June 18, 1983. The idyllic setting of the Tunbridge Wells cricket ground was witness to extraordinary fireworks as Kapil Dev engineered a remarkable victory from the veritable jaws of defeat. Arunabha Sengupta recounts the epic 175 not out that rescued India from possible elimination, and paved the way for the miraculous World Cup triumph.

It has gone down as probably the grandest of legendary cricketing feats of India, told and retold from generation to generation in words of wonderment and awe. As if to add to the almost mythological proportions of the innings, no moving images exist in public domain. BBC was on strike on that spectacular day and no professional video camera recorded Kapil Dev perform that miracle fit for fantastic fables.

It is a pity, an immense loss, but in some ways fitting as well. It allows us to pay homages to a hero with the spark of imagination, much like our recounting of the majestic feats of historical heroes of yore.

This is perhaps one innings that deserves to be embellished by fanciful extrapolation with each retelling, and not suffer from the imperfections of reality the excruciatingly difficult skier missed by Grant Paterson on the boundary when Kapil was in the nineties, a flurry of fortuitous strokes that veered in the air before falling safe in no-man s land, a mingling of mishits that sped to the short boundary on one side aided by the pitch located on the very edge of the square of Tunbridge Wells.

Indeed on one side of the ground there were just singles, fours and sixes. The same strokes gained innumerable threes on the other side. But, every great feat requires dollops of fortune. And whatever be the minor imperfections, this was a supreme innings that took Indian One Day cricket by the scruff of the neck and dragged it to unprecedented, unchartered levels.

A defeat might have meant a very deep hole in the tournament from which India might have never been able to climb out to feature in the semi-finals. And at 9 for 4 and 17 for 5, a loss seemed likely before lunch. In the end, the win demonstrated to the team that the realms of impossibility could be trespassed with utter disdain for the most prominent writing on the wall.

India went on to beat Australia in the next game comprehensively and with conviction. And then they won the semi-final and final in two matches etched in glorious cricketing folklore. But, this was the match to be precise, this was the innings that proved to be the watershed moment in the history of Indian cricket.

There are associated tales of some Indian spectator capturing the action on his hand held video camera. But, if such a film exists, it has escaped the ken of millions of cricket-lovers who yearn to catch a glimpse of the splendid deed. The innings lives on in our fantasies, like the fairy tales it so remarkably resembled.

The Tunbridge Wells cricket ground is beautiful, if quaint and small an hour away from London, tucked away in the Kent countryside. EW Swanton described it as “no mean contender for the most delectable cricket ground in England.”

For such an idyllic setting, it has been the scene of untold violence. In 1913, the pavilion was set on fire by militant suffragettes, amounting to more than a thousand pound in losses. And seventy years later, Kapil Dev set it ablaze yet again with his furious strokes scorching the turf and sizzling through the atmosphere.

The small ground was packed with a large crowd, mainly expat Indians, making their way between the marquees and hospitality tents around the playing arena. And most of them were forever happily singed by the fireworks of Kapil s bat.

The start was anything but auspicious. Kapil called correctly and decided to bat, on a pitch providing bounce and encouragement to seamers. Peter Rawson and Kevin Curran excellent bowlers both in such conditions opened the operations for Zimbabwe and made the ball move sharply off the seam and bounce disconcertingly past wary bats.

Sunil Gavaskar pushed forward defensively down the wrong line, and the very second ball from Rawson caught him plumb in front of the stumps. Partner Krishnamachari Srikkanth tried to pull Curran, and the top edge was taken superbly by Iain Butchart, running thirty metres backwards from mid-on. Neither of the openers troubled the scorers.

Mohinder Amarnath failed to cover an off-cutter from Rawson, and it flew off the inside edge and Dave Houghton dived to his left to make it 6 for 3. Sandeep Patil departed after an outside edge flew to the keeper of Curran. 9 for 4. This was when a rather bemused Kapil Dev walked in to join Yashpal Sharma. And 8 runs later, an outswinger from Rawson got the snick from Yashpal and Houghton threw it up to make it 17 for 5.

Dave Ellman-Brown, Chairman of the Zimbabwe Cricket Union, was now approached by some worried organisers. It was turning out to be a farce and there were dangers of the match getting over by lunchtime. The wise Ellman-Brown advised them that things could change.

Zimbabwe had already pulled off an upset in the first round, beating a beleaguered Australia. With the news of the disastrous Indian start filtering in, the BBC strike notwithstanding, called up Ellman-Brown, intending to do an interview soon. Ellman-Brown s sagacious answer was, “The game isn t over.”

And it was not.

Indian tail was one of the best in the tournament. Roger Binny batted sensibly. Kapil Dev drove, cut and pulled with nonchalance. And Duncan Fletcher, the Zimbabwe captain, probably played his cards wrong by removing both Curran and Rawson from the attack together. He put himself on along with Butchart, and the two medium-pacers could not maintain similar pressure.

Fletcher had taken 4 for 42 in Zimbabwe s upset win over Australia. But today, he did not bowl well. And Kapil took full advantage of the short boundary, threading the field with drives and cuts from one end and flicks and pulls from the other.

At 77, John Traicos struck. The canny off-spinner got past Binny s bat and trapped him leg-before for a steady 22. And a run later, Ravi Shastri was snared by Fletcher. It was 78 for 7 and yet again, there were signs that it could be all over before lunch.

But, as mentioned earlier, India batted deep. Madan Lal was perhaps the most accomplished of batsmen to come out at No. 9. And Kapil continued to blossom. In the words of Alan Gibson, who borrowed heavily from Cardusian imagery, Kapil s innings was built on solid fundaments and was extended to strokes of ingenuity: “The foundations were classical and he put a bloom on the orthodox. He did hit the ball very hard but they were rhododendron-sized blooms. The strokes were correctly conceived and executed.”

By the time Curran returned to get Madan Lal to snick for 17, the partnership was worth 62. The comeback notwithstanding, Curran had been hammered and looked a shadow of his threatening self in the morning. And when Syed Kirmani came in at No. 10 with the score on 140 for 8, the bowling hardly troubled him.

Kirmani had told CricketCountry in an interview,” When I walked into bat after the fall of Madan Lal s wicket, I told Kaps, ‘You just play your natural game” to which he said, ‘Humko 60 overs khelna hai . I told him that I would try my best to hold one end up.”

As Madan had done, the little Indian wicketkeeper excelled at working the ball into gaps and getting Kapil on strike. And the Indian captain struck the ball as cleanly as he was ever to do in his long and distinguished career.

His hundred came off 72 balls, and finally he raced to 175 from just over three hours of exhilarating batting, facing 138 balls, hitting 6 sixes and 16 boundaries. In spite of the shorter boundary where a majority of his fours rebounded off the fence, most of his sixes were struck over the long field.

Apart from Butchart, who managed to keep the ball at the block-hole, all the other bowlers were slaughtered mercilessly mainly with a new bat Kapil used after reaching his century.

The 175 not out stood as the highest ever in a ODI till Viv Richards got past him the following year with 189 at Manchester.

In World Cup tournaments, again it was Richards who went past this feat when he plundered 181 against Sri Lanka at Karachi in the next edition.

The ninth wicket partnership of an unbeaten 126 with Kirmani stood as a world record for 27 years before Angelo Mathews and Lasith Malinga added 132 against Australia at Melbourne in 2010.

As Kapil walked out at the end of the innings, Gavaskar met him with a cup of water. Later the master was to say that this was the best innings he had ever witnessed in a limited-overs match.

The final score of 266 for 8 in 60 overs was an incredible feat after being reduced to 17 for 5 and later 78 for 7. But, by the time Kapil s strokes had stopped reverberating around the countryside, the wicket was playing wonderfully well and the ask was not quite beyond a competent Zimbabwe line-up.

They began well with Robin Brown and Grant Paterson putting on 44 for the first wicket. But the Indian medium-pacers kept striking, and soon the inexperience told and the fledgling cricketing nation was floundering at 113 for 6.

Curran, the immensely successful all-rounder in the county circuit, launched a superb counter-attack, adding 55 with Butchart, and raising hopes of another epochal turnaround. At 230 for 8, with Curran still there Zimbabwe fancied their chances of winning it. But, in the end he lobbed a rather docile catch off Madan Lal. And Kapil Dev ended the match by holding Traicos off his own bowling. Zimbabwe lost by 31 runs.

In a gesture of acknowledgement to destiny, Kapil Dev bent down to kiss the turf of the picturesque ground that had seen him play the most magnificent innings of his superb career. 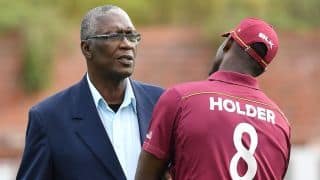