For the first time in the history of the World Cup, the Man of the Match award was shared on this day on October 31, 1987.

For the first time in the history of the World Cup, the Man of the Match award was shared on this day on October 31, 1987. Abhishek Mukherjee looks back at a day at Nagpur when Chetan Sharma created history and Sunil Gavaskar set alight the Vidarbha Cricket Association ground at Nagpur against New Zealand.

At the Vidarbha Cricket Association ground, New Zealand began well against India with John Wright and Phil Horne putting up 46 for the first wicket. Things looked a bit tight at 122 for 4, but Ken Rutherford hung around dourly as Dipak Patel, promoted up the order, scored a brisk 40 – the eventual highest score of the innings.

As Martin Snedden walked out to join Rutherford, Kapil Dev brought Chetan Sharma back. New Zealand were fairly placed at 182 for 5 after 41 overs, all set to go for the big shots in the final overs. Sharma had had a patchy five overs till then, and people were surprised when he was brought back instead of Manoj Prabhakar.

Rutherford played out the first three balls of the over. Sharma ran in to bowl the fourth. He bent his back a bit more to give the ball some extra sting. As Rutherford attempted an uncharacteristic cross-batted on drive to the off-cutter, the ball crashed through the wide gap between bat and pad to hit the middle-stump. First blood to Sharma!

Enter Ian Smith, one of the most destructive wicketkeeper-batsmen of his era. He faced one that kept straight, perhaps a tad low. Smith displayed minimal footwork. He should probably have played forward. Instead, he looked foolish as the ball knocked the off-stump. Two wickets off two balls for Chetan Sharma!

As an elated Sharma rushed towards wicketkeeper Chandrakant Pandit, the crowd got behind him. No Indian had taken an international hat-trick in any format of the game. More importantly, no person had ever taken a hat-trick in a World Cup.

Ewen Chatfield was promoted ahead of Willie Watson. Unlike Rutherford and Smith, who were in floppy hats, Chatfield came out in a white helmet, an act triggered perhaps by Sharma’s extra pace.

After a long, long discussion with his state and national captain for what seemed to be an eternity, Sharma ran in again in quest of a hat-trick. It was another off-cutter. Chatfield missed the line completely. And to add to the drama of the occasion, it had to be the leg-stump that was pegged back this time. It was the first World Cup hat-trick! All bowled! All three stumps hit! The medium pacer from Haryana had redeemed himself after the infamous last ball full-toss at Sharjah just over a year ago.

Though history was made, India’s day was far from over. Snedden and Watson helped New Zealand reach 221 for 9. To top the group that India needed to chase down the target in 42.2 overs — a run rate of 5.25, an uphill task by 1987 standards. What India needed was a fiery start from Krishnamachari Srikkanth. And if Sunil Gavaskar managed to play his usual sheet-anchor role, the strong middle-order might end up hitting a few lusty blows to help India scrape through.

New Zealand opened with debutant Danny Morrison and Chatfield (who ended his career with an economy rate of 3.57). The first two overs had yielded 18, and India seemed to have set off. However, Chatfield came back well when he bowled a maiden to Srikkanth. And as he ran in for his third over, his figures read 2-1-9-0.

In the previous match, with India requiring to score at a fast pace to catch up with Australia on run rate, Gavaskar had crawled to a 114-ball 50 as India had won against Zimbabwe. Kapil had made his disappointment with Gavaskar very clear after the match. In addition, Gavaskar was far from being 100% fit and had opted to pull out, but Chairman of Selectors Bapu Nadkarni had insisted that Gavaskar played the crucial league match.

Playing in the last international tournament of his illustrious career, Gavaskar now launched a furious assault. He hit two straight sixes and two fours off the first four balls in the third over of Chatfield, leaving the entire stadium open-mouthed. Was this really the same man who had carried his bat through 60 overs scoring 36 twelve years back?

The over cost Chatfield 21 runs. He had to be taken away, having conceded 30 from three overs. New Zealand’s most economic bowler had been taken to the cleaners, and this was when they fell apart. The Indian dressing-room stood up in awe as Gavaskar and Srikkanth made merry on the ground. The two wicketkeepers of the squad — Pandit and Kiran More — rushed out and perched themselves on the pitch roller outside the boundary lines to get a closer view.

India raced to 50 from 7.1 overs: Gavaskar (30) had outscored Srikkanth (17). The next 50 came from 6.1 overs, Srikkanth beating Gavaskar to 50, marginally this time, thanks to some incredible hitting against Patel, including a reverse-sweep for four. India were scoring at a breakneck pace. People watched open-mouthed: Srikkanth always batted like this (or at least intended to), but Gavaskar?

Srikkanth rushed ahead of Gavaskar; it eventually took a stunning catch by Rutherford to dismiss him. By then Srikkanth had raced to 75 off 58 balls with nine fours and three sixes, and at the fall of the wicket India had reached an unbelievable 136 from 16.4 overs. Navjot Singh Sidhu, who had scored four fifties in four matches, was held back and Mohammad Azharuddin walked in instead.

It was then that Gavaskar took charge. It was evident that he was suffering from fever as every now and then he squatted on the crease. But he kept on hitting, as the target seemed increasingly closer. He actually smiled with each and every boundary. He had started aggressively, and then had let Srikkanth take charge, but with Srikkanth’s departure, his strokeplay increased as Azharuddin was quite content to give him the strike.

He hit Patel for a few runs, and then hit Morrison and Watson for 2 fours to race into the 90s. He went past his previous highest score of 92 not out scored against Australia at Sydney the previous year. He slowed down a bit in the late 90s, but then, on 99, drove Morrison between mid-on and mid-wicket to reach his maiden One-Day International hundred – in his 107th match. The hundred had come off 85 balls. It was the second World Cup hundred by an Indian after Kapil’s legendary 175 not out and the second-fastest World Cup hundred at that point of time after Clive Lloyd’s famous 82-ball hundred in the 1975 final.

Once the hundred was achieved, Azharuddin hit some brisk blows and eventually hit the winning boundary; India raced to 224 for 1 in 32.1 overs — 61 balls fewer than what they needed. Gavaskar’s 88-ball unbeaten explosion of 103 contained 10 fours and three sixes. The adjudicators did not have an option but to award the Man of the Match to Chetan Sharma and Sunil Gavaskar — the two stars of the match. 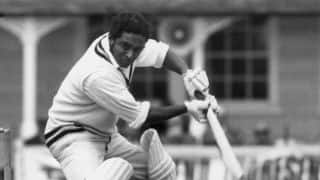