Dean Jones made a dazzling 90. Ravi Shastri went into an inexplicable shell. Rain hit India badly. Mohammad Azharuddin and Sanjay Manjrekar initiated an onslaught. India needed 5 from 4 balls. And then...

March 1, 1992 witnessed the closest margin of in World Cup history as Australia bettered India by a solitary run at The Gabba. Abhishek Mukherjee relieves a humdinger that went till the very last ball.

India and Australia had been at loggerheads in the World Cup since they met for the first time. After being in separate groups for the first two editions, they met at Trent Bridge in 1983, where Trevor Chappell’s hundred guided Australia to a massive 162-run victory. A week later, Roger Binny and Madan Lal claimed four wickets apiece at Chelmsford to inflict a 118-run defeat on Australia and take India to the semi-finals.

Australia started their victorious 1987 campaign with a one-run victory over India at Chepauk thanks to a Geoff Marsh century. Krishnamachari Srikkanth and Navjot Sidhu got India off to a rollicking start, but in vain. Once again India struck back, this time at Kotla, as four batsmen scored fifties and helped India to a 56-run victory.

The 1992 campaign did not start well for either side. New Zealand upset Australia on the first day of the tournament while India lost a close contest against England at WACA. Australia received a rude shock against South Africa, who mauled them by nine wickets on their World Cup debut. India’s second match against Sri Lanka at Mackay, on the other hand, was abandoned after just two balls.

Kapil Dev struck twice after Allan Border chose to bat. Mark Taylor cut one that was a tad low, resulting in a bottom-edge and a low catch to Kiran More; Geoff Marsh started with a flourishing cover-drive, but dragged one on to the stumps. The score read a disappointing 31 for two in the 12th over.

David Boon and Dean Jones took their time to settle down. Boon, one of the heroes of the last World Cup, had to double up as wicket-keeper in the absence of the injured Ian Healy, who had pulled a hamstring in the South Africa match. He tried with a glorious straight-drive past Manoj Prabhakar, while Dean Jones lofted Javagal Srinath into the stands over long-on, and almost immediately dispatched him past square-leg.

Raju struck immediately: Boon, trying to hit against the turn, holed out to Ravi Shastri at short mid-wicket. As Steve Waugh walked out, Azhar brought on Ajay Jadeja to get a few overs out of the way. Jadeja had made an almost forgettable debut at Mackay — a match in which he never took field.

Jones thrived under the extra responsibility. He played strokes all around as Waugh kept returning the strike back to him. Both men were extraordinary runners; the run rate, once below three, now raced above four. Having got rid of his helmet, Jones swept Raju for four to reach a well-deserved fifty.

Srinath broke the partnership, cramping Waugh for room and hitting his leg-stump. Border promoted Tom Moody to ensure runs came at both ends, and it worked. Moody took a special liking to Srinath, but tried one slog too many against Prabhakar; the disguised slower delivery hit middle-stump.

The sunhat now came off as Jones thwacked Kapil to the mid-wicket fence and followed it with two more, taking 16 off the over. He cross-batted swat off Prabhakar cleared the boundary comfortably. Just when it seemed he would take the score well beyond the 250-mark, Jones hit one that went straight up in the air; Prabhakar claimed the catch and accepted it. Jones’ 108-ball 90 included 6 fours and 2 sixes.

The onus was now on Border to take up charge. He moved outside the stumps off Kapil and had a heave that flew over the vacant mid-off. As young Jadeja, fielding at long-off, ran in, he had two choices: stop well before the ball reached him and cut down the boundary, or go for the catch. He chose the latter. He ran and ran, and when he realised he would not be able to reach it, he flung himself forward and came up with a spectacular catch. It was a near-miraculous effort for an Indian fielder given the era.

A few wild swipes followed, and Kapil and Prabhakar claimed a wicket apiece amidst the madness. They finished with identical figures of 3 for 41 off 10 overs each as Australia finished on 237 for 9. It was a gettable target.

Craig McDermott struck early with a yorker: Srikkanth was too slow in bringing the bat down, and when he did, he played the wrong line. The ball hit off-stump as Srikkanth’s bat came down along the line of the leg-stump. Azhar walked out at this stage and took off with a violent square-cut off Mark Whitney.

Azhar greeted Merv Hughes with a dazzling cover-drive, but Shastri’s inexplicable crawl meant that the Indian run rate never took off. He almost got run out as Azhar edged one to the left of Marsh at point and did not respond to Shastri’s call; fortunately for India, Whitney not only fumbled with the return, but also came between Border and the stumps as his captain tried to throw the stumps down.

Shastri exposed his stumps and tried to clear Waugh at cover, but could not quite make it. His 67-ball 25 had almost deterred the Indian chase. Azhar was in regal touch and Tendulkar reciprocated with a pull off Moody, but the huge Western Australian got the little man caught by Waugh at cover.

Azhar promoted Kapil above the specialists, and the ploy worked for a while. As Azhar reached his fifty, Kapil cleared mid-off twice in quick succession. Azhar, meanwhile, unleashed a stroke straight out of Brian Lara Cricket 1999 slog mode, hitting a lofted boundary over the bowler without any footwork.

Waugh foxed Kapil with a straight, slow delivery, trapping him plumb in front of the wickets. India needed 108 from 86 balls at this stage. Little was expected of Manjrekar at this stage: he was, after all, the ubiquitous classicist, had not been in good form, and was making his World Cup debut.

However, he surprised everyone by lofting Whitney over mid-on for four. And runs kept coming.

The asking rate kept mounting. India now needed 67 off 42 — a substantial ask in 1992. Azhar slammed Waugh over extra-cover in the first ball, and followed with another. Manjrekar produced a third boundary, and the target suddenly came down to 52 off 36.

Border turned to Hughes. Manjrekar shuffled across — an aberration given his style — and flicked the ball past deep square-leg. He pushed Waugh to mid-wicket and scampered for a single, but the Australian captain was too quick and accurate: the throw found Azhar short of his crease. His 93 had come off 90 balls, and had included ten fours.

Jadeja walked out for the first time in his international career, but Hughes slid one through the gate and bowled him cheaply. Azhar promoted More above Prabhakar. The match, however, depended entirely on Manjrekar, who simply refused to give up without a fightback. He read Hughes’ slower delivery, stepped out, and dispatched it over long-off for six; the next ball, a full-toss, was leg-glanced elegantly past fine-leg for four more.

There were frantic ones and twos. Then Manjrekar placed one to deep third-man and attempted a risky second; McDermott’s throw was accurate, and Boon, doing a sound job behind the stumps, whisked the bails off with Manjrekar short of the crease. India needed 20 off 12.

Srinath walked out ahead of Prabhakar. There were a few wild slogs; some connected, some did not, and McDermott’s last over went for seven. Whitney had bowled out, as had Waugh. McDermott had bowled the previous over. It was a toss-up between Hughes and Moody. Border opted for the latter.

13 from 6. Moody attempted a low full-toss, and More connected perfectly. The ball went to the right of deep square-leg. Jones flung himself in a desperate effort, but in vain.

9 from 5. Border kept faith on Moody, and did not move Jones. This time Moody did not err in line, but More flicked from middle-stump. It was as outrageous a shot that ever was, and Jones did not have a chance. India suddenly saw a flicker of hope.

5 from 4. Yet again Border did not move Jones. He perhaps wanted to lure More into playing the stroke again. This time Moody bowled a slow, straight, over-pitched delivery; More shuffled across, trying to sweep, exposing his stumps; the middle-stump was flattened.

5 from 3. Prabhakar finally walked out; he pushed one and ran, and Moody, picking up the ball, turned around and tried to run Prabhakar out. He missed it, and Waugh did an excellent job of preventing the overthrow.

4 from 2. Srinath had an almighty heave, but only found Border at mid-wicket. Prabhakar, having started the run, was left stranded as Border tossed it gently to Moody. Prabhakar was run out, but it did not really matter.

The Brisbane crowd mobbed the ground to celebrate. For some reason they had the idea that Australia had won. The ground had to be cleared, and amidst all the pandemonium, with Border triple-checking the number of balls left, the small bareheaded frame of Raju emerged from the pavilion.

4 from 1. No plan was required. There was only one way to go about it. Moody pitched up, and this time Srinath connected; the ball soared, soared, soared to wide long-on, where Waugh, running frantically, perhaps overdid things a bit, running beyond the trajectory of the ball.

Waugh later wrote in Out of My Comfort Zone: “In my eagerness to take the match-winning catch I overran the chance. I had too much time to take the catch, which gave me jelly legs and unhinged my composure.” He grassed the chance as Srinath and Raju kept running like madmen.

One… two… could they run three to secure a tie? Raju punched the air as he kept on running…

Despite dropping the catch, Waugh did not err in the throw: “Fuming from my clumsiness and driven by the cockiness of Raju’s gesture, I launched a bounce throw laced with anger to David Boon with all the force I had in me and ran the batsman out.”

An easy catch. Grassed. Then a run out. And a one-run victory. The players and spectators’ hearts swung to and fro in the span of a few seconds. It was, by a distance, the best match of the tournament, and perhaps an indication of the rivalry between the sides — a relationship that still lingers.

– More shaved off his moustache next day. Rumours (unconfirmed) suggest this was the outcome of a match.
– Australia missed the semifinal berth by a mere point. India came seventh.
– India did not win a World Cup match against Australia till the quarter-final of 2011 at Motera. In between they lost at Wankhede in 1996, at The Oval in 1999, and at Centurion and the final at New Wanderers in 2003.

Man of the Match: Dean Jones. 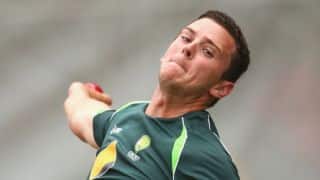