Zimbabwe played with spirit and spunk to defeat England in the World Cup. None of the Men in Red, however, matched the prowess of Eddo Brandes that day.

On March 18, 1992, at the outbreak town of Albury in Australia, underdogs Zimbabwe played with spirit and spunk to defeat England in the World Cup. Bharath Ramaraj looks back at that memorable day in the annals of Zimbabwean cricket.

The thrills and spills of watching a perennial underdog take on the gargantuan task of playing hot favourites and send them spiralling towards a heart-wrenching defeat is something that fans would fondly rekindle for a long time to come. On March 18, 1992, in the World Cup held in Australia and New Zealand, Zimbabwe sent seismic shock waves through the cricketing world by defeating England in a cliffhanger of a contest at Albury.

England had already sailed into the semi-final stage of the tournament by winning most of their games. New Zealand, who were in red hot form during that World Cup was the only team that had beaten England. On the other end of the spectrum, Zimbabwe were a trifle unlucky not to have usurped teams like India and Sri Lanka. However, they were largely criticised for their lacklustre bowling. Their batsmen tended to either play a shot or were rooted to the crease without rotating the strike.

England won the toss and elected to bowl on a bowler’s paradise. The track had plenty of juice in it and there was enough variable bounce too. Zimbabwe lost early wickets and crawled to a score of 134 in 46.1 overs. The experienced campaigner and captain of the side, David Houghton was the only batsman who was able to handle tough conditions on view and essay a knock of 29. He had to use every ounce of experience he had gained over the years to weather the storm and pass the baptism by fire with flying colours. Iain Butchart gave him valuable support with a knock of 24.

For England, all five frontline bowlers took wickets at regular intervals. Ian Botham was the chief wicket-taker with three wickets to his name. It has to be said though, Phil Defreitas was arguably the most impressive bowler on show, as he made the ball move in the air and off the pitch with geometric precision.

Even on a track that had plenty on offer for bowlers, England were expected to cruise towards victory. To make it worse for Zimbabwe, their strike force, Eddo Brandes, known for bowling boomerang bending swing was misfiring. It led to the veteran spinner in the Zimbabwean setup, John Traicos, to work with Brandes in the nets to fix his problems. No one knows whether Traicos had a magic wand in his hand or not, as Brandes came out all guns blazing and made a telling difference to Zimbabwe s fortunes.

It all started with Brandes trapping England captain, Graham Gooch in front with an in-swinging yorker that tailed into him. With England’s prolific batsman back in the hut, it lifted the sagging spirits of Zimbabwe. Omar Shah and Malcolm Jarvis gave Brandes valuable support by keeping English batsmen on a tight leash. But it was Brandes who landed the big blows. He removed the dangerous Robin Smith by shattering his stumps, followed it up by taking the wicket of his friend, Graeme Hick. Interestingly, during the only other game Zimbabwe had won back then in 1983 World Cup against Australia, Hick was 12th man for Zimbabwe.

Neil Fairbrother, suffering from a stomach upset and wicketkeeper-batsman, Alec Stewart put on a painstaking 50-run partnership. But in the context of the game, it was a crucial one. Just in the nick of time of though, Shah and Butchart shared a wicket each to send both batsmen on a long walk back to the pavilion. It opened the floodgates for Zimbabwe to march towards victory.

With the last pair Phil Tufnell and Gladstone Small at the crease, England needed to score at more than seven runs an over. The last pair somehow took England to the final over of the game.

With nerves jangling and hearts pumping, Jarvis bowled the final over. He bowled a well-disguised slower delivery and Small duly obliged by offering a simple catch to Andy Pycroft which was gleefully taken. Zimbabwean players joy knew no bounds. They celebrated like there was no tomorrow. Those-5,000 odd fans who had made a beeline entry into the stadium got their money’s worth.

Zimbabwe after the 1992 World Cup gained Test status. The chicken farmer, Brandes continued to torment English batsmen with his brand of late swing.

England defeated South Africa in a controversial rain-marred semi-final. But the mercurial Pakistan side, with Wasim Akram bowling at the peak of his prowess, proved to be too good for England in the final.

Man of the Match: Eddo Brandes. 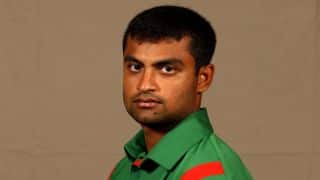 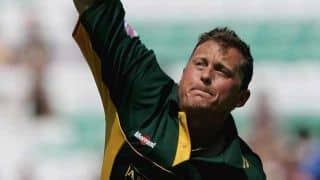