World Cup 1992 semi-final: Were South Africa really robbed of a victory against England?

World Cup 1992 semi-final: Were South Africa really robbed of a victory against England?

A different look at England vs South Africa, World Cup 1992, one of the most controversial exits in World Cup history.

The general perception is that South Africa were deprived of a chance in the semi-final against England at Sydney on March 22, 1992. Abhishek Mukherjee looks at one of the most unusual exits in international cricket.

We all know the story: South Africa were chasing a target of 253 in the stipulated 45 overs; it rained when they reached 231 for 6 after 42.5 overs; two overs were deducted after the interval; once play resumed, South Africa s target remained the same but with 12 fewer balls. They were rendered helpless against a target of 22 from a single ball.

The huge scorecard at SCG, placed between the Coke and Foster s banners, read SOUTH AFRICA TO WIN NEED 22 RUNS OFF 1 BALL. It remains one of the most iconic photographs in the history of the tournament. A million hearts went out to the South Africans that day, more so because they had been an immensely popular side throughout the tournament, what with Jonty Rhodes taking the world of cricket by storm.

The question remains: were South Africa really robbed of a chance? At first glance it seems that it was the archaic rain-rule that caused them a whiff at the final. Indeed, 22 from 13 balls was gettable; had they been deprived of a single over, they might have gone for a target of 22 from 7; but 22 off 1?

Let us consider the (current) Duckworth-Lewis (D/L) method. Had two overs been deducted South Africa s par score would have been 242, which meant that they would have needed 12 from the last ball. That does not seem too gettable either, which means that we had probably fretted over something that was beyond reach anyway.

That, however, is not the entire story. Let us re-live the match and try to find out exactly what had gone wrong with South Africa, or whether anything had at all gone wrong.

The match had started with a ten-minute rain delay, but the overs were not reduced in the England innings. It was decided that the interval would be delayed to 6.10 PM (from 6 PM), and would be shortened by ten minutes. There would be no reduction in the number of overs otherwise.

Kepler Wessels bowled first. Allan Donald took Graham Gooch out early and Ian Botham fell after a blitz, but Alec Stewart and Graeme Hick took control of the situation, scoring runs with ease. Donald was wayward in his first spell, and the calm demeanour of Neil Fairbrother ensured England build up a big score.

Fairbrother was eventually the fourth man dismissed with the team score on 183 in the 36th over, followed shortly by Hick. Allan Lamb and Chris Lewis hit a few blows, but England realised they were running out of time as the hour s hand ticked over to the six-mark and had to resort to desperate measures.

Dermot Reeve came to England s rescue, scoring an unbeaten 25 off 14 balls as England reached 252 for 6 at 6.10 PM. He had helped England score 18 off the 45th over of his Warwickshire mate Donald. In the end, it turned out to be the difference between the sides.

The much-ridiculed rain rule was not the only unusual rule of the tournament. There was another just as bizarre and inexplicable. If the side batting first could bat for only X overs by the time scheduled for them, the match would be reduced to an X-over contest. By that rule, the match was reduced to a 45-over contest.

What if D-L had been in effect and the innings had to be stopped after 45 overs? ESPNCricinfo had done the D/L computation in 2006. As per their calculation South Africa s original target should have been 273 from 45 overs had there been a pause. They started their chase with 253 from 45.

What would have happened if South Africa bowled their 50 overs? Let us check the kind of targets they would have to chase:

Had South Africa bowled those 50 overs they may have been left to score significantly more runs. The exact ball-by-ball break-up is not available, but when the fourth wicket fell on 131 South Africa were already in the 27th over of the innings, requiring 122 in less than 19 overs; when the fifth wicket fell they needed 77 in less than 9; and finally, when Rhodes 38-ball 43 came to an end, they needed 47 from 31 balls.

Brian McMillan and Dave Richardson managed to score 25 from the next 18 balls before rain came in, which left them to score 22 from 13. Had England scored 30 from those last 5 overs South Africa would have required 52 off 43 (62 off 43 if they scored 40 from the last 5) with Richard Snell, Pringle, and Donald being the only men left to bat, which may have given them an outside chance.

No, the situation was still not an advantageous one for South Africa, but it was better than what they were left with. Under those circumstances they were certainly not robbed of a chance to go for the final. If they had to put the blame on anyone it had to be on themselves for bowling 5 overs less.

– England lost their third final in four editions of the tournament when Imran Khan s Pakistan beat them by 22 runs.

– South Africa did not win a single knock-out match in World Cup or ICC World T20 till 2015.

Man of the Match: Graeme Hick. 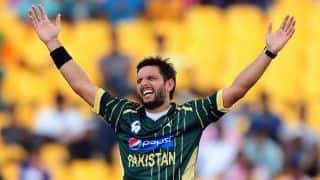