This is the first time that India and Pakistan are playing as one team its history."

February 13, 1996. Australia and West Indies cited security reasons and declined to visit Sri Lanka for their league matches. India and Pakistan, co-hosts of World Cup 1996, sent a combined team to Sri Lanka to play against the hosts, thereby sending a message to the sceptics. Abhishek Mukherjee looks back at a surreal day of cricket when India and Pakistan took field alongside each other.

Australia were not keen on playing Sri Lanka at Premadasa for their league match in World Cup cricket 1996, and neither were West Indies. It can be argued that Sri Lanka were not among the most peaceful nations in the mid-1990s, but both Zimbabwe and Kenya toured Sri Lanka during the World Cup.

However, Sri Lanka needed someone a major team to send the message across to the world regarding the safety; who better could it have been than India and Pakistan, co-hosts for the tournament? India and Pakistan had not played a bilateral series since 1989-90, but would they agree to play in Sri Lanka before the World Cup.

The response was in the affirmative. Not only would India and Pakistan take field at Premadasa, but they would field a combined team. This meant that Sachin Tendulkar and Wasim Akram, Mohammad Azharuddin and Saeed Anwar, Anil Kumble and Waqar Younis would all play in the same side.

They called the side Wills India and Pakistan XI. The players were excited at the opportunity. Azhar, named captain of the side, told Lake House on the day of the match: As far as the game is concerned we are all together. We have come to Sri Lanka to make sure that it is going to be a very successful day today. I hope everyone realises that there is nothing wrong where sport is concerned. Wasim, then Pakistan captain, echoed Azhar s thoughs: We have no fears of any security in Sri Lanka. We are just relaxed and it was like coming to Sri Lanka on a normal cricket tour.

Intikhab Alam, named manager of the side, commented: This is the first time that India and Pakistan are playing as one team its history. I sincerely hope with this match India and Pakistan will resume cricket ties. I hope it is the turning point. It was a tremendous sight to have both Indian and Pakistan cricketers get together at the airport. I don t think you can achieve any better goals than that. We are happy to be here and it is the least we can do for our countries.

Though the match was well-contested, Arjuna Ranatunga expressed his gratitude: The Indians and Pakistanis have showed the World that Sri Lanka is safe to play cricket. They have been very kind enough to come and play good cricket.

Could it get better than this? Was this not what the entire subcontinent had hoped for since Partition to see Hanif Mohammad and Vijay Hazare, Fazal Mahmood and Vinoo Mankad, Sunil Gavaskar and Javed Miandad, Kapil Dev and Imran Khan take field for the same side?

The match got underway, and Romesh Kaluwitharana perished shortly things started caught Sachin Tendulkar, bowled Wasim Akram. Fortunate were the spectators who witnessed Wasim and others huddled around the little man; and blessed was the scorer who recorded that dismissal.

Sri Lanka lost two quick wickets before Asanka Gurusinha (34) and Ranatunga (32) added 70. There was no Aravinda de Silva, and neither Marvan Atapattu nor Hashan Tillakaratne got going; Ashish Kapoor took out both Arjuna and Atapattu, but Kumble, with figures of 8-1-12-4, was easily the leader of the pack. Sri Lanka finished their 40 overs on 168 for 9.

Wills XI lost Anwar and Aamer Sohail; Muttiah Muralitharan took out Tendulkar (36), and with Upul Chandana picking up two quick wickets, they were reduced to 126 for 5, still needing 43. However, Ajay Jadeja and Rashid Latif got together to add 38 before Waqar walked out (ahead of Wasim) to provide the finishing blows.

Kumble was duly named Man of the Match (he got the trophy from the exotically named Sports Minister Dissanayake Mudiyanselage Sumanaweera Banda Dissanayake) while the Wills XI lifted the Wills Solidarity Trophy. The players of two countries that have been considered bitter enemies by the world celebrated the win.

So much for terrorism!

– Australia and West Indies did not change their stand. They declined anyway, and Sri Lanka were awarded full points. They also went on to beat Zimbabwe at SSC, India at Kotla, and Kenya at Kandy in the league matches, England at Faisalabad in the quarter-final, and India at Eden Gardens in the semi-final by comprehensive margins.

– Interestingly, Australia and West Indies the two teams that declined to visit Sri Lanka played the other semi-final at Mohali. Australia edged past West Indies by 5 runs, but were duly beaten in the final at Lahore as Sri Lanka lifted their maiden title.

Man of the Match: Anil Kumble. 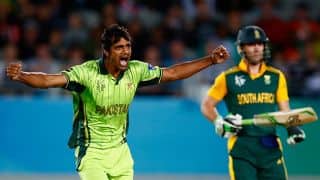