The day Kenya stunned two-time world champions West Indies by a whopping margin of 73 runs during the league stages of the 1996 World Cup. The West Indies’ strong bowling attack had laid the foundation for a comfortable victory, but the batting, despite featuring world-beaters, collapsed to concede victory to the new entrants, despite Tariq Iqbal's shoddy glovework.

On February 29, 1996, minnows Kenya stunned the two-time world champions West Indies by a whopping margin of 73 runs during the league stages of the 1996 World Cup. The West Indies’ strong bowling attack had laid the foundation for a comfortable victory, but the batting, despite featuring world-beaters, collapsed to concede victory to the new entrants. Karthik Parimal looks back at the eventful game.

Nothing matters more than to go down fighting, for associate or affiliate nations that are thrust into the spotlight for the first time on the World Cup stage. It is during this first round of this celebrated tournament that amateurs rub shoulders with the best in business and, more often than not, are satisfied if they come out of the contest scathed but with a performance to be proud of. However, every sport has seen its fair share of minnows triumphing. Six years before Senegal stunned France in the 2002 FIFA World Cup, the cricketing world had already witnessed an upset of such proportions, as new entrants Kenya left West Indies, the two-time World Champions, dumbstruck.

Kenya reduced to an average total

“I have no words right now,” said a dazed Richie Richardson, West Indies’ skipper at the time. And that was understandable, for little did he and his entourage expect to be downed by a novice Kenyan side. On February 29, 1996, the two teams met for a Group A fixture of the World Cup at the Nehru Stadium in Pune, and although it was touted to be a one-sided contest, a decent crowd had turned up for the event. Put in to bat first, Kenya slumped to 81 for 6, before crawling their way to 166. Nonetheless, the total was certainly mediocre and was never going to prick a line-up that featured the likes of Richardson, Brian Lara, Shivnarine Chanderpaul and Jimmy Adams. Or so they thought.

Curtly Ambrose and Courtney Walsh were among the wickets, as expected, and accounted for most of the top-order. However, the total number of extras that had been conceded was 37 — 8 more than Steve Tikolo, Kenya’s highest-scorer in that match. The wayward bowling was a direct reflection of West Indies’ vacillating mindset since the commencement of the World Cup, and the issues came to the forefront in due course of time as the tournament progressed. Also, Kenya’s middle-order batsmen, Hitesh Modi and Thomas Odoyo, put up a defiant partnership and were instrumental in their side going past the score of 150.

Even if the West Indian batsmen just went through the motions against the frail Kenyan attack to chase down 167, one felt they would cruise home. In three overs, Sherwin Campbell and Richardson moved the score to 18, thanks partially to Tariq Iqbal’s horrendous wicketkeeping. Then commenced the collapse. Richardson dragged one onto his stumps off Martin Suji; Campbell was bowled round his legs by Rajab Ali; Lara — who recklessly went after every bowler during his short stay in the middle — edged one to the ’keeper, who held on to it, albeit inelegantly; and Keith Arthurton was run out for nought. The West Indies were reeling at 35 for 4, and this was to be no minor hiccup.

To make matters worse, Chanderpaul failed to put away a loose, short off-break from Maurice Odumbe, and cut it straight to Tikolo at point. At 65 for five, Odumbe struck again, this time having Adams caught at silly-point by Modi. Defeat loomed large upon the West Indies now, and only Kenya’s inexperience combined with Roger Harper’s grit could have pulled them out of the muddle. But, Odumbe drifted one onto Harper’s pads, and in an attempt to steer it to the fine-leg boundary, the latter edged it down the leg to the ’keeper. At 78 for 7, all recognised West Indian batsmen had been dismissed, and Walsh, Ambrose and Cameron Cuffy, alongside Ian Bishop, were left with the gargantuan task of scoring the remaining 85 runs.

Ambrose fell while attempting to snatch a single, Walsh was caught after a bit of juggling by the fielders behind the wicket and Cuffy, the final batsman, was bowled by Ali. The Kenyans had shot West Indies out for just 93. Their joy knew no bounds, and the crowd at Pune appeared to be equally ecstatic, for they knew they’d witnessed a historic game. A victory lap, led by Man of the Match Maurice Odumbe, ensued. “It’s like winning the World Cup. It’s a dream come true. The West Indies are our idols, and to beat an idol is a great thing,” said Odumbe after the celebrations had subsided.

Aftermath of the game

Post this slipshod performance, the West Indies drew heavy flak from the media back home. Lara was castigated for a racist remark, which the southpaw denied making in the days that followed. According to an article in ESPNCricinfo by Martin Williamson, India’s Outlook magazine had published a story of how Lara had told the Kenyans that he didn’t mind losing to them, but why he hated going down to South Africa. The same article also mentioned how Lara’s agent Jonathan Barnett denied the remarks and insisted that Lara went into the Kenyan dressing room and only said, “Losing to you guys hurt badly but it wasn’t the worst day of my life. The worst was losing to South Africa in the 1992 World Cup because I realised we weren’t going to qualify for the semis.”

However, the West Indies recovered well in the tournament to reach the semi-finals, where they surprisingly lost from a comfortable position, against Australia. The Kenyans were handed a heavy defeat by Sri Lanka in their last fixture and duly went back home, but with some fine memories of their clash against the West Indies.

Man of the Match: Maurice Odumbe. 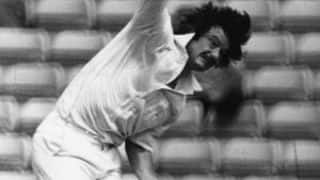