UAE won the battle of the minnows by beating the Netherlands at Lahore on March 1, 1996 in what was the first ODI clash between two Associate Nations. Abhishek Mukherjee looks at the day when they became the fourth Asian nation to win an international match.

[Note: Several records mentioned in the piece are not valid anymore.]

UAE had a rich heritage of hosting cricket: they were the ninth country and the first Associate nation to host an international match; Sharjah Cricket Ground has hosted the most ODIs (216), while no other ground has hosted even 150.

Despite that, Netherlands had done a better job than UAE in World Cup 1996. In their first ever ODI they lost to New Zealand by 119 runs at Vadodara; they scared England for a while before losing by 49 runs at Peshawar; they then lost to Pakistan by 8 wickets at Lahore. However, they lost only 20 wickets from three matches.

UAE, on the other hand, lost to South Africa by 169 runs at Rawalpindi (Gary Kirsten scored 188* still the highest World Cup score; this was also the match where their captain Sultan Zarawani walked out to face Allan Donald without a helmet and was promptly hit on his head); to England by 8 wickets at Peshawar; to Pakistan by 9 wickets at Gujranwala; and to New Zealand by 109 runs at Faisalabad.

The match was originally scheduled to be played under floodlights, but was later changed to a day match. Zarawani asked Netherlands to bat in what was the first ODI between two Associate Nations, and Shehzad Altaf, the bespectacled seamer, soon got the ancient Nolan Clarke for a duck.

A gritty partnership between Peter Cantrell and Flavian Aponso followed. They added 74, but Zarawani was only too happy to let them bat as the overs ticked by. Altaf made excellent use of the conditions. The batsmen struggled as the ball moved around and only Aponso looked comfortable, wrote Wisden.

By the time Aponso hit an off-break from Shaukat Dukanwala back to him, he had scored 45 but had consumed 80 balls in the process. Tim de Leede showed some sense of urgency, but with Cantrell stuck at one end, runs were difficult to come by. Cantrell was eventually claimed by Azhar Saeed as late as in the 41st over; his 47 had come off 106 balls and had included a solitary boundary.

Klaas-Jan van Noortwijk and Roland Lefebvre hit out, but Dukanwala kept striking on a regular basis. He finished with figures of 10-0-29-5 (this included 4 wickets from his last 11 balls). At that time these were the best ODI figures by any bowler from an Associate Nation, the best ODI figures for a non-Pakistani in Pakistan, and the best ODI figures at Lahore. It also remains the only five-wicket haul by a UAE bowler.

Netherlands finished with 216 for 9. While Dukanwala was the hero, Azhar Saeed chipped in with a couple of wickets, and Altaf returned excellent figures of 10-3-15-1.

Azhar Saeed and Saleem Raza went on a rampage in response, adding 94 from the first 15 overs. By the time Azhar Saeed was run out for a sedate 82-ball 32, the pair had already added 117 still the only hundred-run partnership for UAE. Mazhar Hussain fell for a cameo; 3 runs later, Steven Lubbers sent Raza back but not before he had scored a 68-ball 84 the highest score for UAE. He also hit 6 sixes, equalling the World Cup record.

[Note: Raza s 84 stood as the UAE record for 18 years. The highest score currently belongs to Swapnil Patil (99*). The World Cup record for most sixes in an innings is 8, shared by Ricky Ponting, Imran Nazir, and Adam Gilchrist, though Raza shares the record for most sixes by a batsman from an Associate Nation with Dave Houghton, John Davison, and Kevin O Brien.]

If there was any hope of Netherlands coming back into the match after the double-blow, it was smashed to oblivion by some savage butchery from Mohammad Ishaq, who raced to 51 not out from 55 balls with 8 boundaries, Vijay Mehra providing him company. UAE won by 7 wickets in the 45th over. It was the fifth ODI win by an Associate nation (after Sri Lanka in 1979; Zimbabwe in 1983 and 1992; and Kenya in 1996 a day before UAE s win).

Dukanwala and Raza shared the Man of the Match Award. It was only the second World Cup match in which the award was shared (the first occasion had come at Nagpur when both Sunil Gavaskar and Chetan Sharma were named Man of the Match).

– Netherlands lost their last match of the tournament by a whopping 160 runs: Andrew Hudson threatened to break Kirsten s record but finished on a 132-ball 161. They lost 37 wickets in the tournament and managed to bat their full quota of overs every time.

– UAE has won only one other ODI till date, against Hong Kong at Kuala Lumpur in 2014. It remains the record for the longest gap between two ODI wins for any team. However, they have made it to World Cup 2015.

Men of the Match: Saleem Raza and Shaukat Dukanwala. 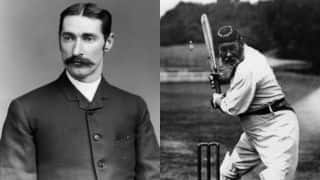 Stuart Binny — can the all-rounder be a trump card for India in ODIs?