Australia had put up 267 in the semi-final at Lahore on November 4, 1987. Despite a long fourth-wicket stand and several cameos down the order, Pakistan lost a battle to Craig McDermott.

In the build-up to the 2019 ICC Cricket World Cup, CricketCountry brings to you the most memorable moments and matches from the Cricket World Cup right from its first edition, way back in 1975. With 76 days to go, in our latest World Cup Countdown, we recall how Pakistan slipped twice to hand Australia an 18-run win in the 1987 semi-final

It was supposed to be a fairy-tale ending to Imran Khan s career: He had been outstanding with the ball throughout the tournament; he had led Pakistan to five consecutive victories before losing an inconsequential match against West Indies; and if Pakistan won this, they would meet India (as the world expected) in the final at Eden Gardens.

Australia had won their first match against India by a solitary run and had barely scraped past New Zealand at Indore. India had their revenge with a 56-run win at Kotla, and Australia had never seemed a side good enough to topple the mighty Pakistanis. Thus, when Allan Border decided to bat, Gaddafi Stadium was full of hopes as Geoff Marsh and David Boon walked out.

Marsh and Boon gave Australia a solid start, adding 73 in 78 minutes. For some reason Imran opened bowling with Jaffar, keeping Wasim Akram away from the new ball. Marsh eventually flicked a ball from Tauseef Ahmed and ran; Boon sent Marsh back, but it was too late: Saleem Malik s direct hit found him short of the crease.

The foundation laid, Dean Jones walked out. The men ran hard, helping lift the Australian run rate. Abdul Qadir trapped Jones plumb in front of the stumps in the 19th over, but Dickie Bird ruled him not out. Jones smashed the next ball through cover for four, and the following ball smashed into Saleem Yousuf s mouth. Yousuf had to leave the field, which meant that Javed Miandad had to don the big gloves.

With 150 up in 30 overs, things looked ominous from Pakistan. It was then that Malik struck against the run of play: the ball was outside leg, and Miandad, sporting a floppy hat, showed amazing reflex to whip the bails off. Malik s over ended with that ball, and when Tauseef bowled a straight delivery to start the next over, Jones tried to cut, missed completely, and was bowled; and Gaddafi erupted.

Mike Veletta joined Border and the pair added a brisk 60 before Mansoor Akhtar struck: Border pushed a ball to cover and ran, and Mansoor threw the stumps down with a nonchalant direct hit. Imran hit leg-stump to dismiss Veletta, and Simon O Donnell lasted two balls before something bizarre happened.

Waugh ran the entire length of the crease, only to find O Donnell standing at the other end. The bails were removed, and Waugh took the long walk back to the pavilion. The umpires, upon inspection, intervened: it was (probably) found that O Donnell, who had left his crease, did not ground his bat, allowing Waugh to overtake him to the crease. O Donnell was ruled out while Waugh stayed back.

With Imran clean bowling Greg Dyer and Craig McDermott in quick succession, Pakistan were in dominating position. Imran handed the ball to Jaffar for the final over and Waugh was ready.

Unbeaten on a 22-ball 14 before the over, Waugh finished with a 28-ball 32 after hammering Jaffar.

Rameez Raja fell in the first over: Akhtar played to cover-point, Rameez ran, and fell short of the crease at the non-striker s end as Border s throw reached McDermott. Akhtar was himself bowled by McDermott shortly afterwards, and when Malik was fooled by Waugh s slower delivery, Pakistan needed 230 from 239 balls with seven wickets in hand.

This was when Imran walked out to join Miandad amidst tumultuous applause. Survival was the first option, and the two senior men went about their tasks diligently. Slowly, surely, they built up the score.

The closer they got to the target, the more vocal Gaddafi Stadium became; they pushed around Reid or singles; waited till the last moment to avoid being deceived by Waugh; and chanced their arms every now and then. They grew in confidence; the strokes became more purposeful and frequent; the hundred came up in the 26th over; and suddenly a victory seemed possible.

Border turned to May, and Imran went after him almost immediately. Miandad responded, reverse-sweeping May for four shortly afterwards, and Pakistan reached closer to the target with every passing over. They needed 118 from 90.

Then Border brought on himself, Imran went for a wild slog, and was caught-behind for an 84-ball 58. The pair had added 112.

The match was far from over. Imran promoted Wasim above Ijaz Ahmed. Miandad reached his fifty, and when McDermott came back, Wasim thwacked him over his head, over the fence, and slog-swept Border for an encore. Then Billy took charge, flattening Wasim s stumps as he gave him the charge once too many.

But they still had Miandad, and a teenaged Ijaz, who paddle-swept Border for four almost immediately. Unfortunately, he holed out to Jones at deep square-leg, trying to clear the fence off Reid. Miandad carried on, taking the fast bowlers by the horns, before Reid struck: Miandad moved his left leg out of the way to clear deep mid-wicket, but Reid knocked his off-stump back. They still needed 56 from 36. Miandad s 70 had taken 104 balls.

Yousuf and Qadir now came together. They kept on playing their strokes, adding 24 in 16, but Yousuf was eventually caught-behind off McDermott for a 15-ball 21. Qadir and Jaffar ran like madmen, and Qadir even had an inside edge going for four, but the task remained a daunting one.

Eventually, with 21 to score from 11 balls, Jaffar went for a heave and was caught-behind off McDermott. Four balls later McDermott had Tauseef caught-behind to pick up the first, and only five-wicket haul of the World Cup, was named Man of the Match, but most importantly, he clinched a semi-final victory against Pakistan in their captain s hometown in what was scheduled to be his last match. It does not get bigger than that. 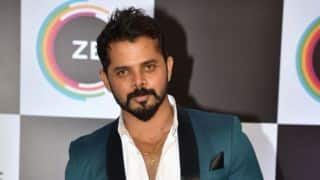