Graham Gooch knocked the then-defending champions out of the 1987 World Cup.

In the build-up to the 2019 ICC Cricket World Cup, CricketCountry brings to you the most memorable moments and matches from the Cricket World Cup right from its first edition, way back in 1975. With 75 days to go, in our latest World Cup Countdown, we recall how Graham Gooch knocked the then-defending champions India out of the 1987 World Cup.

India were the defending World Champions. India, after losing by a solitary run at Chepauk, had won five matches all of them convincingly on the trot before the semi-final. India had chased down 222 in 32.1 overs in their last league match against New Zealand at Nagpur. India were playing at home. In short, India were clear favourites going into the match at Wankhede.

England, too, had decent outings. Though they had lost to Pakistan twice, they had managed to win everything else (including beating the West Indians twice). Unfortunately, in their two defeats, Abdul Qadir had picked up 7 for 62; in other words, they were circumspect against quality spin.

India had two successful spinners in their ranks: while Maninder Singh had been the most successful spinner of the tournament, Ravi Shastri had proved to be the perfect foil. India had every reason to be optimistic with Kapil Dev and Manoj Prabhakar to share the new ball and the mercurial Chetan Sharma as back-up.

They were also optimistic of retaining the World Cup. Pakistan were the side they were scared of, and the arch rivals had been eliminated the day before at Lahore by the Australians. If they went past England, India would certainly not lose to Australia. The World Cup was India s to be taken; it was only a matter of time.

Unfortunately, India they received a major blow just before the match when Dilip Vengsarkar, the finest batsman of the era, was ruled out due to a stomach infection. Chandrakant Pandit, always considered good enough to play as a specialist batsman, replaced him.

Did Kapil err in bowling first on a true wicket under clear, blue sky with his ace batsman absent? One can criticise in retrospect, but for a few overs it seemed that he had been right. Kapil rapped Gooch on the pad in the first over, but the umpire remained unmoved. Thereafter Gooch kept the scorecard ticking, and added 40 in 76 balls with Tim Robinson.

Maninder struck first. He tossed one up to Robinson, who stepped out, and was beaten in flight; he made one final lunge, but the ball beat his bat, and Kiran More removed the bails. It was the perfect left-arm spinner s wicket. Maninder kept flighting the ball up to Bill Athey, but when he did the same to Gooch, he responded, as if on cue, by sweeping him mercilessly towards fine-leg with productive results of varying magnitude.

Athey struggled against Maninder before he drove one off Chetan, and More gobbled up the inside edge. England were in trouble of some sort at 79 for 2 when Gatting walked out to join Gooch. It was then that Gooch took control. As Gatting later recalled in an interview with ICC Cricket, Graham Gooch practised for two days by sweeping the left-arm spinners at the nets. He kept playing the shot in front of square and behind square at the nets and got ready for the game.

Donning a sunhat, the trademark moustache, broad wrists, and gritted jaws, Gooch kept sweeping the two left-arm spinners at various angles to either side of fine-leg. Maninder used variations in flight; Shastri bowled flatter; but they kept leaking runs to Gooch s clinical execution of the sweep.

Gatting provided perfect support. When Kapil tried Azhar (who had often provided him with the breakthrough), Gatting cut him ferociously. When the spinners bowled outside off, Gatting responded with well-timed drives and deft steers. The bearded demon from 1984-85 had come to conquer India again.

The situation called for drastic measures, and Kapil brought himself back. Gooch placed him past third-man for four. Shastri tried to contain Gatting by bowling outside off, and the England captain reverse-swept for four. He tried to loft Maninder over extra-cover, and a fortunate edge ran for four, but he ran out of luck next ball: he tried to sweep one from outside off against Maninder; he connected, but the ball hit leg-stump. 196 for 3. The pair had added a match-changing 117 in 19 overs, and Gooch, past his hundred, was looking ominous.

Allan Lamb joined Gooch, but finally Maninder struck, breathing life back to the Indian side: Gooch tried one sweep too many; the ball took his top edge and flew to Krishnamachari Srikkanth at deep square-leg, who accepted the chance gleefully. England were 203 for 3, but Gooch, with his 136-ball 115, had probably caused enough damage.

John Emburey, Phil DeFreitas, or Paul Downton did not play big innings, but they managed to give the strike back to Lamb when it was required. Lamb hit hard and ran like a maniac, and though Kapil claimed a couple of wickets towards the end, his 29-ball 32 not out helped England reach a formidable 254 for 5.

Would it be enough? The players returned to the dressing-room for lunch, as did the umpire. The ball-boys (among whom was a young Sachin Tendulkar) got some well-earned rest as well.

The match was a special one for Sunil Gavaskar. Not everyone gets a chance to play a World Cup semi-final in his hometown. Imran got an opportunity the day before, but squandered it. Surely Gavaskar would not waste this opportunity? Surely he would mastermind the chase, having scored his maiden One-Day International (ODI) in his previous match?

Rumours were abuzz. Gavaskar did not want to play at Eden Gardens following the behaviour dished out to him during the Tests against West Indies in 1983-84 and against England in 1984-85. He had opted out of a Test and an ODI against Pakistan at Eden Gardens, which was the venue of the final. Would he ensure India did not qualify to avoid playing at the ground?

Whatever it was, it did not matter. When a trademark Gavaskar leg-glance set sped to the fence at familiar pace, Wankhede knew it was the Little Master s match. Then it happened: the ball pitched on a length outside off and made its way through the gate ; Gavaskar was bowled for 5. The Sunil Gavaskar Stand at Wankhede sank into silence.

Navjot Sidhu, who had earned a penchant for hitting big sixes (he had scored fifties in all four innings he had batted in the tournament till then), found himself at the crease. With Srikkanth going strong at the other end, Sidhu decided to drop anchor, and the pair made a cautious start.

Gladstone Small supported DeFreitas well, and with Srikkanth flashing at the occasional loose delivery for four, runs kept coming. Gatting introduced Emburey, and Srikkanth immediately cut him for four. Then came Neil Foster, and Srikkanth, trying a heave across the line, missed and was bowled. The pair had added 51. India required 197 from 209 balls.

Azhar flicked and glanced with nonchalant ease, and suddenly there was a flurry of runs. There was a brief interruption when Lamb caught Sidhu beautifully at cover off Foster, but Pandit, with his nimble footwork and elegant strokeplay, kept the chase on with a flick off Foster and a sweep off Eddie Hemmings for fours.

Runs came quickly. Azhar and Pandit took 27 off three overs from Hemmings. India reached hundred, and required 134 from 130 when Foster ran in to bowl to Pandit; the gap was in England s favour, but with Shastri, Kapil, Prabhakar, and More (and even Chetan) to follow, the match was in the balance.

Pandit tried to flick a slower delivery from Foster but was deceived in pace; he played too early, and the ball hit his front pad. Kapil promoted himself above Shastri. Azhar cut Foster for four; Kapil leg-glanced DeFreitas for four more; they ran hard, and suddenly the target came down to 96 off 104. The advantage clearly lay with India.

Kapil bludgeoned Hemmings to the mid-wicket fence, which made Gatting push himself back. Kapil tried an encore, and hit the next ball straight to Gatting. The English captain threw the ball in the air as his Indian counterpart fell for a 22-ball 30. India needed another 87, and one could not help but think Kapil should have stayed for another half an hour.

The onus to see India through now fell on Azhar. He had Shastri, the man who could switch between first and fifth gears with ease, for company. Azhar dismissed DeFreitas to the fine-leg fence and pushed Emburey to backward point to bring up his fifty. He hit one back extremely hard to Hemmings, who could not hold on to it; they required 71 from 72.

Azhar unleashed an exotic cut past point off Emburey to tilt the equation further in India s favour. Shastri joined in the fun, stepping out and slog-sweeping Emburey for four more. Surely they could pull off 51 from nine overs with five wickets in hand?

Then came the big blow: Azhar tried to paddle-sweep Hemmings and missed the line completely; Hemmings went up in a loud shriek, and the umpire responded. Azhar had scored 64 off 74 balls, and surely Shastri would marshal the rest of the line-up (that included Prabhakar, More, and Chetan) to pull it off.

But More did not last: he tried to loft Emburey, who moved quickly to his right to pull off a blinder with one hand. Small came back to replace Emburey as the latter finished his quota, and almost immediately Shastri slogged him past mid-wicket for four. Unfortunately, Prabhakar attempted a slog off the last ball of the over, and was caught-behind. 34 off 30, but Shastri was still there.

Chetan took a wild swipe off Hemmings; he had connected it well, but Lamb took a brilliant ran and dived to pull off a brilliant catch at deep wide mid-wicket. Then, with only Maninder to support him, a desperate Shastri went for the big hits, but the mistimed heave could only lob to square-leg; Downton ran to pouch it, and a billion hearts sunk as the defending champions were knocked out of the tournament. 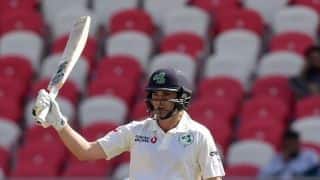