On March 18, 1992, at the outbreak town of Albury, underdogs Zimbabwe beat England.

In the build-up to the 2019 ICC Cricket World Cup, CricketCountry brings to you the most memorable moments and matches from the tournament over the years right from its first edition, way back in 1975. With 67 days to go, in our latest World Cup Countdown, we relive how Zimbabwe‘s Eddo Brandes helped bowl his team to a famous win over England during the 1992 World Cup.

You would be hard-pressed to locate the outback town of Albury on the map, but for one day during the 1992 World Cup it was the scene of a memorable Zimbabwean victory.

On a pitch that kept low and had variable bounce, England bowled out Zimbabwe for 134 in 46.1 overs with David Houghton’s 29 the best score. Ian Botham and Richard Illingworth claimed three wickets each on a lively track, and that was what worked in Zimbabwe’s favour when it came their turn to bowl.

Leading the way was the chicken farmed turned fast bowler Eddo Brandes who swung the ball savagely to mastermind a dramatic England collapse. First to go was the skipper Graham Gooch to the first ball of England’s chase, out lbw to a low-inswinging yorker, and then the wickets of Allan Lamb (17) and Robin Smith (2) had England sweating at 42/4. (READ: 1992 – Pakistan end New Zealand’s winning streak in a must-win clash)

Soon afterwards, Brandes got past the defence of his best friend, Graeme Hick, whom he had warned only the last evening: “Good luck tomorrow, but I think you’ll be my bunny.”

Brandes ended with 4/21 and, despite the lower-order resistance, England fell nine runs short in what was the biggest reversal of the World Cup, and Zimbabwe s first ODI against England ever.

Zimbabwe after the 1992 World Cup gained Test status. The chicken farmer, Brandes continued to torment English batsmen with his brand of late swing.

England defeated South Africa in a controversial rain-marred semi-final. But the mercurial Pakistan side, with Wasim Akram bowling at the peak of his prowess, proved to be too good for England in the final.

Man of the Match: Eddo Brandes. 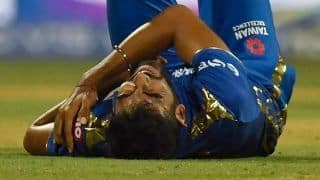