New Zealand's unbeaten run at the 1992 World Cup was ended by an inspired Pakistan team.

In the build-up to the 2019 ICC Cricket World Cup, CricketCountry brings to you the most memorable moments and matches from the Cricket World Cup right from its first edition, way back in 1975. With 68 days to go, in our latest World Cup Countdown, we relive how Pakistan produced an all-round show to end New Zealand‘s winning streak at he 1992 World Cup

The New Zealand juggernaut rolled along throughout the tournament, winning seven matches on the trot. Let alone win, no team managed to challenge them to a fight: Martin Crowe, with his bat and tactical acumen, led the way; he promoted a belligerent Mark Greatbatch to the top; opened bowling with Dipak Patel; and used a pack of four medium-paced allrounders (Chris Harris, Gavin Larsen, Willie Watson, and Rod Latham). The Kiwis unbeaten till then in the tournament were the team to beat.

Halfway through the World Cup, nobody gave Pakistan a chance to reach the semi-final, let alone lift the trophy. They turned things around as the tournament progressed, and though kept winning matches, they never looked like a World Cup winning outfit till their eighth match.

Pakistan needed to win against New Zealand and also hope Australia would beat West Indies later that night. It was under these circumstances that Imran Khan went out to toss with Crowe, and put New Zealand in.

Greatbatch launched himself into Aaqib Javed in the second over of the match, leg-glancing and flicking him for fours before lofting him over long-on for six. Latham cut Wasim Akram for four before edging one to first slip off Aaqib; the first wicket had added a mere 23, but they were only in the fourth over.

Wasim responded by trapping Andrew Jones leg-before with a low full-toss, and followed it with the big wicket: he pitched one up on leg-stump, and Crowe, who could have hit easily for four, holed out to square-leg. Ken Rutherford dug in, but the runs stopped coming, though Greatbatch kept finding the gaps with his cuts and pulls.

Imran introduced Mushtaq Ahmed; Mushtaq controlled the ball as if on a thread, and put the googly in the mix to keep the batsmen at bay. Greatbatch and Rutherford added 46, mostly due to nudges and pushes by the former; Rutherford edged one off Imran, but Moin Khan dropped a sitter behind the stumps. His 35-ball struggle of 8 ended when he pushed one to point and ran, only to fall short of Wasim s throw.

With Mushtaq almost impossible to score off, Harris went for a drive to one outside off; it was ruled a wide, but Moin s deft glovework found Harris short of the crease. Then Greatbatch tried to sweep Mushtaq, but the ball flew straight to Inzamam-ul-Haq at fine leg. Greatbatch s 42 had taken him 67 balls.

Imran brought one back in from just short of good length; it was too good for Ian Smith. The ball that crashed on to the stumps probably reminded old-timers of King Khan of the 1980s. Finally, when Patel was caught brilliantly by Mushtaq at point off Aamer Sohail, New Zealand were left reeling at 106 for eight. Of the top eight, only Greatbatch had managed to go past 10.

Thankfully for them, Morrison hung around with Larsen and the pair managed to add 44 for the ninth wicket to give the score some respectability.

Morrison finally edged one to first slip off Wasim. Watson hung around with Larsen, helping him to add another 16 before Larsen gave Wasim the charge, yorked himself, and was dismissed for 37. New Zealand, bowled out for 166, fell 10 balls short of the stipulated 50 overs.

Morrison s first ball was a fast bouncer. Sohail went for the hook, top-edged, and Patel took an easy catch at deep fine-leg. Sohail was not happy, for replays suggested the ball might have bounced above shoulder-level, which was a no-ball as per the 1992 laws. Steve Randell, standing at square-leg, ruled him out.

Morrison bounced again, but Inzamam was ready: he immediately hooked him through square-leg for four. The next one jagged back from just short of a length and clean bowled Inzamam. Pakistan were 9 for 2 in the third over: did New Zealand sniff victory at this stage?

Rameez, still innocuous at the other end, was joined by Javed Miandad. Lopsided partnerships involving Miandad usually end up having on the winning side, but this was Rameez s day. He flicked and on-drove Morrison for fours to begin with. Shortly afterwards, Miandad hit one back to Patel, who, diving to his left, could not hold on to the catch. The score remained 28 for 2. Miandad was on 3.

Patel continued to trouble Miandad, though Rameez played him comfortably, and lofted him over mid-wicket for four. He was almost as good as Mushtaq, and finished with figures of 10-0-25-0. Watson came along, and the pressure was lifted with Rameez driving him for fours.

Morrison came round the wicket and bowled short-pitched deliveries, but Miandad was competent enough to handle the awkward bounce. Crowe brought on Harris and Larsen, but they did not have much of an impact on Rameez, who kept feasting on anything pitched short. Latham came on and was driven imperiously through cover.

As Pakistan brought up their hundred in the 31st over, Crowe brought Morrison back for the last roll of the die. Rameez did not slow down: Morrison tried to bounce him, but Rameez kept on pulling. Morrison eventually trapped Miandad leg-before though not before he had scored 30 and helped Rameez to put up 115 in just approximately 33 overs.

Saleem Malik walked out, and Rameez continued with his cuts, pulls, and drives. With Morrison, Patel, and Watson all bowling through and the match as good as over, Crowe did not want to risk his specialists before the semi-final. Rameez brought up his hundred in the 41st over; Pakistan had scored only 142 by then.

Not only was it the second century of the tournament for Rameez, but he also became the second batsman to score three World Cup hundreds (after Viv Richards). Things turned a bit lighter after that with Jones, Rutherford, and even Greatbatch rolling their arms.

Rameez eventually finished things off with a wild hoick over mid-wicket. He remained unbeaten on a 155-ball 119 with 16 fours. He could well have been the Man of the Match, but the adjudicators decided to go with Mushtaq. 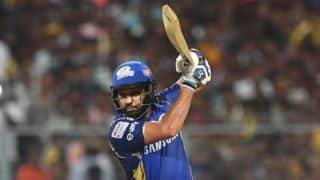