While South Africa walloped UAE, the match is more remembered for a record century from Gary Kirsten and UAE captain's daring act.

In the build-up to the 2019 ICC Cricket World Cup, CricketCountry brings to you the most memorable moments and matches from the tournament over the years right from its first edition, way back in 1975. With 63 days to go, in our latest World Cup Countdown, we recount the match when UAE captain walked out to bat wearing a floppy hat against Allan Donald

South Africa started the 1996 World Cup as one of the strongest teams and faced United Arab Emirates in their opening clash. While the Hansie Cornje-led outfit didn’t drop a sweat while walloping their opponents, the match is more remembered for Gary Kirsten becoming the first World Cup centurion from South Africa and a daring, almost foolish, act from UAE’s captain Sultan Zarawani as he walked out to bat wearing a floppy hat while facing Allan Donald.

South Africa were put in to bat on a pitch that was kept under the covers for four out of previous six days and openers Andrew Hudson and Kirsten led a solid start at the Rawalpindi Cricket Stadium on February 16. The pair was separated after 60 runs with Johanne Samarasekera removing Hudson on 27.

Cronje joined Kirsten and together they built a century stand for the second wicket, adding 116 runs. Crojne fell to his opposite number, after hitting 57 off 62.

Kirsten continued his assault on the hapless UAE bowlers and in the company of Daryl Cullinan, who was happy to allow his partner hog the strike, lead South Africa to a massive 321/2 in 50 overs.

Kirsten scored an unbeaten 188 off 159 with the help of 13 fours and four sixes before. After surpassing Viv Richards’ record for the highest individual score at the World Cup (181), he was also eyeing the all-time record, also held by the West Indian legend (189*). He needed four runs off the final delivery of the SA innings off which he managed just two.

UAE’s meek replay saw them surrendering to the might of Allan Donald (3/21) and Brian McMillan (3/11) as they slumped to 68/6. It was then that Zarawani walked in to the surprise of everyone, wearing a hat.

Donald immediately sent a bouncer and Zarawani took his eyes off the ball. He was struck on the head with his hat knocked off. Concerned SA fielders gathered around him to enquire his wellness.

Zarwani said he was ‘fine’. He eventually fell to McMillan for a seven-ball duck. The pair of Arshad Laeeq (43*) and Shaukat Dukanwala (40*) resisted to ensure UAE weren’t bowled out, finishing on 152/8. 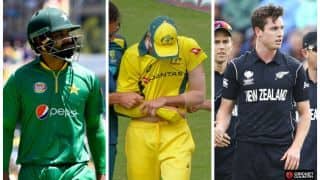