In the build-up to the 2019 ICC Cricket World Cup, CricketCountry brings to you the most memorable moments and matches from the tournament over the years right from its first edition, way back in 1975. With 57 days to go, in our latest World Cup Countdown, we take a look back at March 9, 1996 when Brian Lara scored a century in the quarter-finals to eliminate South Africa.

Two-time World Cup winners West Indies stumbled through the 1996 edition. They began by beating Zimbabwe in Hyderabad, then lost to India in Gwalior followed by a walkover against Sri Lanka. Then came the upset to minnows Kenya in Pune, which left West Indies tied with Zimbabwe and Kenya.

Eleven days after their Pune debacle against Kenya, West Indies came up against the tournament favourites, South Africa, in a World Cup quarter-final encounter in Karachi that no-one truly believed they could win.

Having been roundly criticised for his display against Kenya, Lara made amends in stunning fashion. South Africa s decision to rest their spearhead Allan Donald in favour of an extra spinner, Paul Adams, proved profitable for Lara as he thrived on spin.

Adams was cut and paddled for fours to reach his half-century, and then he took Pat Symcox for 22 in the 28th over. With Shivnarine Chanderpaul, who made 56, Lara put on 138 in 148 balls to set the stage for a late assault. A couple off Symcox gave Lara his hundred, and he was soon out for 111 off 94 balls, with 16 fours.

Symcox and Adams conceded 109 from 18 overs, with Lara scoring heavily.

West Indies made 264/8 and beat South Africa by 19 runs with their own spinners, Jimmy Adams and Roger Harper, sealing the deal.

Man of the Match: Brian Lara. 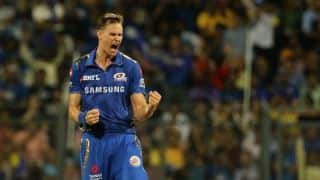