Sachin Tendulkar received the news of his father's death on the eve of India's second match of the ICC World Cup 1999.

In the build-up to the 2019 ICC Cricket World Cup, CricketCountry brings to you the most memorable moments and matches from the tournament over the years – right from its first edition, way back in 1975. With 53 days to go, in our latest World Cup Countdown, we rewind to the day when Sachin Tendulkar deliveries one of the most emotional moments on a cricket field.

At the 1999 World Cup, Sachin Tendulkar scored an unbeaten 140 against Kenya at the County Ground in Bristol after losing his father a few days ahead of the game.

That century kept India alive at the quadrennial tournament

After India began their World Cup campaign with a defeat to South Africa, Tendulkar received the news of his father’s death on the eve of the second match, against Zimbabwe.

As India got ready to face Zimbabwe on May 19, a shocked Tendulkar took the flight back home for the funeral.

In his absence, India slumped to an embarrassing defeat against Zimbabwe. India were left to win their last three matches to qualify for the Super Sixes.

Tendulkar flew back to England to answer their calls.

Kenya put India in to bat. Tendulkar batted at no. 4 and Ramesh led India to a solid stand with 44 before he was the second man dismissed in the 21st over when Tendulkar walked out to join Rahul Dravid.

Apart from the grief, Tendulkar was dealing with a niggling back injury and the possibility of India facing an early exit.

Tendulkar started calmly and got into flow with a drive down the ground off Thomas Odoyo for a four. Forming a good stand with Dravid, Tendulkar kept working the strike over. The glorious drives and paddle sweeps also made an appearance as he warmed up for a big innings.

In the 35th over, he knocked one down the ground to move to fifty amidst huge cheers. He looked up to the sky and raised that bat to the heavens for the very first time.

Picking his opportunities, Tendulkar lofted against the line on the leg-side. There was some calm within, but one could sense his sorrow.
His assault took India closer to a run-a-ball as the last 10 overs approached.

His strokeplay through the leg-side was dominant; dismissive even. By the 44th over, he had sped away to 98. He drove the gentle medium-pace of Steve Tikolo through mid-off and set off for a quick two. This was the first ton of that World Cup. Tendulkar completed the 100th run and looked up to the heavens. The crowd and his teammates stood up to applaud the effort.

Post a ton came a few delightful strokes through the off-side and he finished the innings with a six over mid-wicket off the last ball. India had piled 329/2 in their 50 overs, with Tendulkar remaining unbeaten on 140 off 101 balls.

Little did anyone notice that Dravid had also hit 104 off 109 deliveries.

India went on to win the game by 94 runs. 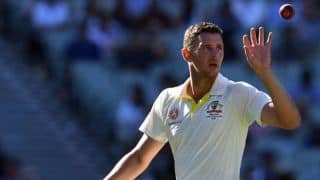