Brian Lara made his final international appearance at the ICC World Cup 2007 as West Indies faced England in the Super Eights.

In the build-up to the 2019 ICC Cricket World Cup, CricketCountry brings to you the most memorable moments and matches from the tournament over the years right from its first edition, way back in 1975. With 29 days to go, in our latest World Cup Countdown, we rewind to the day when Brian Lara took field in international cricket for one last time

Brian Lara made his final international appearance at the ICC World Cup 2007 as West Indies faced England in the Super Eights.

England opted to field and West Indies openers Chris Gayle and Devon Smith put on 131. When Gayle was dismissed for a 58-ball 79, loud cheers went up. It was partly because of Gayle s fine attacking knock, but the actual reason for the merriment was because Lara was walking on the field for one last time. In a warming gesture, England gave Lara a guard of honour.

Lara kick-started his innings with a vintage square-drive off Andrew Flintoff. His next boundary was a fine flick. It was all too easy for him. The third boundary was an impetuous glide through keeper Paul Nixon and wide second slip Andrew Strauss.

With the crowd anticipating something special, their hopes crashed with a loud thud when Lara was run out in the 31st over. Marlon Samuels hit Stuart Broad towards mid-on and called his partner for a single. But, having realised that he had hit the ball too hard, Samuels changed his mind mid-way. Lara was out run-out. Sport often has a cruel way to say goodbye to its most revered servants. Don Bradman comes to mind. At Kensington Oval, Lara s premature exit was sheer bad luck. As he was walking towards the dressing room having scored 17-ball 18, the world wonders what might be going through his mind over the run-out.

West Indies scored 300. England s run-chase was controlled by Michael Vaughan s 79 and Kevin Pietersen s fifth ODI century. The match was a see-saw affair. Off the final over, England needed four. Dwayne Bravo got it down to two off two. Lara addressed his final gesture in international cricket. He got the field in. Broad peppered the off side field taking the aerial route and winning the game for England.

The spotlight shifted to Lara. He thanked the crowd for all their support. In the post-match presentation Lara said: I ve had a tremendous time playing for West Indies my dream was to see West Indies cricket stay on top and not doing that has been the most disappointing thing. And finally he had the crowd shouting when he asked them Did I entertain? The crowd responded with a loud roar. Today's Best Pick 11 for Dream11, My Team11 and Dotball - Here are the best pick for Today's match between CSK and DC at 8pm 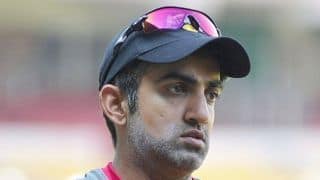