In purely sporting parameters, the Reliance World Cup of 1987 was more pivotal than 1983.

In the build-up to the ICC Cricket World Cup 2019, CricketCountry brings you the most memorable moments and matches from the tournament over the years right from its first edition, way back in 1975. With 15 days to go, in our latest World Cup Countdown we recap the third fourth of the tournament, held in 1987 in India and Pakistan.

India s success in 1983 prompted the country s administrators to bid for staging rights for the 1987 World Cup, an event that marked the first significant shift in the balance of power in international cricket. The past three World Cups had all been held in England, acknowledged as the inventors of the game, and it was with a degree of trepidation that outsiders viewed the subcontinent s ability to host such a big event.

There was much opposition from the purists, who cited the major travel required across the breadth of the India and Pakistan as well as the flat, dry pitches prepared.

Even though neither India nor Pakistan made the final, the Reliance Cup drew more eyeballs, was more tensely contested, and was by far a more vibrant affair than its three predecessors held in England. It was a huge success in terms of cricketing revenue and media coverage and brought the Indian subcontinent under limelight as one of the perspective homes of cricket. Title sponsor Reliance pumped in Rs 2.2 crores, and each Test-playing nation received the guarantee money of 200,000 while qualifiers Zimbabwe collected 170,000.

Viv Richards, writing in Sportsweek, deemed the tournament a success: The Reliance Cup was a wonderful experience and barring a few places, the organisation was excellent. The support from the spectators was overwhelming and as performers, the cricketers should have had very few complaints, it at all. I think the Reliance Cup effectively quashed the belief that a tournament of this nature could be stage-managed in one country only.

This time around, due to the shorter daylight hours on the subcontinent, games were 50 overs per innings, not 60. This was also the first time neutral umpires were appointed.

At 21 venues, India hosted 17 matches, including a semi-final and the final, while Pakistan hosted ten matches. India were expected to go far, given their success in Australia in 1985, but having qualified by playing in a weaker group they struggled against tougher sides. Their batting was collectively dazzling but it appeared their stars were swayed between big-hitting and constructive batting.

Pakistan, co-hosts, bolted out of the stables and won their first give matches thanks to largely to Imran Khan and Abdul Qadir only to fall apart in the semi-finals.

West Indies and New Zealand were recovering from the absences of their strike bowlers yet made themselves heard of intermittently. Sri Lanka were still something of a fledgling team and appeared overawed at the occasion, Zimbabwe still appeared na ve even if their fielding drew applause.

England somehow managed to overcome the heat and food and a big-hearted bowling attack but lost the plot in the final against an unfancied Australian team that, through sheer energy and perseverance, and the consistent David Boon (447 runs at 55.87), Geoff Marsh (428 at 61.14), and Craig McDermott (18 wickets at 18.94), trumped the odds and set into motion an era of domination that would one day see them win three World Cups in a row.

The Australian team that arrived in India looked different from the side that had surrendered the Ashes nine months earlier. Marsh and Boon gave them tremendous starts, Dean Jones was consistent thereafter; Steve Waugh and Mike Veletta could score quickly in the middle, and this masked over the limited success of Border the batsman.

In purely sporting parameters, the Reliance Cup of 1987 was more pivotal than 1983. 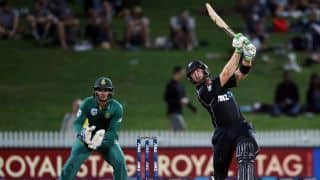