World Cup Countdown: A history of the 1999 World Cup

World Cup Countdown: A history of the 1999 World Cup

The best Test team in the world was crowned ODI champion, the first time since in 16 years.

In the build-up to the ICC Cricket World Cup 2019, CricketCountry brings you the most memorable moments and matches from the tournament over the years right from its first edition, way back in 1975. With 12 days to go, in our latest World Cup Countdown we recap the seventh edition of the tournament, held in 1999.

The idea behind the World Cup returning to England was to revive interest in the 50-over game in the country. However, the host country made no impact at all.

Just 16 days into the World Cup, with 21 to go, England were ousted and hardly anyone in the country even knew.

That the remaining matches found spectators, and a $51 million profit was declared, is testament to the success of the tournament. Adding the most flavour were Indian, Pakistani and Sri Lankan expats, whose vibrancy was unrivalled in the history of World Cups held in England. Though there was some criticism of the loyalty of these British Asians, most infamously by the Tory cabinet minister Norman Tebbit, it became evident that it was this community that loved their cricket the most.

Thus the 1999 World Cup was deemed a success despite a new format that initially appeared attractive but whose flaws became evident as the tournament progressed.

Having failed at the summit four years earlier, Australia at one stage of the summer looked set to crash out of the World Cup. Defeats to New Zealand and Pakistan meant Steve Waugh s team had to beat West Indies to progress to the Super Six, a complex round that replaced the quarter-finals, and they did so stirringly to gain some momentum. They had a bit of luck, for a tied semi-final granted them access to the final on the basis of a superior net run rate than South Africa.

The idea behind doing away with quarter-finals credited to Terry Blake, the England and Wales Cricket Board s marketing head – was to make the tournament format smoother than 1996. Ironically, more matches were played this time around and compared to a 33-day tournament in 1996, the summer of 1999 lasted 37 days, with matches also played in Holland and Scotland.

Blake s idea divided 12 teams into two groups of six with the top three from each progressing to the Super Six round. This wasn t an entirely appreciated move, because teams could only carry forward points earned against the two other qualifying teams from that group.

For instance, India and Australia advanced without points despite having earned six in the league. Attracting further criticism was the rule applied to the epic tie-breaker in the Edgbaston semi-final, which Australia won owing to a superior net run rate of + 0.358 compared to South Africa s + 0.174. It was yet another disappointing end for South Africa, who had blazed their way through the first half of the tournament.

The Associate teams gained little from this tournament, even though Bangladesh stunned Pakistan in an inconsequential match at Northampton. West Indies were outright failures, and there were flashes of brilliance from New Zealand, Zimbabwe and South Africa along the way as heavyweight teams like India who were always struggling after a shaky first round – and Sri Lanka disappointed.

New Zealand, without being flashy, worked their way into the semi-finals on the basis of some sharp cricket, especially from their seamers in favourable conditions: Geoff Allott s 20 wickets were a tournament highlight and broke the previous record of 18.

South Africa began strongly but petered out before making the semis, in which they were ousted in that most thrilling of ties, arguably the best ODI ever. Zimbabwe were the biggest surprise of the summer, beating India and South Africa and so nearly making the final four. Leading their cause was the allrounder Neil Johnson, one of the successes of the tournament.

Pakistan landed up in the final despite losing three games in a row, one in the league and two in the Super Six stage. When it mattered, however, they trampled over Zimbabwe and New Zealand to qualify for the final. But the final was a one-sided affair with Australia running away to victory. Pakistan could only muster 132 as Warne mesmerised again with four wickets, dismissing Ijaz Ahmed, Moin Khan, Shahid Afridi and Wasim Akram from nine overs. This performance earned him the Man-of-the-Match award.

The first World Cup final, at Lord s 24 years earlier almost to the day, had lasted nearly ten hours. This one lasted a little over five. The best Test team in the world was crowned ODI champion, the first time since in 16 years that a side had earned that title. 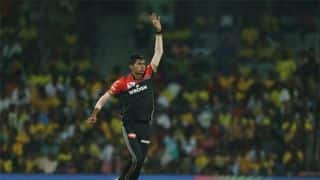 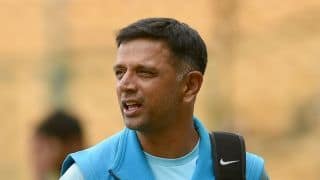 Taking wickets in middle overs during World Cup will be important, India lucky in that regard: Rahul Dravid