There was a lingering feeling that this was a World Cup that should have delivered a lot more.

In the build-up to the ICC Cricket World Cup 2019, CricketCountry brings you the most memorable moments and matches from the tournament over the years right from its first edition, way back in 1975. With 11 days to go, in our latest World Cup Countdown we recap the eight edition of the tournament, held in 2003.

Unfortunately, the 2003 World Cup will be remembered for various controversies.

England and New Zealand refused to play their respective matches in Zimbabwe and Kenya, citing security fears, and the matches were eventually awarded to host teams. The political situation in Zimbabwe and atrocities of the Robert Mugabe regime were brought to the fore, most emphatically by Andy Flower and Henry Olonga who wore black arm bands during a match to protest the death of democracy under Mugabe s regime.

Shane Warne tested positive in a drug test, a day before Australia s first match, and a few Indian players had to battle sponsorship issues back home before making it to the final World Cup squad.

By 2003 Australia were at the height of their powers and the World Cup proved a cakewalk for a champion side. The reigns had been handed over from Steve Waugh to Ricky Ponting, and this unit won all of their 13 matches as they cruised to their third and second successive World Cup title and a $2 million kitty.

India had played some exciting cricket to reach the summit but they proved no match for Australia. Ponting simply demolished their attack, scoring 140 from 121 balls as Australia surged to a 125-run victory.

From an African perspective, it was disappointing that neither South Africa nor Zimbabwe qualified beyond the first round. South Africa, hosting their first international sports competition since the 1995 Rugby World Cup, were utterly disappointing. They lost their opening match – which included a splendid century from Brian Lara by three runs, paying the price for a slow over rate, and remained dogged by inconsistency the heavy defeat against New Zealand must still rankle until Mark Boucher suffered a mind-block in a rain-affected match against Sri Lanka.

The hosts, who had pumped so much into the organistion of the event, were incapable of even progressing to the Super Six stage.

(World Cup Countdown: Adam Gilchrist walks after being given not out)

West Indies were unlucky not to progress, Pakistan never got going, Sri Lanka had an excellent start but then declined, Bangladesh were very poor, and England paid the price for forfeiting their game against Zimbabwe. New Zealand rallied and then folded, crucially, against India whose campaign, barring the final, campaign was the stuff of dreams.

Having lost to Australia, they strung together a memorable run of 10 wins from 12 matches until they ran into Ponting and Co again. The fast bowling was overall very efficient and the batsmen lived up to expectations. Their win over Pakistan was one for the ages and extended their dominance over their geographical neighbours to a fourth World Cup. In short, India were too good for everyone bar Australia.

There were memorable moments: Sachin Tendulkar swept the Man-of-the-Series prize for his 673 runs in 11 matches, Chaminda Vaas netted 23 wickets from 10, Canada s John Davison slammed a record 67-ball century against West Indies, Kenya reached the semi-finals, and there were memorable centuries and bowling efforts along the way that enthralled fans. Overall the tournament was deemed a success for its inventive style of coverage that led to increased viewer participation and a profit of $194 million was announced, a huge increase on the $51 million made in 1999, but the organising drew much criticism.

Overall, due to Australia s Bull Run, there was a lingering feeling that this was a World Cup that should have delivered a lot more. 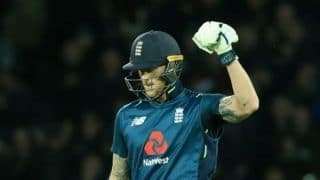