The tournament will be remembered for the end to Australia’s famous run of 34 unbeaten matches.

In the build-up to the ICC Cricket World Cup 2019, CricketCountry brings you the most memorable moments and matches from the tournament over the years – right from its first edition, way back in 1975. With 9 days to go, in our latest World Cup Countdown we recap the 10th edition of the tournament, held in 2011.

Originally, the ICC World Cup 2011 was to be co-hosted by India, Pakistan, Sri Lanka, and Bangladesh. Unfortunately, the International Cricket Council (ICC) decided to leave Pakistan out, which resulted in India hosting eight more matches than what they were previously allocated, Sri Lanka four, and Bangladesh two. Pakistan proposed ICC to allow the 14 matches to be hosted in UAE, but it was rejected.

The tournament will be remembered for the end to Australia’s famous run of 34 unbeaten matches (this included 32 wins, a tie, and an abandoned match) when they went down to Pakistan at Premadasa.

They lost to India in the quarter-final at Motera as well, and were knocked out of the tournament. It was the first time since 1992 that a World Cup final (or a semi-final) did not feature Australia.

This was also the first edition of the World Cup in which The Decision Review System (DRS) was implemented. There was a controversy over DRS in the match between India and England at M Chinnaswamy when Ian Bell was ruled not out lbw due to the relatively obscure 2.5 feet rule. The rule had to be changed midway during the series. Elsewhere, at Mirpur, Bangladesh fans hurled stones (erroneously) at the West Indies team coach.

The top eight teams all made it to the quarter-finals, and though the results were mostly predictable, England managed to light the tournament up with probably the most intense matches of the group stage: they just about pulled off a chase against Netherlands (with eight balls to spare), tied with India, failed to defend 328 against Ireland after having them at 111 for five, defended 171 successfully against South Africa, could not defend 226 against Bangladesh when the hosts required 57 from the last two wickets, and with West Indies requiring 22 with four wickets in hand, they allowed only three more runs.

South Africa managed to extend their winless streak in World Cup knockout matches to five, while New Zealand, after reaching their sixth semi-final in ten editions, lost their sixth. Two of the quarter-finals were outrageously one-sided, as Sri Lanka and Pakistan demolished England and West Indies, both by ten wickets.

The final began dubiously, as match referee Jeff Crowe could not hear Kumar Sangakkara’s call during the toss and MS Dhoni had to spin the coin again. Mahela Jayawardene scored a dazzling hundred, but Gautam Gambhir’s 97 and Dhoni’s unbeaten 91 clinched the title for India. 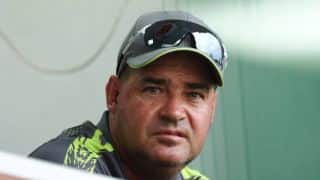