Tendulkar's innings proved the impetus for India to seal their place in the World Cup final.

In the build-up to the 2019 ICC Cricket World Cup, CricketCountry brings you the most memorable moments and matches from the tournament over the years right from its first edition, way back in 1975. With 22 days to go, in our latest World Cup Countdown we rewind to March 30, 2011 when India met Pakistan in the mother of all World Cup semi-finals.

There was no 100th international century for Sachin Tendulkar, but his scratchy 85 proved the impetus for India to seal their place in the final against Sri Lanka. Relieved twice by the third umpire on 23 and dropped on 27, 45, 70 and 81 Tendulkar lived a charmed life as Pakistan rallied through Wahab Riaz to keep India to 260.

Riaz was instrumental in removing Virender Sehwag for a 25-ball 38 after he had looted Umar Gul for 33 in three overs, and later in removing Virat Kohli, Yuvraj Singh and MS Dhoni in quick succession.

Tendulkar was not as aggressive as Sehwag – who hit eight four off Gul, and five in one over – but cut and drove Riaz four boundaries to suggest he was in strong nick. But then on came the Pakistan spinners, and on a Mohali track assisting the slowness of the ball, Tendulkar struggled.

On 23, he had an lbw verdict reversed and a stumping appeal go upstairs. On 27, Tendulkar was dropped at midwicket when he pulled a low catch to Misbah-ul-Haq. Moments after Mohammad Hafeez lured Gautam Gambhir out of his crease, Tendulkar was dropped by Younis Khan at cover. Pakistan captain Shahid Afridi looked on ruefully, while Tendulkar hung his head and retook guard.

A lofted cover drive took Tendulkar to another half-century and he looked a relieved man.

After the Wahab-induced collapse that saw Kohli slashing to point and Yuvraj Singh bowled for a golden duck courtesy a vicious inswinger, Suresh Raina again held his nerve to remain unbeaten on a very crucial 36 off 39 deliveries, leaving India to defend 260.

Wahab ended a terrific display of left-arm pace by adding Dhoni and Zaheer Khan to finish with a career-best 5/46 in a World Cup semi-final.

India’s total appeared disappointing after the start they had gotten from Sehwag and Tendulkar on a flat pitch, but Pakistan’s muddled approach to chasing under lights ultimately helped the home team extend their World Cup record against their arch-rivals to 5-0. Pakistan veterans Younis and Misbah had contributed to four chances given to Tendulkar during the afternoon, and when the sun set their go-slow tactics put pressure on the younger players as India s bowlers tightened the screws.

Dhoni admitted after the match that he had misread the pitch and erred in omitting R Ashwin for Ashish Nehra, but the move proved a masterstroke as the left-arm pacer took 2/33 in ten overs. 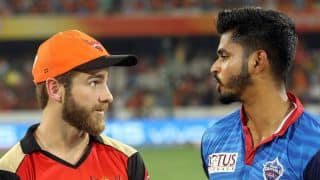