In the build-up to the 2019 ICC Cricket World Cup, CricketCountry brings you the most memorable moments and matches from the tournament over the years right from its first edition, way back in 1975. With 23 days to go, in our latest World Cup Countdown we rewind to March 25 when New Zealand beat South Africa in the third quarter-final of the World Cup in Dhaka.

It was unbelievable. Or was it? Having played brave, attractive cricket all tournament, South Africa stumbled when it most mattered.

Yet again, in a knock-out situation, South Africa combined to choke.

Having done so well in the field to keep New Zealand to 221, South Africa choked. From the comfort of 108/2, with Jacques Kallis well set on 47, they contrived to lose eight wickets for 64 runs in 19.3 overs.

It began with Kallis pulling Tim Southee out to deep midwicket where Jacob Oram took a good catch, and continued as JP Duminy was bowled playing a horrible shot and AB de Villiers was run out by a bullet throw from Martin Guptill. New Zealand fought valiantly, led by Nathan McCullum and Oram, fielded like champions, never let up the pressure, and booked themselves in the semi-finals for the fifth time.

Few would have imagined it, but such was South Africa s fragility and New Zealand s temerity. 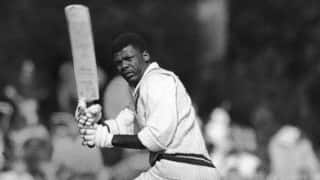