Pakistan collapsed to a meagre 132 in the final, leading to an 8-wicket win for Australia.

In the build-up to the 2019 ICC Cricket World Cup, CricketCountry brings to you the most memorable moments and matches from the tournament over the years right from its first edition, way back in 1975. With 46 days to go, in our latest World Cup Countdown we rewind to the 1999 World Cup final at the iconic Lord’s venue in London.

If Australia‘s first title was a close encounter, the second one was a one-sided affair. Pakistan captain Wasim Akram won the toss, which probably was the only thing that went right for them and elected to bat.

Pakistan sorely missed the services of an in-form Yousuf Youhana and neither Inzamam-ul-Haq nor Ijaz Ahmed was in good nick. Shane Warne ran through the batting line-up as Pakistan were bowled out an over short of the 40-over mark for a paltry 132. Warne finished with figures of 9-1-33-4 to follow his 10-4-29-4 in the semi-final, which took his series tally to 20 wickets; he would finish as the joint-highest wicket-taker along with Geoff Allott.

Despite the presence of ODI legends like Akram and Saqlain Mushtaq in the side, Pakistan s biggest hope was probably Shoaib Akhtar; he had, after all, knocked the wind out of New Zealand in only the previous match.

The onslaught did not stop. Gilchrist hit 4 boundaries in the next 3 overs to bring up his fifty in 33 balls. With the score on 75 after 10 overs, a desperate Wasim turned to Saqlain. Gilchrist s innings came to an end as he drove to Inzamam (who somehow managed to injure himself while taking an easy catch) at mid-off, but his 49-ball 54 had already knocked Pakistan out of the match.

As the forlorn Pakistani supporters left the ground, the Australian supporters celebrated in joy; Darren Lehmann and Steve Waugh grabbed the stumps; and a legacy that lasted over a decade began. (ALSO READ: A run-out chaos and a tie, Australia steal South Africa’s thunder in Birmingham)

Steve Waugh joined Clive Lloyd, Andy Roberts, Viv Richards, Gordon Greenidge, Alvin Kallicharran, and Deryck Murray as the only ones to win the World Cup twice, though Moody was also a part of the 1987 team that won the World Cup.

Man of the Match: Shane Warne

Man of the Series: Lance Klusener 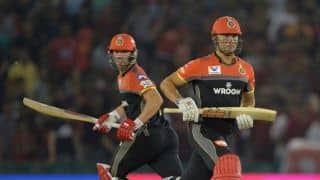