Shoaib Akhtar had hit 100 mph in 2002, but the speed gun was dismissed as unreliable on that occasion.

In the build-up to the 2019 ICC Cricket World Cup, CricketCountry brings to you the most memorable moments and matches from the tournament over the years right from its first edition, way back in 1975. With 45 days to go, in our latest World Cup Countdown we rewind to the 2003 World Cup at Cape Town where Shoaib Akhtar broke the 100-mph barrier, officially!

February 22, 2003. The match between England and Pakistan at Newlands could well have been just another World Cup encounter with a one-sided outcome, unless Shoaib Akhtar did not choose the match to create history.

Waqar Younis gave Wasim Akram the first over after Nasser Hussain opted to bat and let Shoaib share the new ball. Wasim had Marcus Trescothick caught-behind off the last ball of his second over. Nick Knight played out five dot balls of the next over. Then Shoaib ran in for the sixth. The ball to Nick Knight did not look special: it was slightly short-pitched, and Knight nudged it to leg-side. The giant scoreboard at Newlands showed 100.2 mph (161.3 kmph). Shoaib had hit 100 mph in 2002, but the speed gun was dismissed as unreliable on that occasion.

It was not a fluke. Shoaib wrote: I made a conscious attempt to sustain my speed till the very end, twisted and swung my arm appropriately and released the ball at the speed of 161.3 kmph; I had broken the 100-mph barrier.

The rest of the innings passed without much ado. England lost Knight and Hussain early as well, but from 59 for 3, Michael Vaughan and Alec Stewart added 51; once again a double-blow reduced England to 118 for 5, but Paul Collingwood dug in, with Andrew Flintoff for support. (ALSO READ: When Pakistan succumbed to spin maestro Shane Warne)

The pair added a quick 42; a few slogs from Craig White and Ashley Giles followed; and Collingwood eventually took England to 246 for 8 with a brilliantly paced 73-ball 66 not out. Despite bowling the fastest ball, Shoaib took maximum flak, conceding 63 off 9 overs with only Vaughan s wicket to show.

Shahid Afridi started in characteristic style, hoicking Andy Caddick over long-off for six off the fifth ball he faced. He edged the next to Stewart. Thereafter Anderson took over: moving the ball in the air at reasonable pace, he had Inzamam-ul-Haq caught at third slip; bowled Yousuf Youhana (later Mohammad Yousuf) with a fast yorker; trapped a shuffling Saeed Anwar leg-before; and four balls later, had Rashid Latif caught-behind. (ALSO READ: A run-out chaos and a tie, Australia steal South Africa’s thunder in Birmingham)

White and Flintoff took out 4 wickets at the other end, and when Shoaib walked out to join Saqlain Mushtaq, the score read a hopeless 80 for 9 after 25.5 overs. With nothing to lose, Shoaib went ballistic, and by the time Flintoff ran through his defence, he had raced to a 16-ball 43 with 5 fours and 3 sixes. It remains the highest score by a No. 11 batsman in ODIs.

Pakistan lost the match by 112 runs.

Man of the match: James Anderson. 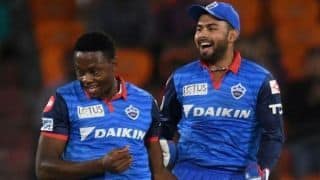