A statistical run through of the highest attendances on Test grounds.

What better way to list the highest attendances at cricket grounds on World Population Day? Abhishek Mukherjee runs a scan.

It was January 6, 1977 when a near-capacity Eden Gardens (we are talking huge numbers here) had turned up to watch India take on England. India needed 21 to save the innings-defeat with three wickets in hand; they did add 36 and were defeated by ten wickets by Tony Greig’s Englishmen. Later that year the same ground was full to watch amidst heavy showers to watch Pele play.

On World Population Day, then, let us have a quick run through the highest attendances on Test grounds. The source for most of these is, of course, the Wisden Almanac.

[Note: Official data is not always reliable. Eden Gardens, even as late as in the 21st century, had at least 10% more people than its actual capacity of 90,000. In the 1996 World Cup semifinal between India and Sri Lanka, for example, people sat on the concrete staircases as the seats were full to capacity (this columnist had been fortunate enough to acquire a seat). I have used estimated counts.]

Though facilities at Eden Gardens have improved considerably before World Cup 2011, it has reduced the capacity to 66,349. Let us consider the other grounds separately.

The first match does not come as a surprise, but the second, a group match, certainly does — given that the attendances for the three finals of the tournaments between the same opponents were 28,190 (SCG), 42,430 (MCG), and 19,210 (MCG). 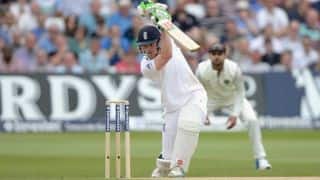