The shortcomings of the Indian bowling department are well known and it’s also quite obvious how this can turn out to be a handicap for the team in a tournament as big as this. Apart from Ravichandran Ashwin, the rest of the bowlers have blown hot and cold more often than not. 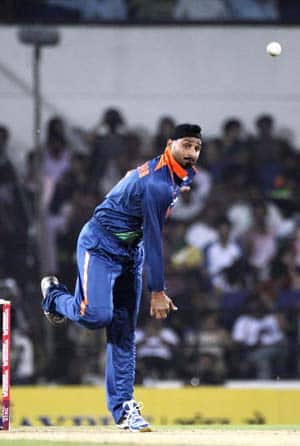 Harbhajan Singh’s bowling continues to be a worry on his comeback, as his figures of 4-0-40-0 earlier this week against Pakistan in the warm-up game suggests © Getty Images

The shortcomings of the Indian bowling department are well known and it’s also quite obvious how this can turn out to be a handicap for the team in a tournament as big as this. Apart from Ravichandran Ashwin, the rest of the bowlers have blown hot and cold more often than not. When the opposition goes on to register a victory with five balls to spare, despite stuttering at 91 for five while chasing a mammoth total of 186, it’s high time that the bowling unit puts on its thinking cap. While it’s known that the Indian side has gone on to win major tournaments owing primarily to its batting, it does not augur well to neglect the chink in the armour every single time.

After running through the Sri Lankan batting line-up in the warm-up fixture prior to the one against Pakistan, Irfan Pathan has yet again failed to carry the momentum forward. His inability to deliver under pressure has been a conundrum even in the past and it’s baffling how he lets the situation get the better of him. Agreed, the format is unpredictable and the bowler can go for plenty when it’s not his day, but to register figures of 3.1-0-40-0, especially after a performance that read 4-0-25-5 in the previous match, is a cause for concern.

Irfan was drafted into the side to function in tandem with Zaheer Khan. But the former has often showed signs of wilting under pressure. There wasn’t much hullabaloo about the first warm-up match against the Sri Lankans and hence there was hardly any pressure involved. But any game against Pakistan, friendly or international, is followed with great interest all over and the pressure factor eventually kicks in. It’d have done Irfan’s confidence a world of good going ahead into this series had he come up with at least a respectable performance. However, it now remains to be seen how badly his morale has taken a beating after the treatment dished out by the Pakistani batsmen.

Harbhajan Singh is another bowler who hasn’t impressed after his return to the national colours. He was carved over mid-off for a six by Kamran Akmal in his very first ball of the spell, and the spinner never recovered from that blow. There is nothing startling in a bowler being attacked right from the start in this slam-bang version of the game, but what matters is his response to the continuous onslaught. However, Harbhajan seemed to go back to his old and trusted method of firing the ball at the batsman, as soon as he was attacked, rather than giving it some loop. Figures of 4-0-40-0 at the end of the day should hence not come as a surprise.

The other known crack that was exposed in the Indian armour, during the warm-up game against Pakistan, is its fielding. It’s no secret that India, despite having some swift legs on the field in the form of Virat Kohli, Suresh Raina and Rohit Sharma, the team also has some slow-movers who tend to concede extra runs. Zaheer, Laxmipathy Balaji and Ashwin are prime examples. While the three can add a lot of value in the bowling department, the fact remains that they could possibly undo all the good work with their below-par fielding.

Nevertheless, the squad has been chosen and the Indian think-tank must now evaluate how it can make the best use of the available resources. The Indians are in their comfort zone as long as they play seven batsmen and four bowlers. But it’s high time they realise that they do not require a batting line-up as deep as that, especially when they’ve got the likes of Virender Sehwag, Kohli, Raina and Mahendra Singh Dhoni featuring in that list. Moreover, India’s last three T20 games, including the warm-up fixtures, hasn’t seen them lose more than five wickets. It’s time to back the top six batsmen and play the extra bowler.

Replacing the seventh batsmen not only gives India more options, it also cuts out the risk of a part-timer going for plenty. Or in some cases, if the part-timer is delivering and mainstream bowlers like Irfan and Balaji are taken to the cleaners – as was the case during the match against Pakistan – someone like Ashok Dinda can come in and bolster the attack. It also gives Dhoni the option of utilising a frontline bowler in the middle and death overs.

T20 cricket is not just about posting mammoth totals on the board and resting the feet, but it’s also about the ability of the bowlers to make the opposition toil for every single run. Sides have gone on to defend modest totals like 130 or 140 in the past, and there’s no denying the fact that we’ll see more such games. Balance is essential, irrespective of the format, and it’s time India realises that, especially with just a day to go before they kick-start their campaign.

World T20: India will have to overcome anxious moments against Afghanistan