Wallt Grout has a urinal named after him at the SCG.

Wally Grout, the champion wicket-keeper, is probably the only one with the distinction of having a urinal named after him at Sydney Cricket Ground (SCG). Abhishek Mukherjee relives a few memories of the legend.

Despite the imposing name, Arthur Theodore Wallace Grout was a livewire on either side of the stumps. There was a reason for him earning the nickname “The Voice.” An extremely popular figure, he was liked by players, fans, and critics alike. While Don Bradman compared him to Don Tallon, he was hero-worshipped by Barry Jarman — the man he kept out of the Australian side. He was the first to effect 20 dismissals in a series thrice; became the first to take six catches in a Test innings; and became the first to take eight catches in a First-Class innings.

There were few who could match Grout on and off the field. When Prime Minister Robert Menzies addressed him as “Grouty,” our hero had the cheek to respond that Menzies had just lost the votes of him and his wife. When Gubby Allen addressed him as “Grout,” the man responded with “Allen, you can call me Wally or Mr Grout, but never Grout.”

The same Grout challenged Alan Davidson by standing up to the stumps at Madras. When a fuming Davidson bowled a fast, wide one outside leg, he caught it and stumped Man Sood in one fluid motion. When Bobby Simpson scored 311 at Old Trafford (Australia were 1-0 up) and refused to declare till well into Day Three, he was barracked by the crowd. Grout came out on the balcony and shouted back: “Remember The Oval, 1938?”

Grout had refused to take the bails off to run out Fred Titmus when the latter had collided with Neil Hawke while running. His late cut had dislodged the bails at Melbourne in the iconic Frank Worrell Trophy of 1960-61. He ran two, leaving the home side to score only two with three wickets in hand. Once again he put up a display of sportsmanship, deliberately hitting the ball high and not looking back for the catch to be taken.

This was the same man who (along with Neil Harvey) tried to be too adventurous with the camera at Wanke Games Reserve, and ended up being chased by lions and elephants. He got away, but a heart attack (he could never quit cigarettes or alcohol; he even worked for Pall Mall) claimed him at 41.

His last wish of scattering his Ashes over his beloved Gabba was fulfilled. They also named a large-seeded barley variety after Grout. “Named after the formidable Australian wicket keeper Wally Grout, the variety is high yielding, quick maturing and disease resistant,” wrote SeedQuest.

However, the greatest (and perhaps unprecedented) tribute came from Sydney Cricket Ground, when they decided to name urinals after him. Puritans may not be happy, but if you knew Wally, he would have sported a proud smirk. 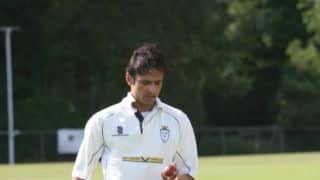 Asad Ali: I never got a proper chance to prove my worth in international cricket