Would Yuvraj, Sehwag, Zaheer, Harbhajan and Gambhir have made a difference to Team India?

Would Yuvraj, Sehwag, Zaheer, Harbhajan and Gambhir have made a difference to Team India?

One defeat against a formidable Australian side and India's dream got crushed.

It’s not advisable to use ‘ifs’ in sports and it’s a fact that till Thursday, India were touted as the joint best side in the ICC Cricket World Cup 2015 along with New Zealand. One defeat against a formidable Australian side and a dream got crushed.  The slogans of “We won’t give it back” went in awry and Indian skipper MS Dhoni summed it well after the semi-final, “Nobody owns the World Cup. We took it from someone and someone has taken it from us.” (READ: MS Dhoni: There was pressure but we needed to bat well as our batsmen know how to chase over 300)

With India’s defeat, fans began to talk in terms of several “what if”. From Anushka Sharma’s presence to Virat Kohli’s ads to MS Dhoni’s approach, everything was discussed. But on Thursday, Yuvraj Singh, India’s hero in the World Cup 2011, was trending on Twitter. The reason was that most fans thought India missed his talent and experience. They recalled his heroics against the same opposition in the quarter-final of previous edition and compared it to the display of the side on Thursday. (READ: Australia vs India, second semi-final in Sydney in caricatures)

When the five wise men picked the final Indian 15 for the World Cup early January, they didn’t feel Yuvraj would have made any difference to the current side. The fact was ignored that he is a proven match-winner and was still scoring heavily in the domestic circuit. That wasn’t all. Along with Yuvraj, the other notable omissions were four other India’s most celebrated cricketers, Virender Sehwag, Gautam Gambhir, Zaheer Khan and Harbhajan Singh. (READ: Millions of cricket fans in India, but how many can claim to be sensible cricket fans?)

The decision drew mixed reactions as most felt that they were missed, while many did feel it was time for the younger brigade to go ahead with the job. India’s campaign in the World Cup is over but did India miss their big five stalwarts?

Let’s start with the bowlers:

He did torment Australians in the past and they don’t really like the look of his. Harbhajan has been a champion bowler for India, but he surely wasn’t missed. Ravichandran Ashwin didn’t let Harbhajan’s absence being felt. Ashwin picked up 13 wickets in the campaign at an average of 25.4 and a healthy economy rate of 4.3. Also, like Harbhajan, Ashwin was reliable with the bat lower down the order.

One of finest Indian seamers of all-time, Zaheer, who was the highest wicket-taker in 2011 edition, would still have made a difference — if only his body had supported him. The way Indian seamers bowled ahead of the tournament, it did seem that even a half-fit Zaheer would have made a difference, but that wasn’t the case. The pace-trio of Mohammed Shami, Umesh Yadav and Mohit Sharma were more than impressive, and their show was one of the highlights of the World Cup.

Shami filled Zaheer’s absence as the strike bowler, picking up 17 wickets at an average of 17.3 and an economy rate of 4.8. Umesh picked up 18 wickets, while Mohit chipped in with 13.

Playing the Ranji season for Delhi, Gambhir averaged 43.8 with the bat. He did play brilliantly in the 2011 edition as a middle-order batsman and was the hero in the final. His experience in the middle-order would have certainly been handy. Not that Ajinkya Rahane didn’t perform as expected; in fact his knock against South Africa at Melbourne set the tone. However he was too flashy at times and unlucky on occasions. Gambhir had scored 393 runs at an average of 43.7 in 2011 edition, while in this edition Rahane managed 208 runs at an average of 34.7.

Rahane has looked really good during his stay at the crease and he certainly has a bright future. His agility in the field certainly added to India’s success.

When a batsman is scoring double hundreds one after the other, you would want to have him in the side. There’s no way Rohit Sharma would have made way for Sehwag, despite of the latter having a good Ranji season, where he averaged 51.6 with the bat.

Rohit’s overall numbers do read well. He scored 330 runs at an average of 47.1 and a strike rate of 91.7. Despite of him being lucky in the 90s, Rohit’s hundred against Bangladesh in the quarter-final was a treat to watch. However, He struggled against the bigger sides. Against Australia, South Africa, Pakistan and West Indies, Rohit scored a total of 56 runs. Sehwag averaged 47.5 in the 2011 edition, but his strike- rate was 122.6. Now with the new fielding rules, there’s every chance he could have been as impactful as Brendon McCullum in this tournament. Also, Rohit didn’t have a great time as a fielder. He dropped an easy catch and on occasions also misfielded.

Even on India’s tour in 2011-12, Rohit was played all the matches and seniors like Sachin Tendulkar, Gambhir and Sehwag were rotated to let Rohit get adjusted to the conditions. Rohit was a key player, but could he match Sehwag’s impact?

There was a question mark over Ravindra Jadeja’s fitness prior to the tri-series in Australia. Jadeja was the side’s spin bowling all-rounder in the tournament, a role that Yuvraj played to perfection in 2011. In terms of batting it’s not fair to compare the stats of both these players as Yuvraj mostly batted at No 5 and Jadeja at No 7. But even when Jadeja’s batting stats are compared to the number sevens of teams like Australia or New Zealand, they cut a sorry figure. Well, there’s no guarantee like claimed by the passionate fans that had Yuvraj played, India would have won, but yes, Jadeja could be identified as one area where India struggled. It was a problem that was hidden within India’s successes.

In hindsight, had Yuvraj been around, the Indian batting would have bore a stronger look and well with the ball, he might not have done any worse. That was surely a weak area which opponents looked to explore. 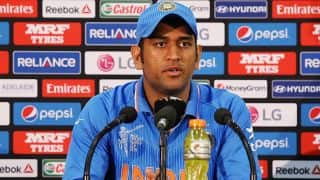 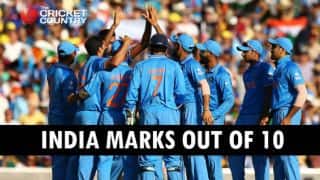