With MS Dhoni's retirement Wriddhiman Saha has been presented with an opportunity to be India's regular 'keeper.

There was a time when wicketkeepers in the Indian cricket team were strictly picked on their ‘keeping skills, regardless of whether they could hold a bat or not.  The likes of Naren Tamhane and Nana Joshi, who were exceptional with their glove-work but not capable of contributing with the bat, exemplify that period. Things started changing with the arrival of Budhi Kunderan and Farokh Engineer, who suggested that ‘keepers could bat too. Thereon, it became a norm of sorts that Indian keepers need to learn some batting as well. Syed Kirmani, Kiran More and Nayan Mongia followed the suit and proved to be decent batsmen. READ: Who will finally shine in MS Dhoni’s spot?

Then, with the rise of a few explosive and other proper wicketkeeper-batsmen in world cricket, the rules of the game completely changed. The emergence of Romesh Kaluwitharana, Adam Gilchrist and later on Kumar Sangakkara forced the other teams to look for similar players within their set-up, and after giving the likes of Ajay Ratra, Parthiv Patel and Dinesh Karthik a try, the Indian selectors picked a gem from the Indian wicketkeeping cupboard. MS Dhoni made an immediate impact and soon found himself playing all forms the game. His rise kept a generation of wicketkeepers cooling their heels at home, waiting for their turn.

Their wait just got longer as the man became the captain of the team. In the meanwhile, two men —Wriddhiman Saha and Naman Ojha—silently kept doing their job in the hope of light at the end of the tunnel. One fine day, Dhoni announced his retirement from the longest format and Saha got a chance to prove his worth. This didn’t come as a surprise, as Saha was undoubtedly the best ‘keeper in the country. Moreover, his First-Class batting average suggested he was good with the bat too. Saha had made his Test debut in the year 2010 as a specialist batsman, when VVS Laxman was injured and his replacement Rohit Sharma freakishly injured himself on the day of the match.

Though he was dismissed for a duck in the first innings, a resolute 36 in the second innings underlined his batting credentials. With Dhoni around, he had to wait for four more years to get a proper run in the side. But since then, he has scored 210 runs in five Tests at an average of 26.25 with two fifties. He has also affected 10 dismissals (7 catches and 3 stumpings.) These aren’t particularly bad numbers, considering he has just played seven Tests and he needs to be given a longer run. READ: MS Dhoni’s shadow hard to come out of: Wriddhiman Saha

Let’s have a look at what Naman Ojha has been doing all this while. He made his First-Class debut in 2000-01 season and since then has been a regular member of the less fancied Madhya Pradesh Ranji Trophy team. It was difficult for him as his performances weren’t followed with much enthusiasm and he had virtually no chance of ever making to the Indian team. Not a naturally gifted player, Ojha worked hard to breakthrough in the top-flight cricket and get noticed. The year 2009 was important for him, when he made a mark for himself in the Indian Premier League (IPL) playing for the Rajasthan Royals (RR). After two good seasons with the franchise, he made his India debut when he was picked in a second-string side.

However, it wasn’t a fairytale outing, as he failed and soon found himself out of favour for next four years. A determined Ojha fought his way back from the oblivion by scoring heavily in the next couple of domestic seasons. His scores of 219, 101 not out and 110 in Australia while playing for India enhanced his reputation. These were followed by scores of 217 and 40 in India, which further strengthened his credentials. Another good season followed, and he was on the plane to Sri Lanka to replace an injured Saha. He made an average Test debut (21 and 35) and threw his wicket in both the innings. READ: Naman Ojha – Quality wicketkeeper-batsman with limited opportunities

As expected, he was dropped from the team for home Tests against South Africa, as Saha returned to take his place. But a confident 52 for Board President’s XI against the South Africans in the two-day practice game recently has kept him into the reckoning. Ojha may not have the best of the techniques and might not be effective as a wicketkeeper too, but he has a resolute character. Saha may play for now, but he must remember Ojha ain’t far behind. He’ll continue to give Saha and others a run for their money. 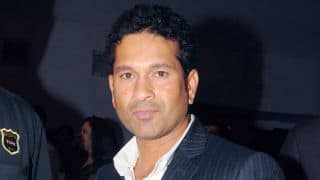