Wriddhiman Saha has no personal appeal compared to that of MS Dhoni's. Moreover, when he enters Eden Gardens, he doesn't get the adulation Sourav Ganguly did in his heydays. He wins moments that matter. He piles up runs that unknowingly change the course of the game.

106 for 6, read the scorecard. Rohit Sharma was in search of his lost paradise at his holy destination Eden Gardens, Kolkata. India needed a stroke of luck. More importantly, they needed someone who can play a characteristic innings with Rohit. They had gathered a lead of 218 runs. They were still behind in the race, as the battle was against New Zealand, a quality opposition who had drawn series 1-1 against Pakistan in UAE two years ago. Unlike others, the Kiwis have the knack of sensibly applying themselves in subcontinental conditions. They, in fact, quashed the likes of Yasir Shah on rank turners. FULL CRICKET SCORECARD: India vs New Zealand, 2nd Test at Eden Gardens, Kolkata

India knew they can’t take the New Zealanders for granted. They needed another 80 to post a safe target. Meanwhile, Rohit was looking in an ominous touch. He simply needed someone to second-fiddle him. Enter Wriddhiman Saha. He came to bat on Day Three, still unbeaten. He had laced up 54 not out in the first innings. On both occasions, he took the crease in the last session of the day, the time when India were pushed to further enigma. Let alone stroke of luck, the hosts needed stroke of inspiration.

The ball was only 30-over old. The pitch offered uneven bounce. The dark clouds were time and again looming over the iconic stadium. And Saha was like a fish in troubled waters.

“4 more wickets and the match is ours,” a Black Caps fan would have thought. They sniffed a victory. To add to the fire, India have a reputation of losing the plot. In no time do they their innings cascades down to an all-out. New Zealand had the same thing on their mind.

All this drama to prove Saha’s brilliance.

Mitchell Santner had just dismissed Ravichandran Ashwin. The spinners fired a similar delivery to get rid of Saha as well. However, Saha, with a straight bat, coolly defended it. ALSO READ: India trump Pakistan to become No. 1 team in Test cricket

In the first innings he had opened his account with a six over long-on. This time, with his agile footwork, he eased it away to vacant extra-cover region. Three consecutive maidens later, Saha broke the shackles. He lofted Santner’s tossed-up delivery over mid-off.

Rohit, at the other end, was batting at a strike-rate of 45, something we armchair cricket-fanatics are not used to. He was not brimming with confidence; his body language suggested so. But that’s how his appearance is. He wears a devil-may-care attitude. Pressure was being mounted on him by the New Zealanders though.

Usually, at this stage, an already-set batsman is supposed to anchor the innings. Saha, however, wasted no time. He took the charge instead, letting Rohit take his time to find his feet. He picked up another boundary, this time to fine-leg boundary.

That gave assurance to Rohit at the other hand. He pulled delightful six over square-leg against Trent Boult. Then he brought the crowd on its feet with a staggering cover-drive.

Saha’s belligerence at the start of his innings seemed to have infected Rohit. The Mumbaikar gradually started playing his natural stroke-play. Saha then realised he has to take the backseat, for Rohit was on song. He did exactly the same Robin Uthappa did during Rohit’s 264-run extravaganza.

It was Rohit who had taken the onus of scoring runs freely. As a result, Saha decided to keep his wicket intact. He dealt in ones and twos. The tactic seemed fair and square, as Bhuvneshwar Kumar and Mohammad Shami were yet to come. Yes, the same duo who has a second-highest partnership for the 10th wicket to its name. Also read: Wriddhiman Saha’s brilliance, Tom Latham’s fightback and other highlights

Rohit kept on piling runs. The next six boundaries came of Rohit’s bat. India were inching closer to the psychological, 300-run target.

Rohit perished, edging behind the wickets. He missed his century by 18. He had done his job. All the same, Ravindra Jadeja was sent back to the pavilion one six and three deliveries later.

It was time for Saha to get back to the driver’s seat. However, despite keeping Bhuvneshwar off strike (like he did in the first innings), he let the tail-ender (though Bhuvi is technically sound) take the bull by its horn. Bhuvneshwar replied with a six. India ended Day Three at 226 for 8.

Saha fired on all cylinders in the first session of the penultimate day. He reached his consecutive century and remained unbeaten, becoming only the fourth Indian wicketkeeper-batsman to do so in a match. The other three Indians include MS Dhoni, Dilawar Hussain and Farokh Engineer.

Let us now rewind to Saha’s genius in the first innings. India were in a similar situation, stuttering at 229 for 7. The 31-year-old added 41 with Jadeja and 35 with Mohammad Shami to take India out of the woods.

The idiom “punching well above one’s weight” can literally be applied to the frail man from Siliguri.

These unbeaten half-centuries don’t speak volumes compared to his peerless contribution. As a matter of fact, like his captain, he thrives under pressure as well. He does whatever that is thrown at him.

This was just about his class-apart batsmanship. He is a superlative wicketkeeper as well.

“Saha was brilliant. He s the best wicketkeeper in the country. He s doing a great job in Test cricket. That hundred in West Indies really improved his confidence. He understands how to bat with the tail now,” said Kohli at the presentation. Also read: Saha s 2 unbeaten 50s and 10 other statistical highlights from IND vs NZ, 2nd Test

In the first Test against West Indies, he had equalled Syed Kirmani and Dhoni’s record of most dismissal in an innings.

All the same, track at Eden Gardens produced uneven bounce, making things difficult for the wicketkeeper. At times the ball took off from the length area and ended up head high to Saha. Meanwhile, few deliveries stayed low, making Saha lean forward to pouch them. All in all, his wicketkeeping has been as swaggering as his batsmanship. He is quick and agile. In addition, rarely do we see him falter behind the wickets.

We often talk about Kohli’s mastery with the bat. We often write articles on Ashwin’s role in the team. We often shed light on Rohit’s inconsistency in the longest format.

Saha has no personal appeal compared to that of Dhoni’s. Moreover, when he enters Eden Gardens, he does not get the adulation Sourav Ganguly used to in his heydays.

Saha wins sessions though. He wins moments that matter. He piles up runs that unknowingly change the course of the game. To put things into perspective, he is a silent warrior.

All in all, Saha is India’s MVP in the longest format. 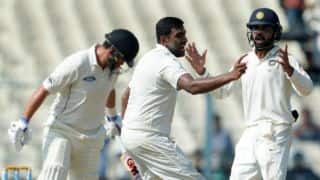 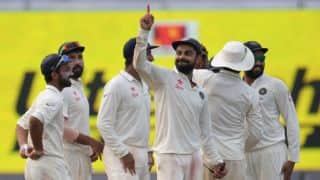