Wriddhiman Saha has not had enough opportunities for keeping the wickets due to MS Dhoni's presence.

Wriddhiman Saha, arguably the best wicketkeeper in the country, is all set to keep wickets for India in a Test after a gap of almost three years. MS Dhoni’s presence in the national team has always been a barrier for Saha. The first Test at Brisbane will be a huge challenge for him, but it can be the turning point of his career. Sandipan Banerjee has more.

How does one become a successful cricketer? The common answer would be: talent and hard work. But are those enough? How important is luck? Those who feel it isn’t should have a look at Wriddhiman Saha’s career.

‘Papali,’ as Saha is sometimes called, was born in a small town in West Bengal, Saktigarh, and brought up in Siliguri. He is both extremely talented and enormously hardworking. But since childhood he had to fight for his place in every team he has represented, whether it was his club, state, IPL or Indian team. Most of the time luck wasn’t there on his side, but the fighting spirit of this soft-spoken boy kept him going.

In 2005-06, after successful seasons at the club level, Saha was recognized by Bengal’s cricketing fraternity. But when Saha was in the scheme of the Bengal selectors, Deep Dasgupta was the first-choice wicketkeeper. So he had to wait until 2007 to make his debut of Bengal. Finally when he got the chance, Saha grabbed that opportunity with both hands and scored a debut hundred against Hyderabad.

After a couple of domestic seasons, the Bengal wicketkeeper emerged as the best in the country. But to earn a place in the national team, he had to cross a big huddle: MS Dhoni. By that time, Dhoni had become the nation’s heartthrob because of his heroics. Saha’s career has always been overshadowed by the great stature of Dhoni. But he still worked hard on his ‘keeping and batting to remain India’s second choice wicketkeeper for almost five years now.

Whenever Saha played cricket for the national team, especially Test cricket, it was always as a proxy for someone else. Thanks to Rohit Sharma’s injury in 2009, Saha finally made his Test debut against South Africa — as a batsman — and scored a fighting 36 against the likes of an in-form Dale Styen and Morne Morkel. He played his next Test in 2012, at Adelaide, when Dhoni was suspended. There too he impressed both behind the stumps and in front. Since 2009 he has been a regular member of the Indian squad in a foreign Test tour, but his role was only to keep wickets in the practice sessions and carry water during Test matches.

Cricketers like Stuart MacGill and Rangana Herath also went through the same phase when Shane Warne and Muttiah Muralitharan overshadowed their careers. But still, they managed to play a reasonable number of games to showcase their talents. But Saha has only played two Tests and nine One-day Internationals (ODIs) in five years since his debut, which is far too few for a player like him.

But as they say, everyone once gets his chance to prove his worth; the Brisbane Test could be that chance. Dhoni’s injury has given him a golden opportunity to represent India in white clothing once again. Though the final team isn’t declared yet, it is likely that Saha will be Virat Kohli’s first-choice wicketkeeper. This will be the third Test of his career and first after almost three years.

For any team, the first Test of a series is tough, especially keeping the conditions of a place like Brisbane in mind. In all likelihood, the Indian batsmen won’t find it easy to handle Mitchell Johnson and co. So if Saha can bat well and come up with a substantial score in the first Test, it won’t be easy for the team management to drop him for the next game. In that case, with Dhoni back in the team, Saha could even play as a batsman.

A good show with the bat at Brisbane can remove the proxy tag from the Siliguri boy, and he will have his own identity. Since his epic century in the Indian Premier League (IPL) 2014 final, Saha has made his name somewhat, but performances in Tests in foreign soil will undoubtedly be rated much higher.

Apart from his batting, it will be a Test of his ‘keeping abilities too in the seaming conditions of Gabba. Once again he has to prove that he is still India’s best wicketkeeper.

Saha started the tour well with a decent all-round performance in India’s first tour game. While ‘keeping, he was involved in six dismissals, and with bat he scored a gutsy 56 not out. He will get another practice game to acclimatise. Thereafter from December 4, it will be Saha’s big test, the Test, which will make or break his career. 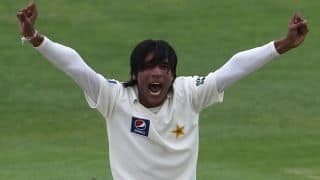