Pujara and Gandhi registered the 6th instance of two or more players scoring 50 and 100 in the same Irani Cup match.

The 56th edition of Irani Cup ended in the triumph of Cheteshwar Pujara-led Rest of India over the Ranji Trophy champions Gujarat. The match was played at Brabourne Stadium, Mumbai. Gujarat scored 358 in the first innings thanks to Chirag Gandhi s impressive 169. Siddarth Kaul took 5 for 86, while Pankaj Singh got 4 for 104. Gujarat impressed with ball as well as they bundled out RoI for 226 and gained a crucial lead of 132 thanks to Chintan Gaja s 4 for 60 and Hardik Patel s 3 for 79. In the second innings Gujarat made 246 and set RoI 379. This time Priyank Panchal scored 73, while Kaul took 4 for 64.

Things looked bleak for RoI at 63 for 4. However, captain Pujara dropped anchor at one end thereafter, while Wriddhiman Saha launched a counterattack. They batted till the end, ensuring a 6-wicket win. Saha, who came at the crease after Pujara, scored his maiden First-Class double-ton, while Pujara remained unbeaten on 116. The duo helped RoI win their 27th Irani Cup title. We present some interesting statistical highlights from the contest.

This is the 27th time RoI side claimed Irani Cup title.

Gujarat were also the 13th Ranji Trophy winner to play in Irani Cup and became the 9th team to lose against RoI.

Saha also scored the 1st Irani Trophy double-century by a wicketkeeper. The previous highest was 179 by Parthiv Patel in 2007-08. This was also Saha s 1st double-hundred in First-Class cricket.

Obviously, this was the first double ton scored by a No. 6 batsman. All six top positions in the history of the tournament now have at least one double-hundred.

Saha s average of 92.67 is the best by any wicketkeeper in Irani Cup (qualification: 2 innings). His 278 runs have come from 7 innings, but he had remained unbeaten 4 times. Before this innings, his average was 37.5. Vilas Bandiwandekar is closest to him with his average of 59 from 3 innings.

Pujara s unbeaten 116 was the 8th-highest score by a RoI skipper. These eight innings are also the only hundreds by RoI skippers in the tournament.

Pujara now averages 140 as captain in Irani Cup. This is the best among all captains (qualification: 2 innings). He has scored 280 runs as skipper in Irani Cup from 3 innings. Ravi Shastri (397 at 132.33) comes next.

Pujara also became the 1st ever RoI captain to score 50 and 100 in a single Irani Cup match. On the other hand, six opposition captains have done the same.

This was the 3rd fifty-plus score by Pujara as captain in Irani Cup joint second-most among captains with Wasim Jaffer, Mohinder Amarnath, Kapil, VVS Laxman and Shastri. The record of 4 is held by Ajit Wadekar. This was also Pujara s 3rd consecutive fifty-plus score in Irani Cup.

Pujara and Gandhi registered the 6th instance of two or more players scoring 50 and 100 in the same Irani Cup match.

This is also the 9th instance of multiple players crossing fifty twice in the same Irani Cup match.

Do note that there were two Irani Trophy matches in 2012-13. 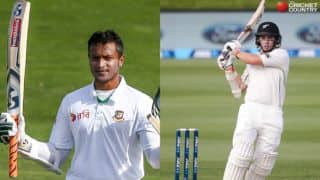