New Delhi: Former India batsman VVS Laxman feels that India should go with Rohit Sharma and Shubman Gill in the World Test Championship final (WTC) against New Zealand at Southampton. Laxman believes that India should stick with Rohit and Gill for this match even though Mayank Agarwal has done a very good job at the top of the order barring a couple of bad Test matches.

“I would back Shubman Gill to open with Rohit Sharma in this match, Mayank has done well, yet I will go with Gill and Rohit,” said Laxman in a virtual press conference organised by Star Sports.

Talking about the reason, he would have Rohit in the side, Laxman said, “Rohit Sharma is a match-winner, but letting go of balls outside the off-stump is something he should work on. Rohit should play Trent Boult with the full face of the bat.”

The former India middle-order batsman also reckoned that India would start as favourites to win the World Test Championship simply because of the kind of cricket they have played in the past few months. India won the series against Australia 2-1 in alien conditions and followed it up with a 3-1 win over England at home to book their spot in the WTC final.

“India would start favourites because of the cricket they have played in the past few months. The kind of things they have done in Australia would certainly help them,” added the 46-year-old.

Laxman also went on to speak in favour of the World Test championship and reckoned that this is the real test and it will help Test cricket to survive and grow at the same time.

“This is the real test. This makes you play out of your comfort zone. This is a great initiative. Test cricket will survive and would help cricket grow,” he further went on to add.

“I would go with five genuine batsmen, I have a lot of belief in Ashwin and Jadeja. Jadeja at No 7 would be good. A batsman in England needs to remember where their off-stump is. Allow the ball to come close to them and then counter the lateral movement,” said Laxman about the best team combination for India for the WTC final. 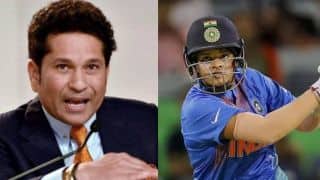 Shafali Verma Can Keep Audience Engaged While She is Batting: Sachin Tendulkar