Let s have a look at the top 10 T20I bowling performances in 2016 that helped bowling fraternity stay buoyant.

2016 saw some astonishing bowling performances. These include the less-famous ones, though. These are young and animated ones that changed the way one looks at bowlers in a batsman-dominated era. We saw an exponential swift in terms of the art of wicket-taking, as spinners ruled the charts when compared to fast bowlers. Most of these performances came during the Asia Cup T20 2016 and the ICC World T20 competition. The level of bowling has evolved year after year and has its outcome on all formats of the game. Some of the names mentioned below will surely take you by surprise but the thought of watching a bowler outwit batsmen is an enthralling charm. Let s have a look at the top 10 T20I bowling performances in 2016 that helped bowling fraternity stay buoyant:

Imad Wasim vs West Indies, 1st T20I: Imad Wasim after a remarkable series vs England stung West Indies in the right way to dismantle their side to just 115. Imad with his left-arm spin dismissed the likes of Evin Lewis, Andre Fletcher, Kieron Pollard, Carlos Brathwaite and Marlon Samuels to trigger a great Caribbean collapse. Imad used his drift to great results to beat the batsmen. His 5 for 14 in four overs meant Pakistan needed a paltry total to register a win in the first T20I. Imad also became the first Pakistani bowler to get a five-wicket haul T20Is.

Mustafizur Rahman vs New Zealand, ICC World T20: With good show in Asia Cup T20 2016 Mustafizur Rahman showed to the world that he is a name to stay for long. During World T20 tie against New Zealand, Rahman rattled the celebrated Kiwi batting line-up to shreds. Mustafizur’s victims included Henry Nicholls and Kane Williamson who were deceived by variation in pace.

He was on the mark most of the time with his yorkers, getting rid of Nathan McCullum and Mitchell Santner to complete a well-deserved five-for.

Sadly for the lanky pace man Bangladesh went on to lose the match by margin of 75 runs. Rahman’s figures stood at 5 for 22 in 4 overs.

James Faulkner vs Pakistan, ICC World T20: Australian batsmen Steven Smith and Shane Watson plundered runs against Pakistan to help their team to an imposing total of 193. Pakistan started well with Sharjeel Khan and Khalid Latif going all guns blazing. That s when James Faulkner came into play and helped his side to a memorable win.

Faulkner, a T20 specialist knocked-off Sharjeel, Latif in quick successions, and proceeded to clean up the tail in no time. In a span of 6 balls Faulkner picked up 4-wickets to complete a momentous five-for and knock Pakistan out of the tournament. Faulkner’s match figures were 5-wickets for 27 runs in four overs.

Mark Watt vs Netherland, one-off T20I: Somewhere in obscurity, Scotland was taking on Netherlands. Batting first Scotland posted a par score of 140 runs. Netherlands got off a steady start. With runs being of premium, Mark Watt took things in his own hand and disposed off any threat. The 19 year-old Watt turned things in his teams stride with his slow left-arm spin. Watt produced two successive double-wicket overs to leave Netherlands in a fix. He finished with figures of 5 for 27 to hand his side a 37-run win.

Mitchell Santner vs India, ICC World T20: India s disciplined show restricted New Zealand batsmen to a lowly score of 126 runs, which the likes of Rohit Sharma, Shikhar Dhawan, Virat Kolhi and co. could have easily achieved. Contrary to popular belief it was New Zealand s Mitchell Santner, who swirled a web around Indian batsmen and trapped them in their own game.

Santner with his expertise in turn and bounce bowled impeccable lines to down any Indian hopes. His 4 for 11 in 4 overs ensured New Zealand trounced over their most formidable opponent.

Shakib Al Hasan vs Oman, ICC World T20: Tamim Iqbal s crackling hundred-helped Bangladesh put up 180 runs on the board against Oman. Oman after some grittiness gave in to Shakib Al Hasan s wizardry as the target was reduced after consistent rain breaks.

Shakib s twin strikes in back-to-back overs completed formalities for his side and enabled Bangladesh to move into the main draw of the tournament.

Shakib recorded figures of 4 for 15.

Nabi single-handedly dismantled the Hong Kong middle-order to hand himself four wickets in as many overs. Nabi s show of strength meant Afghanistan came out the better side. Nabi recorded match figures of 4 for 17 in 4 overs.

Imran Tahir vs England, 1st T20I: England put into bat reeled in the effects of an in-form Imran Tahir. Tahir used his trickery to absolute best picking up a four-wicket haul for himself. He solitarily googly-ed batsmen to commit mistake, in particular Ben Stokes and Eoin Morgan. He produced match-winning figures of 4 for 21 in 4 overs; in a game ruled by bowlers

With a zippy action he generated pace that only added to his ability of bowling yorkers. Bumrah s show came in winning cause for his side. Bumrah in his 3.3 overs picked 3 wickets foir 17 runs. Later, India went on to whitewash Australia.

Chris Jordan vs Sri Lanka, ICC World T20: Chris Jordan with his variation in pace allowed England to win a crucial tie against Sri Lanka. Jordan initialed a collapse picking wickets of Thisera Perera and Dasun Shanaka to bring his side back into the game. A bit high on the economy side Jordan s 4 wickets was the difference, which helped England reach the semi-final stage. 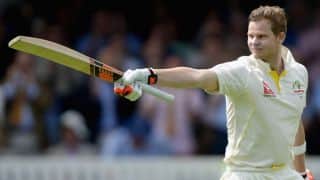