To don a selector s hat and pick the ODI team of the year was quite a task considering the playing combinations. Suvajit Mustafi justifies his ODI XI of 2017.

2017 was an important year for ODIs. The Champions Trophy was the centrepiece. Taking a cut-off of minimum 10 matches, England end the year with the best win percentage (78.95%). India won every bilateral series they played, a total of six. They played most number of ODIs (29) this year and enjoy a success ratio of 75 per cent. South Africa remain the No.1 ODI side with India threatening their supremacy.

Pakistan have scaled to new heights. Starting as the eighth-ranked side in the tournament, they beat the odds to emerge as the winners of Champions Trophy. Meanwhile, the world champions Australia had a win percentage of 38.46. They conceded the Chappell-Hadlee Trophy to New Zealand, failed to qualify for Champions Trophy playoffs and lost 1-4 in India. Quite an interesting year, isn t it?

To don a selector s hat and pick the ODI team of the year was quite a task considering the playing combinations. Suvajit Mustafi justifies his ODI XI of 2017.

The numbers tell you the story. He missed the England home series due to injury and India struggled at the top. Did he return as a better player? The numbers says so. Shikhar Dhawan and Rohit were united in the Champions Trophy and India enjoyed great results. Rohit s sheer impact steered many games in India s favour. The hallmark of Rohit s approach was his intent to finish games or bat throughout the innings.

He registered his third ODI double-hundred. It was the seventh instance the 200-run mark was breached in this format. Rohit has got there thrice while no other batsman has done it twice. Rohit ended 2017 as the second-highest run-getter in this format. Putting him on top was no-brainer.

(Trivia: Rohit struck 64 sixes in international cricket in 2017, the most by any batsman in a calendar year. 46 of those sixes came in ODIs.)

With that baby face it s tough to believe that he would dare to face the fiercest of bowlers, let alone flaying them all around. That s QDK. This was a tough pick. Seriously. David Warner almost edged past the South African. The Australian vice-captain slammed three hundreds in 13 matches, scoring 691 runs at 57.58 and strike rate of almost 103. De Kock is a wicketkeeper and that strengthened his case. He brings in that Gilchrist factor. Not only can he score fast, he can score big. His 168 not out against Bangladesh came in a 282-run unbeaten opening stand with Hashim Amla.

QDK will have a tough job keeping against a bunch of quality pacers and wily spinners. He has kept successfully against the likes of Rabadas and Tahirs, and therefore, he justifies his spot as the wicketkeeper too.

In a snippet the Kohli phenomenon continued. In 2016 he had averaged 92.37, so in contrast this was a quieter year but good enough to rule all charts. Kohli took over the captaincy mantle from MS Dhoni in limited-overs cricket. The big responsibility has often taken toll on the best, but Kohli is a different breed. The runs kept flowing.

He went past Ricky Ponting s tally of 30 ODI hundreds, and is now just behind Sachin Tendulkar. Under him, India are at No. 2 in the ICC ODI Rankings.

He also smacked a six at Pune that stunned the world.

Root had his best year in ODIs. He became the tenth English batsman to register 4,000 runs in this format. England fed on Root s form en route memorable shows. He also had his best year with the ball. His part-time off-spin fetched 5 wickets that included a 3-for. Root keeps the talented Babar Azam and Faf du Plessis out.

It s never easy making comebacks. Cricket awaited this moment. AB returned to international cricket and he continued from where he had left. If his 37 not out at Hamilton was an example of perfect finish, the 176 against Bangladesh was as brute as it can get.

AB misfired in the Champions Trophy and that hurt South Africa and the champion himself. He quit captaincy in August but continued excelling with the bat.

Stokes surpasses Hardik Pandya, Mohammad Nabi and Shakib Al Hasan with his far superior batting numbers. Stokes registered two hundreds this year, both in difficult circumstances and against quality bowling line-ups. His 79-ball 101 saw England clinch a 2-run win over South Africa at Southampton. The next one came at Birmingham, and it sealed Australia s fate in the Champions Trophy. This is Stokes best batting year in ODIs.

While Stokes continues to improve as a batsman, the same cannot be said about his bowling. Though he was expensive, he has picked wickets at crucial junctures.

Note: It s really a tough call to leave out MS Dhoni who continued being India s crisis man. He scored 788 runs at over 60 and was brilliant behind the stumps. The other option could have been Warner at the top with Rohit, and Dhoni at No.7 as the wicketkeeper-batsman. Stokes ordinary outing with the ball forces me to pick five specialist bowlers, some of who can bat. Before the Dhoni admirers question Stokes place, his batting numbers alone get him a spot and 14 wickets are just an addition.

Rashid Khan took the world by storm in 2017. He was rewarded heavily in the IPL 2017 with a fat contract with Sunrisers Hyderabad. The Afghan teenager dismantled Ireland at Greater Noida earlier this year and his appetite wasn t sufficed still. In one of the finest bowling displays in this format, Rashid destroyed the West Indies at Gros Islet to script a memorable Afghan win.

The numbers suggest he has been the best limited-overs bowler this year. He is more than a handy batsman down the order. At Harare in February, Rashid s 18-ball 32 won his side a game against Zimbabwe. Keeping the 56 at Greater Noida apart, Rashid had two more scores in excess of forty this year.

Wrist spinners are a fad in limited-overs cricket. What better than Kuldeep s Chinman bowling to compliment Rashid? This selection may come as a surprise. Kuldeep not only adds variety to the attack but also has slightly better numbers than Yuzvendra Chahal (21 wickets at 28.57 with an economy of 4.95) and Imran Tahir (27 wickets at 24.88 with an economy of 4.62). His batting is a passing mention.

Kuldeep made his international debut this year and has shone across formats. Against Australia at Kolkata, he bagged a hat-trick, and in doing so, he became the third Indian to the club after Chetan Sharma and Kapil Dev.

Woakes absence hurt England to some degree in the Champions Trophy. His bowling numbers are brilliant and he has done the job with the bat as well. During England s disappointing tour of India, Yuvraj Singh and Dhoni were feasting on the visitors attack at Cuttack. India put up 381.Woakes returned with figures of 4 for 60. At one stage he had reduced India to 25 for 3.

In the next game Woakes’ 19-ball 34 propelled England to 321 at Kolkata. He would later bowl a brilliant final over to the in-form Kedar Jadhav to hand England the consolation win. The venue soon became his home ground. He was later picked by Kolkata Knight Riders in the IPL.

Woakes four-for against South Africa at Leeds helped England to another win. The English seamer earns his spot.

Finally, an Australian makes it to this side. His inclusion ahead of Jasprit Bumrah, Josh Hazlewood and Trent Boult is debatable. Starc, being a southpaw, brings in varietyand can clock serious pace. To Bumrah s discredit he had a poor series against England and during Champions Trophy. Boult also enjoyed most of his success against the listless West Indian side.

Hazlewood has taken a wicket more in as many games, but Starc has been tad more lethal. Woakes similarity to Hazlewood s bowling style swings the case in Starc s favour, but this could have gone any way.

Pakistan is a cricket mine that produces fast bowlers like no other zone. Hasan s rise is a further testimony to this belief. His journey to the No.1 spot in bowling rankings got Pakistan their first Champions Trophy. He followed his Man of the Series feat (13 wickets) in Champions Trophy by avenging Sri Lanka s Test triumph over Pakistan. In the ODI series that followed, he annihilated Sri Lanka by claiming 14 wickets from 5 matches as the visitors slumped to 12 consecutive one-day defeats.

He got 3 five-wicket hauls this year: the first came against Australia at Sydney, then against West Indies at Providence, followed by his career-best figures of 5 for 34 against Sri Lanka at Abu Dhabi.

Hasan s strength lies in his variations and smart altering of lengths.

Faf misses out despite amassing 905 runs at 60.33, but you need someone in the unit who can pouch those unthinkable and produce run outs from nowhere. 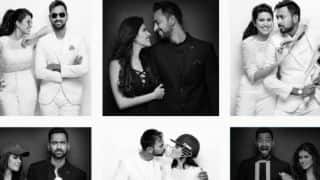