The year 2018 was stocked with several significant moments in the world of cricket. Let s take a look

This moment will be etched in every Indian fan s heart forever and specially Dinesh Karthik, whose nerves of steel led India to a thrilling four-wicket win over Bangladesh in the final of the Nidahas Trophy in Colombo. When the senior Tamil Nadu glovesman came to the crease, India required 34 off 12 and Mustafizur Rahman had just completed bowling a wicket-maiden over with Bangladesh firmly in control. However, Karthik had other plans. He tonked the first three balls he faced for a six, four and a six respectively off Rubel Hossain. Then came the last delivery which Karthik clobbered for a six over cover to ensure India kept their T20I record against Bangladesh intact.

It was batting of the highest order! With wickets falling around him in a heap, Cheteshwar Pujara waged a lone battle to bring up his 16th Test hundred in the opening Test against Australia at Adelaide. Pujara walked in after KL Rahul s reckless shot cost him his wicket in the second over in India s first innings after Virat Kohli called it right at the toss. Pujara saw Murali Vijay, Kohli and Ajinkya Rahane perish to inexplicable shot selection, but that did not deter his confidence as he absorbed the pressure nicely, took time to settle down and slammed a scintillating 123 an innings that was laced with seven boundaries and two hits over the fence. His knock was brought to an abrupt end after he was run out by Pat Cummins probably that was the only way the Aussies could dismiss the rock behind India s innings. Pujara s 123 steered India to 250 in the first dig. He added another crucial 71 runs in the second essay to notch 194 runs in the opening Test a match-winning knock as India won the Test by 31 runs. Pujara was declared the Man of the Match for his fine innings.

The Indian women s side may have suffered heartbreak when they crashed out in the knockout stages of the ICC Women s World T20 after losing the semi-final against England, but for Harmanpreet Kaur, it will be a memorable outing. The skipper became the first Indian woman to score a Twenty20 International century when she smashed 103 off just 53 deliveries in India s opening match against New Zealand at Guyana. The 29-year-old reached the three-figure mark in 49 balls punishing the Kiwi bowlers with eight sixes and four boundaries. Kaur had also scored a scintillating 171 against Australia in the Women s World Cup in 2017. Wonder which knock she would rate better?

A boundary of the last ball from Ambati Rayudu Chennai Super Kings (CSK) highest run-scorer in the Indian Premier League (IPL) 2018 final against Sunrisers Hyderabad, saw the yellow brigade mark a successful return to the IPL after a two-year hiatus to clinch their third IPL crown. In a lopsided summit clash, it was veteran Australian allrounder Shane Watson, who blasted his second century of the season and finished with the highest ever score in an IPL final, as CSK thrashed SRH by eight wickets. Watson, who was unbeaten on 117, carted 11 boundaries and eight sixes in his 57-ball belligerent knock to pocket the Man of the Match award. The victory also meant that Rayudu and Harbhajan Singh, became two of only three players to win the IPL as many as four times. The duo were part of Mumbai Indians, who have won the title thrice and were released ahead of the season.

On a wearing Dubai pitch and against a world-class bowling attack, opener Usman Khawaja proved critics wrong and smashed a brilliant century against Pakistan in the first Test in the UAE. Khawaja, who made 85 off 175 in the first dig, scored 141 off a whopping 302 deliveries that s 50 overs to steer Australia to a famous draw. His innings was underpinned as the most heroic in Australian Test history. He smashed 11 boundaries during his eight-hour, 44-minute ordeal at the crease which was the second longest by anyone in the fourth innings of a Test after Michael Atherton s marathon in Johannesburg in 1995. Khawaja also became the first Pakistan-born player to score a Test century against Pakistan. Sweet!

Veteran pacer Dale Steyn became South Africa’s leading Test wicket-taker after he broke the record he shared with Shaun Pollock when Pakistan s Fakhar Zaman became his 422nd victim on the first day of the first Test at SuperSport Park in Centurion. Steyn’s haul came in 89 matches, at an average of 22.60, while Pollock averaged 23.11 across 108 matches. Steyn had taken his took his 400th Test wicket in his 80th Test in July 2015 – the second-fastest in the world to reach the milestone – and it seemed Pollock s record was about to fall, but four serious injuries delayed what had seemed imminently inevitable. Steyn is now 11th on his own on the all-time world list, needing to match New Zealand s Richard Hadlee on 431 to claim a place in the top ten.

Pakistan leg-spinner Yasir Shah created history to become the fastest to reach 200 Test wickets on the fourth day of the third Test against New Zealand in Abu Dhabi. Shah, who picked up his fifth wicket in the match after dismissing Will Somerville, broke the pre-World War II record held by Australian Clarrie Grimmett in 1936. Shah achieved the feat in just 33 Tests as opposed to Grimmett, who arrived at the landmark in his 36th Test. India s premier offspinner Ravichandran Ashwin had fallen short by one Test to reach the milestone in his 37th Test. Former Australia fast bowler Dennis Lillee and Pakistan pace great Waqar Younis, who completed 200 wickets in 38 Tests, and South Africa s Dale Steyn, who reached the figure in his 39th Test, occupy the top five positions.

What a way for England to end 2018 than claim a historic Test series sweep in Sri Lanka after the tourists sealed the third and final Test in Colombo by 42 runs. England registered their first overseas whitewash in 55 years. What made the series more special was England s pool of talent which was highlighted with Jack Leach, who claimed five wickets in the final Test, coming in as the third spinner along with Adil Rashid and Moeen Ali. In fact, 100 wickets fell to the spinners in the series, the most in a three-match series. The introduction of Ben Foakes, who scored a century on debut in Galle, at the expense of Jonny Bairstow, had the moment sweeter. Foakes was named Man of the Series for leading the batting chart with 277 runs including a ton and a half-century. It was the third time Sri Lanka have been whitewashed at home after India last year and Australia in 2004.

Debutant Will Somerville pocketed three key wickets to lead New Zealand to their first away series win over Pakistan in 49 years with a crushing 123-run win in the third and final Test at Abu Dhabi. Somerville was assisted by spinner Ajaz Patel’s 3-42 as Pakistan were bowled out for 156 in their second dig after being set a daunting 280-run target. Pakistan, who lost the first Test by a narrow four-run margin, bounced back with an innings and 16-run win in the second test in Dubai. However, in the decider, the Black Caps bowlers were relentless and hunted in packs to give their side their first away series win against Pakistan since 1969.

India asserted their dominance in the U-19 category after clinching U-19 World Cup for a record fourth time after the Prithvi Shaw-led side thrashed Australia in the final by eight wickets at Mount Maunganui. India were clinical in their performance with the bowlers dismissing Australia for 216 from 183 for four at one stage. Manjot Kalra s unbeaten 101 led the run-chase as India chased down their target with 67 balls to spare to give Rahul Dravid the biggest success of his coaching career. With a fourth title, India surpassed Australia in the race of most U-19 World Cup titles. 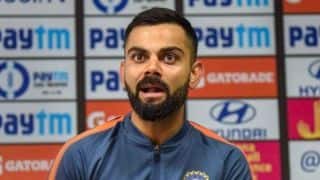