It’s time to have a look back at the top match-defining bowling performances in cricket’s shortest format during 2018.

West Indies had to wait for long to win their first trophy on an almost three-month long tour of the subcontinent. And it came in an eventful fashion in the final match of their tour third T20I against Bangladesh with the series locked at 1-1. Chasing 191, Bangladesh began in blazing fashion before a controversial no ball call resulted in a 10-minute halt. Once the chase resumed, Windies bowlers were fired by as the decision went against them. Paceman Keemo Paul razed through their line-up to finish with career-best figures of 5/15 from four overs as Bangladesh folded for 140. Paul’s victims included opener Liton Das who struck 25-ball 43, Mushfiqur Rahim and Mahmudullah that prevented the hosts from recovering.

In a big chase of 204 against India in the first T20I of a three-match series, Reeza Hendricks had kept South Africa in the hunt with a quickfire fifty. Off the final delivery of the 15th over, legspinner Yuzvendra Chahal had given India a sigh of relief when he dismissed Farhaan Behardian to break the 81-run stand. Bhuvneshwar then put the game to bed in the 18th over, his fourth. He first dismissed Hendricks on 70 to start the over, landing a big blow. Then off successive deliveries he removed Heinrich Klaasen (16 off 8) and big-hitting Chris Morris (0) to all but seal the fate. He finished with career-best figures of 5/24 as South Africa managed 175/9 in 20 overs. India won by 28 runs to take 1-0 lead.

Captain Shakib’s all-round brilliance helped Bangladesh draw level in the three-match series. First his 26-ball 42 not out pushed them to 211/4 and then his five-wicket haul sealed a 36-run win. After the early dismissal of opener Evin Lewis (1), the middle order kept Windies’ hopes alive. Shakib razed through the middle-order that included the scalps of Nicholas Pooran (14 off 6), Shimron Hetmyer (19 off 17), Dwayne Bravo (2), captain Carlos Brathwaite (7) and Keemo Paul (29 off16). Windies were bowled out for 175 in 19.2 overs as Shakib finished with career-best bowling figures of 5/20.

Stanlake bowled unchanged to complete his quota of four overs in a devastating spell that crushed Pakistan’s top order. He combined with his captain Aaron Finch to pick all but one of his four wickets in successive overs. In the first over, he had Mohammed Hafeez out for a three-ball duck, Hussain Talat then walked back, both caught by Finch at slip. Wicketkeeper Alex Carey then joined in the revelry accepting a simple catch in the fifth over before Finch accepted his third catch of the innings to get rid of his counterpart Sarfraz Ahmed that gave Stanlake his fourth wicket in as many overs. Pakistan found no answers to his pace and bounce and were left tottering at 24/4 in 6.2 overs. They eventually folded for 116 and Australia overhauled it inside 11 overs.

England were flying high after being asked to bat first in the series opener in Manchester. Jason Roy had given them a blazing start, hitting 30 off 20 and Jos Buttler had scored a quickfire fifty when Kuldeep entered the picture, turning the game on its head. His first over went quietly. Then Buttler creamed Hardik Pandya for 18 runs in an over. At 95/1 in 11 overs, England had been set a terrific platform to explode. Kuldeep landed multiple blows without giving them a chance to make a sense of the situation to blow their hopes away. He first ended Alex Hales struggle by having him bowled for 8. His third over proved decisive as in it, he picked up three wickets including two off successive deliveries. Captain Morgan was his first victim of the over, holing out to Virat Kohli in the deep and the Jonny Bairstow and Joe Root were both stumped for a duck each. Kuldeep was then held back for the death overs and he didn’t disappoint, collecting the prized scalp of Buttler (60) to complete his five-wicket haul. England posted 159/8 and India went on to win the match by eight wickets.

In his first two overs, Rashid failed to get a wicket but had maintained a tight leash over Bangladesh batsmen, allowing just nine runs in them. His wait ended in the third over when Bangladesh suffered a collapse to be reduced to 103/7. It was the 16th over of the innings and Rashid had built enough pressure to force Shakib into taking the aerial route and end up holing out for 3. He then outfoxed the well-set Tamim Iqbal with a googly to have him bowled for 43 and was on a hat-trick when he pinned Mosaddek Hossain in front for a first-ball duck. He nearly got that, but the catch fell wide of the short leg fielder. Rashid picked up his fourth wicket in his final over as Soumya Sarkar was caught at deep mid-wicket for 3. Bangladesh won the second T20I to clinch the series 2-0.

Denly celebrated his first international match in almost nine years with a career-best bowling figures of 4/19 that earned him the player of the match award, capping off a memorable year of professional cricket for the allrounder. His early punches left major dent in Sri Lankan hopes when he removed their openers Niroshan Dickwella (3) and Kusal Mendis in his first two overs. Together with fellow leggie, Denly sent half the Sri Lankan side back in the pavilion inside 11 overs. Captain Thisara Perera was the saving grace for the hosts as he struck a half-century. And by the time, Denly came to bowl the 20th over of the innings, Sri Lankan hopes depended on surreal turn of events as they needed 39 off 6 despite Perera’s desperate efforts to keep his team in the hunt. Instead, Denly took two more wickets with the hosts being bowled out for 157.

Stand-in captain Southee’s opening spell was vital in ensuring Pakistan folded for below par total of 105 in 19.4 overs in the first T20I against New Zealand in Wellington. He came in to bowl the second over after New Zealand opted to field. He struck with his third delivery when he had opener Fakhar Zaman hole out to Anaru Kitchen for 3. Mohammad Nawaz became his second victim in as many over as he finished his first spell that read 2-0-8-2. He returned in the 14th over and by then Pakistan were reeling at 52/6. He made it worse by picking up his third scalp, allowing just a single in it. He then finished his quota in the 18th over and though this time he couldn’t get a wicket, he didn’t leak runs either, finishing with 3/13 from four overs.

After posting a low 109/8, Windies bowlers made a match out of the contest led by their captain Brathwaite and debutant Oshane Thomas. India openers Shikhar Dhawan and Rohit Sharma were sent packing inside three overs by Thomas. Brathwaite then took over, adding the scalp of big-hitting Rishabh Pant (1) and KL Rahul (16) to his kitty. India were reduced to 45/4 in 7.3 overs. Brathwaite’s first three overs saw him taking two wickets for just four runs. He returned to bowl the 14th over in which Manish Pandey managed to score a four off him to take seven runs from the over. India would end up as the winners but first Thomas and then Brathwaite ensured the current WT20 champions didn’t go down without a fight.

Australia had started their chase of 151 scoring 54 runs the same as Pakistan in the Powerplay overs. The only difference was that they had lost two wickets. However, the chase was still alive with the power-hitters of the likes of Chris Lynn, Glenn Maxwell and D’Arcy Short in Australian line-up. Shadab then applied the squeeze in the middle overs as he landed three big blows to push Australia off the track. He struck with is first delivery when Lynn holed out for 15. He next snapped Maxwell for 4. He a third wicket in his third over with Shoaib Malik taking a brilliant catch to end Mitchell Marsh’s innings. He finished his spell with a tight over, giving away just five runs. Australia were eventually bowled out for 117. 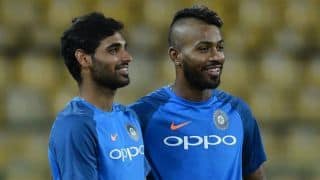