South Africa witnessed a decent year in terms of results but suffered two big series defeats that must have served as a massive wake-up call.

South Africa welcomed 2018 with a high-profile Test series against the top-ranked Indian team that had walloped every other team at home. The series was dominated by fast bowlers and South Africa clinched the series with victories in Cape Town and Centurion before India pulled one back in Johannesburg. Boxing Day Test was their final act of a year where they beat Pakistan inside three days.

Test cricket turned out to be South Africa’s best format during the year where barring one series they bossed over their opponents. The high of beating world’s best Test team soon took the backseat when they were crushed 1-5 in a six-ODI series by India. That was to be their only ODI series defeat in 2018 as they beat Sri Lanka, Zimbabwe and Australia in three straight tours. Similarly, they lost a home T20I series to India before winning in Sri Lanka, Zimbabwe and Australia.

In between they hosted Australia for a four-Test series which they comprehensively won 3-1. But the Cape Town ball-tampering scandal stole the limelight from their display. One blemish from an otherwise satisfactory year was the drubbing they received from Sri Lanka but more on that later.

South Africa continued to be a force in Test cricket at home. They hosted India and Australia in the early part of the year. They won both the series but beating Virat Kohli’s side must have given Faf du Plessis more satisfaction than Australia considering how close the contests turned out to be. India’s young pace battery proved its worth during the tour and set the stage for victories in the first two Tests. The hosts had to dig deep to stop the tourists from creating history. The manner in which India won the final Test was proof enough how far South Africa were pushed.

Definitely a 2-0 Test series loss to Sri Lanka in July. Neither of the two matches lasted the entirety of the five days. Their struggle against spin bowling came to the fore the home spinners claimed 37 of their 40 wickets to fall. The first Test was a no contest with South Africa skittled for 73 in the second innings as Sri Lanka won in three days in Galle. There was a slight improvement in Colombo where the Test lasted a little over three days but it wasn’t enough to prevent Sri Lanka win by 199 runs. The 1-5 thrashing to India in a five-ODI series at home would also have pinched them.

Kagiso Rabada finished as the top-ranked bowler in Test cricket with the most wickets during the year in the format. He finished with 52 wickets the most by ay bowler- in 10 Tests at an average of 20.07. The 23-year-old solidified his reputation as one of the premier pacers of the current era with several match-winning performances including a memorable match haul of 11/150 against Australia at Port Elizabeth that won him the player-of-the-match award as well. He was also South Africa’s second highest wicket-taker in ODIs with 23 scalps in 14 matches. He played just two T20Is from which he collected two wickets.

Hashim Amla endured a terrible year with the bat by his own standards. While he struck five fifties, he failed to score a century in 20 innings. He managed 510 runs at 26.84. His start to the year was positive three half-centuries against India during a three-Test series. Then came Australia against whom in eight innings, he crossed 50 just once. The tour of Sri Lanka was a nightmare both for Amla and his team. His scores across four innings read 15,0,19 and 6. He did finish the year on a solid note an unbeaten 63 against Pakistan in a six-wicket win. The story wasn’t different in ODIs either where he scored 315 runs in 11 innings at 28.63 with two half-centuries. In his only T20I, he registered a four-ball duck.

South Africa gave debut to 12 cricketers across formats with Lungi Ngidi the standout performer. He made his Test debut against India in January and ended up taking seven wickets in it including a six-wicket haul in the second innings. An injury ended his year early but by then he had taken 15 wickets in four Tests. He made his ODI debut in February and in 13 matches, has taken 26 wickets. He also made a solid impression in the shortest format too claiming 11 wickets in 7 outings at 11.63. 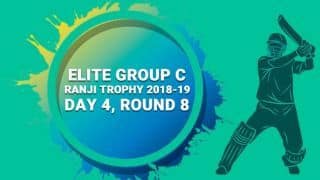