A look back at the ten most memorable Test matches of 2014.

Test cricket thrived in the year 2014-15 with as many as three teams defying odds by winning series overseas. Ankur Dhawan excavates the calendar year and picks ten Tests that will be etched in the memory for years to come.

South Africa vs Australia at Cape Town: Michael Clarke battled a broken shoulder and a hostile protean attack that relentlessly attacked the wound from around the wicket, to guide Australia to a mammoth 494 with a contribution of an unbeaten 161 in the deciding Test at Newlands, Cape Town. David Warner completed his evolution as a Test Batsman by playing two career-defining innings that knocked the wind out of the South African attack. The bowlers performed the last rites by dismissing the formidable South African batting line up for 287 and 265, as Australia registered a colossal victory by 245 runs.

India vs New Zealand at Wellington: India travelled to New Zealand under the quotidian burden of expectation. After a reality check at Auckland, the Indians discovered their mojo at Wellington. The tourists were coasting to an imminent victory before Brendon McCullum and BJ Watling produced a partnership which will be talked about in the same breath as the one between VVS Laxman and Rahul Dravid at Eden Gardens, Kolkata. With half the team back in the hut and the hosts still 152 runs adrift in the second innings, the duo stitched together the most memorable partnership of the year that saved the Kiwis from what would have been a massive loss at home. McCullum and Watling added 352 runs together to take New Zealand to safety and rob India of a much-coveted overseas Test win. New Zealand won the two match series one-nil.

Sri Lanka vs England at Headingly: Sri Lanka escaped defeat by the skin of their teeth in the first Test at Lord’s. The second Test at Headingly followed a similar pattern as the one at Lord’s, barring the fact that the roles had mysteriously switched. Sri Lanka assumed a position of ascendency and unlike England drove home the advantage. Angelo Mathews came into his own as a Test Batsman as he and Rangana Herath took the tiring English attack to the sword, adding 149 runs for the eighth wicket. Mathews registered his highest score of 160 before the bowlers completed a hard-fought win which was achieved with a solitary delivery left in the game.

Pakistan vs Sri Lanka at Sharjah: The year 2014 kicked off with an enthralling contest between Pakistan and Sri Lanka. After a battle of musical chairs which saw both teams on top at different stages of the game, Pakistan pulled off an unlikely victory in the final remnants of the Test by chasing down 302 in a mere 57.3 overs. Azhar Ali scored an uncharacteristically fluent century with a strike rate of over 75 which set the foundation for the win.

India vs England at Lord’s: India were greeted by archetypal English conditions at Lord’s in the second Test. To compound matters MS Dhoni lost the toss on a green top designed to flatten India. India battled their way to a competitive 296 on the back of a free-flowing hundred by Ajinkya Rahane, who was beginning to showcase his mettle. Like at Mumbai in 2012 when India had produced a dustbowl the move backfired on the English as Bhuvneshwar Kumar and Ishant Sharma wreaked havoc. Bhuvneshwar s consistency paid rich dividends in the first innings ensuring England didn t overtake India by a significant margin, before Ishant decimated them in the second innings, claiming career best figures of seven for 74. India had finally got the monkey of their back, winning an overseas Test after a whopping gap of 12 Test matches.

Sri Lanka vs South Africa at Colombo: South Africa enhanced their reputation as a touring side by eclipsing the hosts by 153 runs at the Sinhalese Sports Club (SSC), which has been Sri Lanka s fortress over the years. Dale Steyn was at his quintessential best as he ran through the Sri Lankan batting with figures of nine for 99 that scripted a famous win for the Proteas. South Africa held on to a draw in the second Test to reclaim the No. 1 Test ranking.

Pakistan vs New Zealand at Sharjah: The Sharjah Test was played with the unfortunate death of Phillip Hughes still looming in the background. The match was extended by a day in order to allow players from both sides to grieve the loss of one of their cricketing kin. When Play resumed on Day Two, New Zealand made early inroads to restrict Pakistan to 350. Carnage followed, as Brendon McCullum tore apart the Pakistan attack, hammering his third 200-plus score of the year in the process. McCullum s supercalifragilisticexpialidocious 202 included 11 hits into the stands. New Zealand were all over Pakistan like a bad rash thereafter, demolishing the hosts by an innings and 80 runs to win the Test and level the series.

Pakistan vs Australia at Dubai: Pakistan were under immense pressure subsequent to the three-nil whitewash in the One-Day Internationals (ODIs). To aggravate matters, they were missing the services of their strike bowler Saeed Ajmal. The veterans Younis Khan and Zulfiqar Babar came to their rescue as the hosts humbled the No. 2 ranked team in the world to redeem themselves. Younis Khan, who had returned to the side under a cloud of pessimism, scored a superlative ton in the first innings and backed it up with another one the second time around to close the door on the visitors, also ensuring the selectors and detractors stood corrected. Pakistan beat Australia by 221 runs to complete a memorable victory.

India vs Australia at Adelaide: India were written off after the England debacle. Fake obituaries were written as the Indians landed on Australian shores. The lead-up to the series was then marred by the sad demise of Phillip Hughes which postponed the commencement of the tour. When cricket finally resumed, it was a quintessential India versus Australia contest. Virat Kohli led the way in his first Test as captain to take India to the brink of a spectacular win. India missed their fourth innings Target of 364 by a whisker as the tail capitulated after the dismissal of Kohli for 141, which was his second ton for the Test. Nathan Lyon bowled Australia to a tense win with a 12-wicket match haul as the hosts won by 48 runs.

India vs Australia at Melbourne: Intrinsically the Test wasn t special. Batsmen from both sides feasted on the first four days of the Test. A late declaration from Australia on Day Five and the fall of three early wickets in the Indian innings set the cat among the pigeons as India had to grind out a draw. Amidst the chaos stood the Indian captain MS Dhoni, who played out the last 15 overs in the company of Ravichandran Ashwin to secure a draw. The Test though, will be remembered less for the cricket, and more for the bombshell dropped by the Indian captain at the conclusion of the match, as Dhoni abruptly announced his retirement from Test cricket. 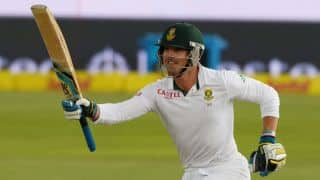