Here are the top 10 most memorable ODIs of this year.

The year 2014 saw some absolutely thrilling One-Day Internationals (ODIs) which were decided in the last remnants of the match. Shiamak Unwalla lists out the 10 most memorable matches of the year in chronological order.

Australia continued to dominate England even in the ODI series after having blown them apart in the Ashes. Having won the first ODI at the MCG, Australia had their tails up at The Gabba. England won the toss and batted first. Alastair Cook and Ian Bell added 57 for the opening wicket, before suffering a minor collapse that saw them flounder at 78 for three. Bell was out for 66, but Eoin Morgan (106) and Jos Buttler (49) propelled England to 300.

England struck at regular intervals to maintain the upper hand for much of the second innings. Shaun Marsh (55) and Glenn Maxwell (54) were the only ones to show some fight, but even they were unable to kick on. At 206 for seven, it seemed all was lost for Australia. But they still had James Faulkner in the middle, fresh off his 73-ball 116 against India mere months ago. The right-hander added 29 with Nathan Coulter-Nile and an unbeaten 57 with No. 11 Clint McKay en route to his 69 off 47 balls as Australia triumphed by a solitary wicket in the final over.

New Zealand won the first two ODIs of the series despite Virat Kohli’s heroics with the bat. India won the toss and decided to chase. Jesse Ryder blasted away to 20 off 12 balls, but was out soon after. Martin Guptill (111) and Kane Williamson (65) then piled on 153 runs for the second wicket to dominate the Indian bowling. Luke Ronchi (38) and Tim Southee (27) provided a late flourish as New Zealand were bowled out for 314 off the last ball of the innings.

In reply, Rohit Sharma and Shikhar Dhawan got India off to a good start, putting on 64 for the opening wicket. India then suffered a dramatic collapse, losing four wickets for just 15 runs. At 79 for four, India dearly needed a partnership, which was provided by Suresh Raina (31) and MS Dhoni (50). The real flourish, though, came from an unexpected source. Ravichandran Ashwin, batting ahead of Ravindra Jadeja, smashed his way to 65 off 46 to ignite hopes of an Indian victory. He and Jadeja were involved in an 85-run partnership for the seventh wicket. After Ashwin’s dismissal, Jadeja took over, and slammed an unbeaten 66 off 45 balls to take the game into the final over. With 18 needed off the final six, Jadeja hit Corey Anderson for two fours and a six to bring the equation down to two runs needed off the last ball. Jadeja could only get one, as the match ended in a tie.

Pakistan won the toss against India in the sixth match of the Asia Cup and decided to field first. Rohit Sharma (56), Ambati Rayudu (58), and Ravindra Jadeja (52*) scored half-centuries, but India struggled to score quickly. They ended at a mediocre 245 for eight, with Saeed Ajmal grabbing three for 40.

Sharjeel Khan and Ahmed Shehzad then got Pakistan off to a flying start, scoring 71 for the opening wicket. Mohammad Hafeez scored a sedate 117-ball 75 to hold the innings together, but timely wickets kept India in the hunt. At 203 for six in the 45th over, the match seemed to be veering toward an Indian win. But Shahid Afridi had other plans, smashing an unbeaten 34 off 18 balls with two fours and three sixes. Pakistan scampered through by just one wicket in the final over of the match.

Bangladesh must have been delighted on winning the toss in the eighth match of the Asia Cup 2014. They batted first, and put in one of the best batting performances ever seen by a Bangladeshi team. Anamul Haque scored 100, Imrul Kayes made 59, Mominul Haque hit 51, Mushfiqur Rahim thundered away to an unbeaten 51 from 33 balls, and Shakib Al Hasan hit a whirlwind 16-ball 44 not out as Bangladesh reached a heady 326 for three. Abdur Rehman emerged with shocking figures of none for eight off zero balls!

Ahmed Shehzad (103) and Mohammad Hafeez (52) got Pakistan off to a flier, putting on 97 in quick time. Fawad Alam then scored a breezy 74 off 70 balls, but the finishing flourish was added by a surprisingly resolute Shahid Afridi. Coming in at No. 7, Afridi hammered 59 off 25 deliveries as Pakistan managed to win with just one ball to spare.

England won the first ODI of the series, Sri Lanka won the second one, England won the third, and both teams came to Lord’swith enough incentive. Tillakaratne Dilshan (71) and Kumar Sangakkara (112) dominated the English bowling with a 172-run stand after Alastair Cook won the toss and decided to field first. England then fought back well, restricting Sri Lanka to 300 for nine, with Harry Gurney taking four for 55.

England started poorly, with Alastair Cook and Ian Bell falling cheaply. Thereafter, Gary Ballance (42), Joe Root (43), and Ravi Bopara (51) chipped in with valuable innings, but none of them were able to go on. Jos Buttler, batting at No. 7, then proceeded to play the innings of his life. Buttler was involved in a 133-run stand with Bopara, but continued to plunder runs off the bowling even after the latter’s dismissal. He was out in the final over of the match for a game-changing 121 off 74 balls, the fastest ODI ton by an Englishman. In the end, England fell seven runs short, but Buttler took the game to the final over.

Pakistan won the toss and elected to field first. They would have fancied their decision, having reduced Sri Lanka to 75 for four before Mahela Jayawardene and Angelo Mathews added 116. Mathews remained unbeaten on 89 off 85 balls, while Ashan Priyanjan hammered 39 off just 15 balls as Sri Lanka piled on 275 for seven in just 45 overs.

Ahmed Shehzad scored a useful 49 at the top, but Pakistan collapsed to 106 for five in the 23rd over in response. From that seemingly hopeless position, Sohaib Maqsood and Fawad Alam combined in a match-winning 147-run stand that took Pakistan to within 20 runs of a win. Shahid Afridi then played a little cameo as Pakistan won the rain-truncated match by four wickets off the penultimate ball of the match.

In what was arguably the biggest upset of the year, a spirited Zimbabwe overcame Australia in the fourth match of the Zimbabwe Triangular Series also involving South Africa. Australia batted first after Michael Clarke won the toss, but soon found themselves in trouble at 57 for four. Clarke and Glenn Maxwell Mitchell Marsh then added 40 runs before Marsh was dismissed. Haddin and Clarke were then involved in a good partnership till Clarke had to retire hurt. At 150 for seven, Australia were in danger of folding up before Ben Cutting hit a few lusty blows. Clarke resumed his innings as Australia managed to reach 209 for nine.

Zimbabwe made a spirited fight-back, and were well on course for a victory at 100 for 2. However, a spate of wickets left them in trouble at 106 for five before Malcolm Waller and Elton Chigumbura added 36 runs. They then lost two quick wickets again, but from 156 for seven Chigumbura and Prosper Utseya took Zimbabwe to victory with a tremendous 55-run stand as Zimbabwe won by three wickets with two overs to spare.

Just two days after their sensational loss to Zimbabwe, Australia were seeking redemption. AB de Villiers won the toss and put Australia in. The late Phillip Hughes put Australia in command with an excellent 85 off 92 balls, but despite his knock Australia were in danger of getting a mediocre score due to their average run-rate. Mitchell Marsh was batting on 29 off 31 balls at one stage, with two fours and a six. What happened next can only be described as absolute carnage. He hit three sixes in three balls of no less a bowler than Dale Steyn, and continued in a similar tempo. He remained unbeaten on 86 off 51 balls with five fours and seven gigantic sixes as Australia piled on 281 for seven.

In reply, South Africa lost a few early wickets, and at 101 for five, were in danger of folding up for less than 200. But the indomitable Faf du Plessis had other ideas. In partnership with Ryan McLaren, he added 73 runs in good time to keep South Africa in the hunt. He scored a tremendous 126 off 109 balls, and took South Africa to within striking distance of a remarkable win before being dismissed in tragic fashion. While trying to work the ball away for a single, he stepped on the stumps and dislodged the bails. He fell with the score on 214, as South Africa fell well short in the end. They were in the game for a long time thanks to du Plessis.

In what was arguably the most thrilling encounter of the year, Australia batted first after winning the toss. David Warner (56) and Steven Smith (77) scored good half-centuries, but Australia lost wickets in a heap. Glenn Maxwell (20) and James Faulkner (33) were the only other batsmen to get to double figures, as Australia ended at a middling 231 for nine.

In reply, Ahmed Shehzad (26), Sarfraz Ahmed (32), Asad Shafiq (50), and Sohaib Maqsood (34) all got off to promising starts but failed to carry on. No-one else was able to cross 20. Pakistan went into the final over at 230 for eight. Maxwell was asked to bowl the final over, with Pakistan needing just two runs to win off six balls with two wickets in hand. Maxwell started with a dot ball, and then went on to take the wicket of Sohail Tanvir with his second ball. He then bowled three dot balls in a row to No. 11 Mohammad Irfan, before the seven-footer found the leading edge to Faulkner. Maxwell had bowled a double-wicket maiden, and Australia won by one run!

India had won the first four ODIs, and were pushing for a whitewash come the fifth match at Ranchi. Virat Kohli was captaining the side in MS Dhoni’s absence, and was batting well throughout the series without getting to triple figures. Sri Lanka won the toss and batted first. India managed to take four early wickets, as Sri Lanka slumped to 85 for four. Angelo Mathews and Lahiru Thirimanne then put on 128 for the fifth wicket before Thirimanne hit Ravichandran Ashwin to Ambati Rayudu. Mathews then went ballistic, smacking the last five overs for 73 runs. He remained not out on 139 off 116 balls with 10 sixes and six fours, registering his maiden ODI ton.

India were off to a terrible start, with Rohit Sharma and Ajinkya Rahane both back in the pavilion with only 14 runs on the board. Ambati Rayudu, batting at No. 3, scored a useful 59, but the day belonged to Kohli. The Indian skipper held India’s innings together with a scintillating 139 not out off 126 balls. India lost a clump of wickets toward the end, but Akshar Patel gave Kohli support with a composed unbeaten 17 in an unbroken 57-run stand as India scampered through by three wickets with eight balls to spare. Sri Lanka bundled out for 407 in 1st Test at Christchurch; New Zealand need 104 runs to win 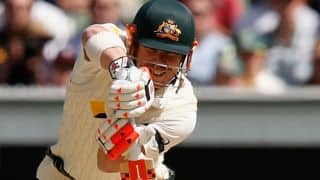