A look back at one of the most unusual sights in the history of County Championship.

June 10, 1899 saw nine Derbyshire cricketers take field in plain clothes against Yorkshire. Abhishek Mukherjee looks back at one of the most unusual sights in the history of County Championship.

There ran a story, possibly apocryphal, but too good to miss out on (it finds a mention in Andrew Ward’s outstanding book Cricket’s Strangest Matches). A random passer-by had apparently walked into the Dewsbury and Savile Ground without prior information about the status of the match. The following conversation ensued:

What really happened? Let us find out.

There was nothing extraordinary about the match. Going into the 1899 season, Yorkshire had won three County Championship in nine attempts and boasted of some of the finest contemporary cricketers. Derbyshire, on the other hand, were one of the weakest sides in the circuit. The inevitable followed.

Yorkshire were off the block quickly, Stanley Jackson (82) adding 77 for the second wicket with John Tunnicliffe and 82 more with Ted Wainwright for the fourth. To make things worse, John Young did not turn up before lunch (a substitute had to be used). The tail contributed as well, and though John Berwick and Billy Bestwick shared eight wickets between them, George Hirst stood tall, remaining unbeaten on 63 and helping Yorkshire reach 343 after being 222 for 7.

Wilfred Rhodes took out a wicket before stumps, and ran through the Derbyshire line-up with some support from Jackson and Schofield Haigh. Bill Storer (96) was the only one to put up some fight as the tourists were skittled for 203. Lord Hawke asked them to bat again.

Levi Wright and Henry Bagshaw got Derbyshire off to a 60-run opening stand when they followed-on, but once the partnership was broken, Rhodes and Hirst bowled in tandem (they shared 9 wickets between themselves) to bowl out Derbyshire for 171. There was no time left for the day, so a reluctant Yorkshire went back for another day. The Derbyshire cricketers, in all probability, prayed for overnight rain.

Yorkshire needed a mere 32. So far, so good.

A tap in the room above the visiting professionals’ dressing-room was kept on overnight. It went unnoticed, since the mains had been switched off. When they were switched back on at 6 in the morning, water began to flow; the groundsmen, busy in the ground, remained oblivious of the fact.

Once the upper room was flooded, water seeped to the room below. The two amateurs — Thomas Higson (Derbyshire captain) and Levi Wright — were assigned a different room, as was the norm of the day. But it was harsh for the professionals: the kits got soaked, as did the cricket gear, and by the time the professionals arrived, the floor resembled a swimming pool.

The local officials apologised profusely, but there was nothing to be done. There was no reason to call the day’s play off. Thankfully, Yorkshire needed a mere 32, so the nine professionals took field in plain clothes along with the two amateurs, clad in immaculate whites.

What would Derbyshire have done if the match situation was different? As Ward had rightly pointed out, “Had Yorkshire needed, say, 250 on the final day, it might have been an interesting debate.”

The ground witnessed a rare spectacle that day. Flannels and sweaters were left to dry across all clothes-lines and clothes-racks and pavilion rails in the ground. Boots and other playing equipments lay on the grass. And finally the men of Derby took field — the amateurs in whites, the professionals in plain clothes.

The professionals rolled up their sleeves, but had to preserve their trousers from grass stains. Unfortunately, they were without cricket boots, so the onus fell on the two amateurs to bowl. While Higson was a decent off-spinner, Wright’s only First-Class wicket (in a First-Class career that would span 325 matches) would come only next year.

To his credit, Higson managed to bowl John Brown with a mere 12 on the board, but Tunnicliffe and Lee Whitehead soon put Derbyshire out of their misery. The target was reached in 20 minutes off a mere 8.3 overs.

– Next morning Dewsbury Reporter came out in defence of the Derbyshire cricketers before they were accused of blasphemy: “It was out of no disrespect to Yorkshire that the Derbyshire professionals turned out in their everyday clothes, but because they themselves were the victims of an unfortunate accident which soaked their white apparel and seriously damaged not a little of their cricketing material in the way of boots, bats, etc.”

– Henry Bagshaw’s pullover took the most serious toll. To quote Ward, it “it shrank so much that it wouldn’t have fitted a small boy”. 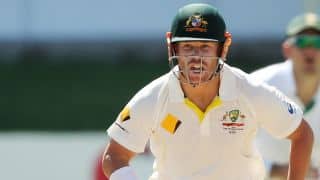