Yusuf Pathan: 10 interesting things to know about the Baroda basher

Yusuf Pathan: 10 interesting things to know about the Baroda basher

Yusuf is the older half-brother of Indian all-rounder Irfan Pathan. The brothers were brought up near a mosque in Baroda (now Vadodara).

Yusuf Pathan, born November 17, 1982, is an Indian all-rounder who was a regular member of the ODI and T20I team for a brief while. A useful off-spinner and a savage batsman capable of massacring bowling attacks, Yusuf was never able to cement his place in the national side despite a couple of match-winning performances. On his 34rd birthday, Shiamak Unwalla looks at 10 interesting things to know about the Baroda stalwart.

Yusuf is the older half-brother of Indian all-rounder Irfan Pathan. The brothers were brought up near a mosque in Baroda (now Vadodara) and played cricket together in the streets. Their family was far from wealthy, but Irfan revealed in an interview with CricketCountry that theirs was a loving family. Our father would say that he is very lucky. But, we say that we are very fortunate that we had such parents. We never complained. Whatever state we were in, our father never denied us anything. We were quite content. But, our father was a step ahead and would provide us everything.

Yusuf was a part of India s squad for ICC World T20 2007, but did not get a chance throughout the tournament as India preferred Dinesh Karthik and Rohit Sharma ahead of him. However, Virender Sehwag picked up an injury just ahead of the final and had to sit out against Pakistan. Yusuf was drafted in as his replacement, and opened batting on debut in a World Cup final! He scored 15 off 8 balls with one four and one six. He hit Mohammad Asif out of the attack early, thereby neutralising the man who had plagued India consistently. India went on to win the trophy and Yusuf became one of the few players to make his international debut in the final of an ICC tournament.

There are always certain players who revel under pressure. Yusuf is one of them. In an A-team triangular series in 2008, India A were reeling at 66 for 5 in 12 overs when Yusuf made his way in at No. 7 behind the likes of Robin Uthappa, S Badrinath, Dinesh Karthik, Suresh Raina, and Rohit Sharma. He was dismissed off the last ball of the 50th over as India finished at 305 for 8. Yusuf’s contribution was 148 off 123 with nine fours and as many sixes. India A won the match by 81 runs.

That was not the first time Yusuf showed the ability to bail his team out of trouble. It was certainly not the last time, either. The Duleep Trophy final in 2010 was played between South Zone and West Zone. Dinesh Karthik’s 183 helped South post 400. In reply, West folded for 251, with Yusuf hammering a 76-ball 108 with 12 fours and 5 sixes. Karthik scored another century in the second innings as South declared at 386 for 9, leaving West with a nigh-impossible target of 536. West started positively, but were soon in the doldrums at 294 for 5. Yusuf, batting at No. 5, then played one of the most outrageous innings possible. He blasted 19 fours and 10 sixes in an unbeaten innings of 210 off 190 balls, as West pulled off an unreal fourth-innings chase, ending at 541 for 7 and winning by three wickets.

There is little doubt that pressure brings out the best in Yusuf. When New Zealand toured India in 2010-11, India fielded a second-string side without Sachin Tendulkar, Virender Sehwag, or MS Dhoni. Under Gautam Gambhir, India had won the first three ODIs. The fourth was played in Bangalore. A savage 69-ball 98 not out from James Franklin helped New Zealand amass 315. Despite contributions from Parthiv Patel and Rohit Sharma, India were soon staring at defeat at 108 for 4 and later 188 for 5. Yusuf was not ready to give up though; with Saurabh Tiwary for company, he went all out against the Kiwi bowlers, and ended up smashing 123 not out off 96 balls to help India win by five wickets at a canter.

6. Man of Steel, Part 4: Mere days after whitewashing the visiting New Zealand 5-0, India travelled to South Africa. After four closely fought contests, the series was level 2-2. South Africa batted first in the series decider, and scored 250 for 9 in a rain-shortened 46 overs. The South African pacers ripped through India in overcast conditions, as India slipped to 60 for 5, then 119 for 8. Yusuf, batting at No. 7, was there at one end but wickets kept tumbling at the other. At 138 for 8 the match was seemingly over, when Zaheer Khan top-edged a pull and was seemingly dismissed for 5. Replays showed that Morne Morkel had bowled a no-ball. That slice of luck breathed fresh life into Yusuf, who suddenly started targeting the bowlers. His vicious assault caught South Africa completely unaware, as he raced to his second ODI ton. He was finally ninth out for 105 off 70 balls with eight fours and as many sixes, but India lost the match narrowly.

7. World Cup reward: Yusuf was rewarded for his outstanding performances with a call-up to India s squad for ICC Cricket World Cup 2011, beating out the likes of Rohit Sharma for a spot in the 15. Yusuf was preferred over Suresh Raina for the initial part of the tournament, and even played an important role in a tricky chase against Ireland. However, he was dropped midway through the tournament in favour of Raina. However, he went on to be a member of a World Cup winning squad.

8. IPL glory, Part 1: Yusuf was a revelation in Indian Premier League (IPL). Playing for Rajasthan Royals (RR) in the first season, Yusuf played a few blinders to end the season with 435 runs in 16 matches at 31.07 and a gargantuan strike rate of 179.01 with four fifties including a match-winning 68 in the final against Chennai Super Kings. In the next season, he played another outrageous innings from behind.

Mumbai Indians batted first and hit 212 for 6. RR were 66 for 4 in reply when Yusuf and Paras Dogra put up a phenomenal partnership. The duo amassed 107 in just over seven overs, with Yusuf hammering a 36-ball 100 with 9 fours and 8 sixes. Sadly for RR, it was not enough for them to win, but Yusuf’s reputation was set in stone. Yusuf’s ton was then the second-fastest T20 century behind Andrew Symonds’ 34-ball effort. It has since been bettered by LP van der Westhuizen (35 balls) and Chris Gayle (30 balls).

Yusuf was not done. Though he never managed to attain the same level of consistency with Kolkata Knight Riders (KKR) as he had with RR, Yusuf was still a vital part of the KKR line-up. He absolved himself of a poor season in 2014, in a crucial match against Sunrisers Hyderabad (SRH). KKR had to chase down the 161-run target in 15 overs to get the required net run rate to qualify for the play-offs. Coming in to bat at No. 4, Yusuf absolutely butchered a powerful SRH bowling attack comprising Dale Steyn, Bhuvneshwar Kumar, Jason Holder, Karn Sharma, and Parvez Rasool. Yusuf hit 72 off 22 balls with 5 fours and 7 sixes. He also got to his fifty off 15 balls the fastest ever half-century in IPL.

Yusuf and Irfan launched Cricket Academy of Pathans (CAP) in 2014. Greg Chappell is one of the coaches at the academy, which is meant to help young players develop their game. Yusuf was married in 2013 to a physiotherapist named Afreen, and the couple had a boy Ayaan a year later. He later told Mid-day that he would dedicate an innings to his son. Earlier this year, Yusuf tweeted a couple of pictures with his son. 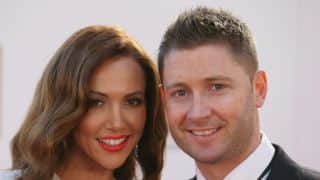