During the course of their 256-run alliance against England in the second ODI at Cuttack, Yuvraj and Dhoni became only the seventh Indian pair to make 3,000 ODI runs.

Karachi, 2006. The final ODI of the five-match series between India and Pakistan. Mohammad Yousuf and Younis Khan have scored attractive half-centuries to take Pakistan to 286. India are without Sachin Tendulkar, Virender Sehwag, and Sourav Ganguly. In their absence, Gautam Gambhir and Rahul Dravid open for India and put on a steady but placid 69 in 15 overs. Dravid goes on to score an 82-ball 50, but India s No. 3 Yuvraj Singh is batting fluently at the other end. His 50 takes only 52 balls, and comes up in the same over that Dravid is dismissed.

India have meandered to 146 for 2 after 31 overs, their run rate 4.70. They need 141 off the next 114 balls back in the days before T20 cricket reduced such targets mere afterthought. MS Dhoni is India s No. 4 this day. A wicket now would expose an extremely vulnerable lower-middle order. Only Suresh Raina and Mohammad Kaif remain among proper batsmen; after that it is down to Ramesh Powar, Ajit Agarkar, Zaheer Khan, RP Singh, and Sreesanth.

The next 11 overs produce 75 runs a good return, but not good enough. The required rate is now 8.25 per over. Both Yuvraj and Dhoni get the occasional boundary, but the Indian dressing-room would have been nervous.

At the start of the 43rd over, with India needing 66 off 48 balls, Yuvraj is on 87 off 83 and Dhoni on 33 off 37. Then the tempo suddenly shifts without warning. The batsmen free their arms. Fours and sixes flow like champagne. The match is over in the next 29 balls. Dhoni plunders 44 off his next 19 balls to remain not out on 77 off 56. Yuvraj, with an unbeaten 107 off 93 balls, is named Man of the Match and also Man of the series.

Two matches ago, the same duo had helped India chase down 292 from 190 for 5. Both men had remained unbeaten, Yuvraj with 79 off 87 balls and Dhoni with 72 off 46. They had helped India win with more than 2 overs to spare.Yuvraj scored 344 runs in that series at an average of 172 and strike rate of 97. Dhoni amassed 219 runs at a strike rate of 136.9, getting out only once in the series.

The two had batted together in the past, of course, and even won India 2 ODIs in and against Zimbabwe in the 2005 tri-series also involving New Zealand, putting on 103 and 158 to help India seal tricky chases after the top-order failed. But it was the series in Pakistan that really established Yuvraj and Dhoni as India s go-to ODI partnership of the mid-late 2000s.

During the course of their 256-run alliance against England in the second ODI at Cuttack, Yuvraj and Dhoni became only the seventh Indian pair to make 3,000 ODI runs. Their partnership average of 52.63 is only behind the Dhoni-Raina enterprise (58.5) among Indian partnerships worth 3,000 or more ODI runs.

Below is a table showing Indian partnerships with at least 3,000 ODI runs:

It has been almost six years since Dhoni and Yuvraj last produced a stand of 50 or above. That match, of course, was the 2011 World Cup final. Since then, Yuvraj has seen his career almost end more times than he would care to count, and even Dhoni has had his place in the side questioned relentlessly. The fact that both men shared their highest ever ODI partnership Yuvraj also registered his highest ODI score will give immense satisfaction not just to Dhoni and Yuvraj, but also to Virat Kohli and the Indian selectors.

But perhaps more than the people in charge of Indian cricket, this partnership will have provided boundless joy to the thousands of fans who grew up knowing that no match was out of hand as long as Yuvraj and Dhoni were in the middle. 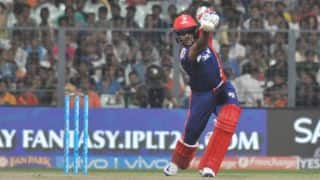