Yuvraj Singh had last scored a hundred against West Indies in the 2011 World Cup. Despite playing continuous cricket, MS Dhoni had scored a mere two since then.

MS Dhoni is on 93. Yuvraj Singh stands at the other end. Yuvraj looks relaxed at the other end. Dhoni plays the first ball to cover. The crowd cheers for a while before they realise there is not going to be a run. Chris Woakes goes back to his mark. He had jolted India earlier in the day with 3 wickets in the space of 10 balls. He had bowled consecutive maiden overs. He stands at the top the mark, stony-faced. He knows it has to be him, for none of the others have come remotely close subduing Yuvraj or Dhoni.

Dhoni does times the full-toss well. It soars into the stands over square-leg. Cuttack jumps and yells and cheers at the top of their voice for a Dhoni six can bring about only one emotion before it all went quiet.

Dead-ball: the ball had hit the spider-cam on its way. Technology has its merits, but on this day it took six runs away from Dhoni s career.

This time Woakes over-pitched it slightly, outside off. Dhoni s eyes lit up rhetorically, for seldom have they allowed emotion to get the better of them; the bat came down in an arc all-too-familiar with time; the ball could have gone only one way after that impact.

And as the bat rose, so did the eyes, and time rolled back… and back…

Why the d j vu? Have I seen something like this before, Dhoni hitting a massive six over long-on, eyes transfixed on the trajectory… Yuvraj standing at the other end… why does this all seem so familiar?

The single that got him to his hundred brought me back to 2017.

The newsroom went quiet before heaving a sigh of relief the moment Virat Kohli had got out. Finally, finally there will not be a need to write the obligatory end-of-day eulogy. They could finally write on someone else.

Within minutes the sighs turned into groans as Shikhar Dhawan walked back. I told you, I told you, murmured a self-proclaimed Kohli fan in the room.

Be honest: did any of you think both Yuvraj and Dhoni would roll the years back today? One of them doing it was still believable, but both, on the same day?

Yuvraj had last scored a hundred against West Indies in the 2011 World Cup. Despite playing continuous cricket, Dhoni had scored a mere two since then.

Both men were past their primes, said the critics.

Yuvraj had done nothing to earn a recall, said the critics. I was one of them, but then, even humble pies do not taste bad if Yuvraj serves them.

Dhoni should give way to youngsters, said the critics.

Yuvraj was coming back. Dhoni was not taking decisions for the side officially, at least for the first time.

Both men had failed in the first match. Kedar Jadhav had played a sensational innings at Pune, while Kohli, with another hundred, had assured the cricket fraternity that all was well with the world.

Kohli had failed today. India s case seemed to be doomed for good. Surely two ageing men at the twilight of their illustrious limited-overs careers would not be able to bail India out. That can surely not happen.

But Yuvraj had already embarked upon his journey. He smote Jake Ball for two boundaries in three balls.

But they happened. The fours came. Yuvraj, the man who owns the 45-degree angles: cover, mid-wicket, fine-leg, third-man. You can almost use his precision to teach geometry.

And Dhoni carried on, guiding balls down fine-leg and bludgeoning them past the bowler with the bardiche he calls a bat and gets away with the guise.

And they marched on, the two of them, runs coming in fours and sixes, sighs giving way to nods and smiles and subdued tears, landmarks whooshing by before you could tweet them, for this was a day like none other.

Yuvraj. Dhoni. Youngsters-turned-grownups-turned-senior-citizens of Indian cricket. Men who refuse to grow up.

The Peter Pans of cricket emerged amidst millions of nostalgia-soaked Peter Pans.

Yuvraj and Dhoni will go ballistic at the twilights of their careers when I will be in the newsroom, typing frantically, they never said. 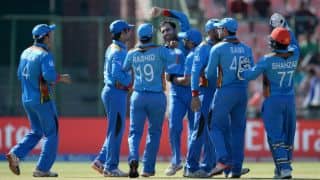