Karthik Parimal argues that selectors should persist with Yuvraj Singh a little longer.

Since his comeback in September 2012, Yuvraj Singh averages a dismal 18.53. Given his hunger and commitment for the game, Karthik Parimal argues that selectors should persist with the southpaw a little longer.

It was the first One-Day International (ODI) of the much touted series. At 60 for two, a juncture from where India needed almost 300 runs to win in a little over 35 overs, Yuvraj Singh strapped his gloves and braced himself to face an intimidating pack of fast bowlers, comprising of Dale Steyn, Morne Morkel, Lonwabo Tsotsobe, Ryan McLaren et al. Plenty can be deduced from a batsman’s walk out to the middle. The energy he displays — which can be in the form of a sprint, shadow drives or flick of wrists — before taking guard, often conveys the message that he means business.

But Yuvraj, devoid of his customary swagger and confident demeanour, strode out sporting what appeared to be droopy shoulders that night. If any one of South Africa’s fast bowlers and Yuvraj were to face-off in a boxing ring, the latter, it looked, would last less than a minute. Confirming this fact was the first ball he received from McLaren — a short delivery that smashed into his gloves before he could even fathom what was hurled at him. An in-form Yuvraj would perhaps have stylishly evaded it, or maybe pulled it in front of square, but this Yuvraj, clearly, was dragged out of his comfort zone.

However, it was the next ball that made for unpleasant viewing. From over the wicket, McLaren pitched one on good length, and Yuvraj, uncharacteristically, played all around the delivery, forming a glaring gap between the bat and pad in the process, to allow the ball to sneak through and shatter the timber. He walked back for nought after facing just two deliveries as India plummeted further into trouble. His out-of-form status, which was only spoken about in a hushed voice until then, has now become a serious cause for concern. How long can the Indian think-tank hold on to him?

Such situations are certainly not new to Yuvraj. He has made rousing comebacks, not only in the field of cricket. There have been times when, despite working hard for a year, things seldom went his way — the period before the 2011 World Cup being the case in point. It was Sachin Tendulkar who pulled Yuvraj out of the rut then with a forty-five minute pep talk that conveyed to the southpaw that he mattered to the team and that when it matters, he will matter the most. Yuvraj’s heroics thereafter are well chronicled. What will it take this time for him to break open the handcuffs?

Yuvraj was 29 at the time. Two-and-a-half years since, he no longer holds a reserved berth, even in the ODI squad, for noteworthy youngsters vying for that spot are significant in number. Since his return to cricket in September 2012, he averages 18.53 in ODIs — a statistic far from respectable. There have been only two scores of over fifty, during the course of which his elegance shone through. At the domestic front, he’s been ruthless, notching tons almost at will, but the inability to translate those scores on the international stage for quite some time has been worrisome.

Nonetheless, inkling lingers that persisting with Yuvraj could still pay dividends in the near future and, if circumstances permit, during the 2015 World Cup in Australia and New Zealand too. Of course, roping in him despite of a prolonged failure would be tomfoolery, but it wouldn’t harm to stick with him for the time being, at least. There is little over a year for that celebrated tournament to begin, and it would be sensible to include Yuvraj in the plans for at least two more series, including the current one, for this is the time to try all permutations and combinations. Moreover, like Mahendra Singh Dhoni said, “Once he gets a few runs, you’ll see a different Yuvraj Singh. He makes sure we win tournaments.”

It takes just one good, long hit in the middle to get back in the scheme of things, and Yuvraj certainly deserves that run. His commitment cannot be questioned — his voluntary training with Tim Exeter in Europe speaks volumes of that trait of his. Agreed, it’s been a while since the ball has sped to the fence after mellifluously making contact with the sweet spot of his willow, but for all his effort and experience, it could pay off to a be patient for a little while longer.

“If I fall, as I will, I look forward to dusting myself off and running again,” writes Yuvraj in his autobiography The Test of My Life. The time to do it couldn’t be better. 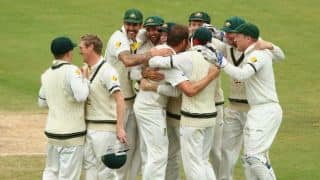