Once again the Indian fan has shown its true colours as he pelted Yuvraj Singh’s house with stones.

Once again the Indian fan has shown its true colours as he pelted Yuvraj Singh’s house with stones. Abhishek Mukherjee questions whether India has a right to call itself a sporting nation.

You have managed to do it again, dear Indian cricket fan. You have justified the etymology of the word “fan”: you have acted like true fanatics of the sport by pelting Yuvraj Singh’s house at Chandigarh with stones. You have had a hard week’s work, you have retired to your couches on a Sunday night for your three hours’ worth of entertainment, and since the event did not turn out the way you wanted it to, you decided to have some extra bit of sadistic fun.

You have made us ‘proud’ before. Over the years you have defaced the 1971 Victory Bat at Indore; you have pelted the Indian team bus with stones; you have thrown bottles to bring swift end to matches; you have burnt effigies; and finally, you have attacked the residences and families of the cricketers.

Fans in other countries are generally a meek lot. They discuss, they dissect, they cry, they swamp the social media. But you, dear Indian fans, you who have actually taken things up in your own hands. Someone from a less fanatic nation would merely have wished Yuvraj’s career had ended today. They would have argued on it over the beverage of their choice.

In other words, they would have kept it to themselves. It would have been a verbal banter — logical or illogical, vitriolic or courteous — among the fans. It would not have escalated to the cricketers themselves. That is the barrier you have managed to cross. You have been direct; you have assaulted them; you have attacked their houses and families; you have taken matters in your own hands!

Isn’t that what real men are about?

You mean business, Indian fans. Like taking “selfies” with cheerleaders in the background during Indian Premier League (IPL) matches; it is about painting your face in national colours and physically take on your neighbour for that day for the simple crime of hogging an extra armrest. That, after all, is what supporters are for.

It is not about being with the heroes when they lose form; it’s about putting them on the pyre and setting fire to them. Since the law will not permit that, you have chosen the next best thing: go to after their families. After all, one need not care whether the man in question is waiting anxiously a thousand miles or so away to know whether his family is safe for his crime of not being able to hit boundaries.

Do carry on, fans. Just a humble request, though: do not call yourself a sporting nation. Not that it will matters to you. After all, there are still many families left unharmed. 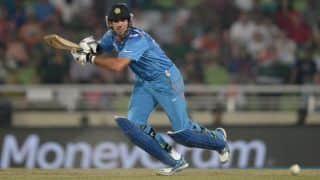