Yuzvendra Chahal became the third spinner to register a five-wicket haul in South Africa after Nicky Boje (5 for 21) and Muttiah Muralitharan (5 for 23).

South Africa had won 17 consecutive ODIs at home before running into this Indian side. Aiden Markram s captaincy debut was a forgettable affair for the hosts as they succumbed to their fourth largest defeat in terms of balls remaining courtesy Yuzvendra Chahal s five-wicket haul. Having won the second ODI at Centurion by nine wickets, India have taken a 2-0 lead in the 6-ODI series and extended their run as the No. 1 ODI side.

More wins this tour and Centurion delight: SuperSport Park, Centurion has witnessed some of the ecstatic moments of Indian cricket. Last month, Virat Kohli slammed a fine hundred here in the second Test and in 2003 World Cup, Sachin Tendulkar blazed away Pakistan at this very ground. This nine-wicket win adds another feather to their Centurion hat.

In 2010-11, India clinched the Johannesburg ODI by a run and then beat South Africa at Cape Town by two wickets to go 2-1 up in the series. South Africa won the next two matches to take the series 3-2.

South Africa lowest score at home: 118 is South Africa s lowest total in ODIs at home. Their previous lowest was 119 against England at Port Elizabeth in 2009.

2009, the last time SA played without AB or Faf: January 16, 2009 was the last time that a South Africa side did not feature AB de Villiers and Faf du Plessis. South Africa took on Australia in Melbourne and beat them by three wickets. (Note: Du Plessis made his debut in 2011)

Fantastic Chahal: Chahal, who registered his career-best 5 for 22, became only the third spinner to register a five-wicket haul in South Africa after Nicky Boje (5 for 21) and Muttiah Muralitharan (5 for 23).

Chahal s figures are second-best by a spinner in South Africa and he is the only wrist spinner to have achieved a five-wicket haul here. Chahal has just played two ODIs in South Africa, in contrast to Imran Tahir and Anil Kumble, who have played 29 ODIs each.

Chahal s 5 for 26 is also the second-best figures for India against South Africa after Sunil Joshi s 5 for 6 in Nairobi in 1999.

(Note: Despite the debates Muralitharan is categorised as a finger-spinner)

Co-incidentally, that too came against South Africa, in the African continent. The match I just mentioned. Joshi (5 for 6), Nikhil Chopra (3 for 26) and Vijay Bharadwaj (1 for 16) took nine wickets among them at Nairobi in 1999 to bowl out South Africa for 117. All three were finger-spinners.

(Trivia: That ODI was marked the debut of Bharadwaj and BoetaDippenaar.)

U19 World Cup winning captains facing each other as captain in ODIs:

Super Hash at SuperSport: When Hashim Amla reached 16, he surpassed Graeme Smith s tally of 861 runs to become the highest run-getter at SuperSport Park. Amla now has 869 runs here from 13 ODIs at 72.41. He has five ODI hundreds at this venue.

South Africa s only chance: India chasing 119 from 50 overs were 117 for 1 after 19 overs. South Africa could have still saved the game from here. How? South Africa were bowled out in the 33rd over, which meant the lunch break was delayed. Umpires had extended the play by 15 minutes and India were still 2 runs short. Match officials decided to break for lunch. (Ridiculous! But laws)

Had it poured and play did not commence at all, South Africa could have escaped with a No Result. DLS method can only be employed after 20 overs of play in the second innings.

Rohit Sharma s arid form in SA continues: Rohit got out to Kagiso Rabada for 15. This is the fourth time in six innings he fell to Rabada in this tour. Rohit now has 121 runs from 10 ODIs in South Africa at 13.44, by far his worst show in any country where he has played more than two ODIs. 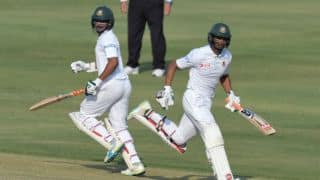