If the Melbourne Test witnessed a spirited Indian bowling performance, Michael Clarke & Company wiped away those beliefs as they thrashed them at Sydney. The bowling that looked threatening and consistent during the first Test was listless and devoid of any guile during the second. 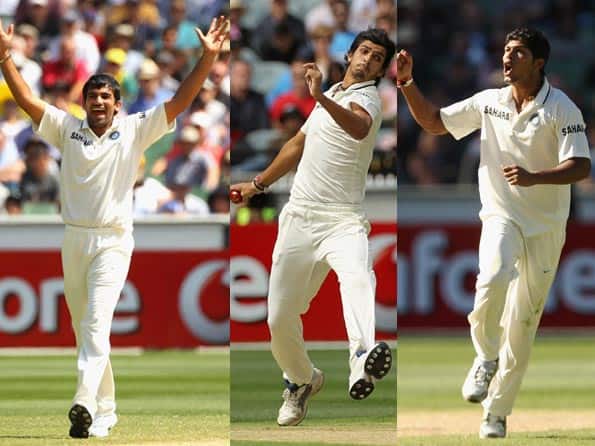 If the Melbourne Test witnessed a spirited Indian bowling performance, Michael Clarke & Company wiped away those beliefs as they thrashed them at Sydney. The bowling that looked threatening and consistent during the first Test was listless and devoid of any guile during the second. However, the ‘supposed’ fastest pitch in the world at Perth presents them with an opportunity to make amends and restore their direction in an endeavour to rattle the Australian batsman.

Zaheer Khan, Ishant Sharma and Umesh Yadav have their work cut out on the (Western Australian Cricket Association) WACA surface. Being a fast bowler’s haven, the trio need to strike big and deliver the goods for India. The debacle at Sydney needs to be put behind and they should look forward to a fresh start on a helpful surface.

When India won the Perth Test of 2008, the fast bowlers’ performances were decisive in the ultimate result. Anil Kumble bowled well and Virender Sehwag chipped in with crucial blows during Australia’s run-chase, but it was the pacemen who confirmed their might on the WACA pitch. Rudra Pratap Singh, Irfan Pathan and Ishant Sharma bowled in the right channels and were consistently troubling the batsmen.

Footage of that game shows that Indian pacers bowled on a length or relatively fuller, on and around the off-stump. On a fast surface, such a line is difficult to get away as the margin for error for the batsmen is minute. A small mistake and he can end up edging the ball to the keeper of the slips. The Indian seamers induced the Australians to make errors. The batsmen were invited to drive on the front-foot or lured into poking at deliveries outside off. Ishant’s spell to Ponting was the finest example of this tactic.

Four years after the victory, Ishant is the only bowler who has survived to play another game at Perth. The task on his hand is a bit different this time around as he is experienced and has set a benchmark for himself. However, he is struggling to pick up wickets although he has been troubling the batsmen on a number of occasions.

The West Indies tour last year was his moment in the sun as he picked up 22 wickets, but since then it has been a downward curve. Since the Birmingham Test against England, Ishant has failed to scalp more than two wickets in a match. In his last seven Tests, Ishant has dismissed only 10 batsmen which is an alarming trend considering his status as one of India’s strike bowlers.

The atmosphere at Perth may help bring happy memories for Ishant as this was the venue where he announced his arrival at the world stage. That confidence has to be translated into a strong performance. On that wicket, he can use his height to purchase steep bounce which can be a handful. If he starts hitting the right areas on a more consistent basis, it would be déjà vu 2008.

At the start of the series, India had kept their fingers crossed over Zaheer’s fitness and the likelihood of him playing more than two Tests. Those fears would have calmed down a little as he is set to feature at Perth. Given his experience and prowess with both the new and the old ball, Zaheer would be licking his lips at the thought of bowling at the WACA.

Zaheer’s three early strikes at Sydney highlighted his comfort at bowling to the left-handers. With some assistance from the pitch, he would be looking to repeat similar feats with the new ball to put pressure on the Australians. Swing should be his biggest asset and focus as the late movement can account for quite a few batsmen. On a faster surface, the same late movement would be difficult to pick and adjust to as it would arrive a touch quicker at the batsman. Having said that, India also needs him to strike with the old ball with his uncanny reverse swing.

Coming to Umesh Yadav, India would be a little worried about his economy rate as he is conceding far too many runs for the liking. He is a wicket-taking bowler but there are times when he gets a bit wayward and allows the batsmen to get settled. He is a much better bowler when he pitches the ball on a fuller length and he has to emulate what the Indians did in 2008. With his pace, he can rattle any line-up but only if he is accurate and hits the right channels.

In a nutshell, the main aim of the Indian fast bowlers should be to bowl consistent line and lengths. Once they start getting a bit wayward, the batsmen would have no difficulty in picking their gaps. The outfield at WACA is lighting quick and the ball races away to the boundary. If the bowlers shift off course, they can get seriously tapped and find the ball flying to all corners of the ground.

The other thing the Indians should worry about is cleaning up the tail. Perth may be a fast surface but batsmen can score if they play their shots. In 2008, Mitchell Johnson and Stuart Clark fought hard as India made heavy weather of wrapping the match. The win was achieved comfortably but even today, the Indians struggle to bundle the lower order.

Bundling out the tail isn’t as big a task as the Indians make it look. They seem to go off radar once the sixth wicket of the opposition falls. If they bowl with the same vigour and persistence to the tail as they do to the top order, the clean-up job would be a cinch.

It's customary for groundsmen to drink on eve of the match: WACA chief