Zaheer Khan averages 39.50 with the ball, with a strike- rate of over 80 since the England tour

Zaheer Khan averages 39.50 with the ball, with a strike- rate of over 80 since the England tour

Zaheer Khan’s rise as a champion pace bowler had been one of the key factors in India’s climb to the peak of the Test world. Arunabha Sengupta analyses to show that since last July he has declined alarmingly, which has been one of the main reasons for India’s plummeting fortunes. Kab tak hai, Khan? … Zaheer Khan’s increasing impotence with the ball is reflected in the starts that the opposition teams have been enjoying © Getty Images

Zaheer Khan’s rise as a champion pace bowler had been one of the key factors in India’s climb to the peak of the Test world. Arunabha Sengupta analyses to show that since last July he has declined alarmingly, which has been one of the main reasons for India’s plummeting fortunes.

From the top of the Test world, the plummeting descent to the depths of despair has taken less than two years.

If we look closely, we will find many reasons for the U-turn of fortunes since last summer, the sudden determined plunge from the top of the leader board to very near the nadir. The openers, touted to be the best India ever produced, suddenly fired off a sequence of double blanks. The middle-order aged together and the three amigos were seldom successful in unison. Sachin Tendulkar slowly found it difficult to score the same runs that he would have earlier rattled off in his sleep. And all of a sudden the country woke up to realise with a start that Anil Kumble’s feats cannot be replicated by anyone claiming to spin the ball.

However, if one looks for a watershed moment that defined the start of the fall, the image of Zaheer Khan limping off the ground at Lord’s looms large as epochal.

India’s rise to the pinnacle of the Test world did come with the blessed confluence of all the batting riches and the magic of the spin department, but Zaheer Khan’s contribution as a spearhead in the pace department was perhaps the cutting edge.

In fact, India’s transition from a very good to a great side between 2007 and 2011 coincides with Zaheer’s rise from a useful opening bowler to a champion wicket taker.

From 2000 to 2006, India won 28 and lost 19 of their Tests – aided and abetted by a deluge of series against Zimbabwe and Bangladesh. If we take the minnows off the charts, during that period they won 19 and lost 18. They were a good side with talented batsmen and spinners, but not exactly great. During this period, Zaheer captured 126 wickets at 36.10. He was the 21st on the list of pace bowlers of the world.

From early 2007 to the summer of 2011, India won 21 Tests and lost just 10 – with only one series against Bangladesh to bloat the figures. They played like true champions. And during this phase, Zaheer Khan was the second best pace bowler in the world, after Dale Steyn, with 144 wickets at 27.90 at a strike rate of 51.50. He also took seven five-fors and claimed the only 10-wicket haul in a match in this excellent period. 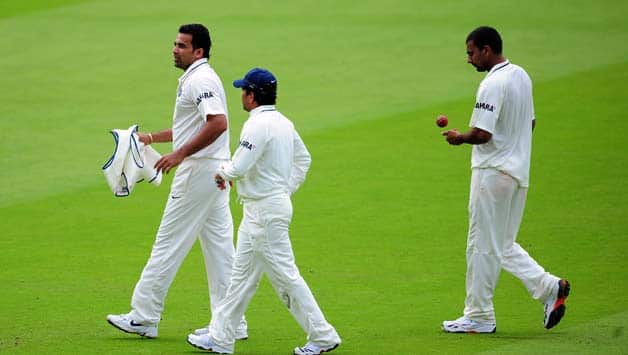 Zaheer Khan (left) leaves the field with an injury during day one of the 1st npower Test between England and India at Lord s on July 21, 2011 © Getty Images

Since the day he hobbled off at Lord’s, clutching his painful hamstring, the results have been increasingly alarming. He did come back to take 15 wickets in Australia, but on those fast wickets the scalps came at an expensive 31 runs apiece. Since that fateful July day in London, he has a bag of just 22 wickets at an average touching 40, with an embarrassing strike rate of 80.60.

It was the ability of Zaheer to swing the new ball, reverse the old and come sharply off the wicket that had been one of the key factors in India’s triumphant run in Test cricket. His decline, along with the absence of a suitable heir, is one of the glaring holes in the team.

Zaheer’s increasing impotence with the ball is reflected in the starts that the opposition teams have been enjoying.

The opening batsmen playing against India put on 39.40 runs on an average during the Indian dominance of 2007-2011, with just 7 century partnerships in 91 innings. Since July 2011, however, as Zaheer Khan has declined steadily, they have been scoring at 55.54 and have already had five hundred stands in 25 innings.

No one really expects Zaheer Khan to set the cricket grounds on fire with his bat. Yet, as one of the most experienced campaigners in the side, and as someone who is no mug with the bat, one expects him to put a price on his wicket. For someone who has a highest of 75 in Tests, Zaheer has been averaging 6.73 with the bat since the English summer last year © Getty Images

In that respect, the man who once scored 75 as the last man has shown pitiable lack of application in his increasingly short stints at the crease. Since the English summer, he has scored 101 runs in nine Tests at an average of 6.73. This includes five ducks among 11 single digit scores.

To a certain extent, the batting failures also indicate that Zaheer is not in the ideal mental or physical condition to be the fighting cricketer that he once was.

To continue to be a world beating side, Indians need an incisive opening bowler, always good for a few quick and early wickets, who can be counted upon to provide important breakthroughs when needed and tear through the opposition side every now and then.

Joe Dawes, India’s bowling coach, recently went on record saying that Zaheer Khan is one of the best six bowlers in the world, that Indian bowling is headed in the right direction.

Statistics, however, tell a drastically different story. As shown above, during the last year and a half Zaheer has not been in the top 20 even if we consider only pace bowlers. And with Ravichandran Ashwin putting up his third bowling hundred on the trot on turning tracks, Indian bowling is fast sinking into a frightening quagmire.