Zaheer Khan's exclusion from India Test squad for England tour: End of road for pacer with national side

Zaheer Khan's exclusion from India Test squad for England tour: End of road for pacer with national side

Age and injuries have caught up with Zaheer Khan.

Zaheer Khan was excluded from the India Test squad for the 2014 tour of England from July onward. This shows that the Board of Control for Cricket in India (BCCI) have taken a major step in selecting an Indian Test squad looking ahead to the future. Zaheer has been India’s best bowler over the last eight years, but injuries and lagging form have seen his career tail off recently. Shrikant Shankar writes it is all but certain that the left-arm swing bowler’s international career has come to an end.

As the Board of Control for Cricket in India (BCCI) announced the Test squad for the tour of England, many eyebrows were raised. Gautam Gambhir was included after an 18-month hiatus; Robin Uthappa only made the One-Day International (ODI) squad for Bangladesh, six medium-fast bowlers were selected; it was actually an 18-member squad; and more importantly Zaheer Khan was dropped.While it is not entirely clear whether the exclusion was due to his muscle strain suffered during the Indian Premier League (IPL) 2014 or the selectors looking to the future without the 35-year-old fast-medium bowler, it is almost certain that a glorious international career has all but come to an end.

The last four Tests India played featured Zaheer – two each away in South Africa and in New Zealand. This includes 16 wickets in total. But apart from some spells, he did not look the Zaheer of old. India’s next assignment was against England in 2014 from July onward. This is as big as it gets for India when it comes to Tests away from home. This was also not the concise Test series played in South Africa and New Zealand. It is a sort of proper old-fashioned five-match Test series. India’s downfall in away Tests started in England back in 2011. Zaheer was ruled in only the second session on Day One of the first Test at Lord’s in that tour.

It not only looks like Zaheer will never play another Test in England, but also that he will not play another Test for India. The selectors may have named the squad while keeping an eye on the future, but only MS Dhoni, Gambhir and Ishant Sharma have played Tests in England before. The squad seriously lacks of international experience. Plus it is an 18-member squad – quite uncommon even for a five-match Test series. This automatically catapults the likes of Bhuvneshwar Kumar and Mohammed Shami as the senior members of the fast bowling line-up along with the enigma that is Ishant.

This certainly leaves Zaheer no way back into the Test squad. India also travel to Australia in 2014-15. This is probably India’s second biggest away tour. This will be followed by the ICC World Cup 2015. India are the current Champions Trophy holders – a feat achieved without Zaheer. They almost won the ICC World T20 2014 as well. The international future does not look bright for the left-arm bowler, who became of the best fast bowlers for the last decade or more. India replaced Javagal Srinath with Zaheer.

He could swing the new ball and the old both ways. He could get movement off the track. He was one of the best in batsman-friendly conditions and even better in bowler-friendly ones. He was not the quickest, but was quick enough to take 610 international wickets. He won India a World Cup and helped them become the No 1 ranked Test team in the World. Unfortunately, age and injuries caught up with him and we have probably seen the last of Zaheer in India colours. Good luck to whoever is tasked with replacing him, because it is not at all an easy one. 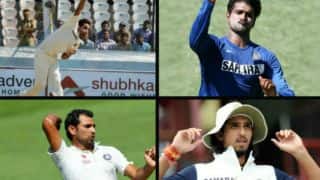 India Test squad for England tour 2014: Too many fast bowlers can act as hurdle